Technology and the culinary industry have been natural allies throughout history. From new tools and appliances to advancements in our scientific understanding of food, these innovations have helped chefs lighten their workload, augment their creativity and enhance the experience of eating. 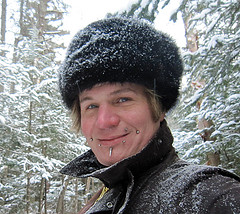 Now more than ever, technology is setting new standards for how we cook, and ICE alumni are the ones leading the charge. In particular, Florian Pinel, IBM Senior Software Engineer and a graduate of the ICE culinary program, is at the forefront of this revolution, leading the research team for Watson's "cognitive cooking" project. But back when he was a student at ICE, Florian never imagined that he'd be the tech expert behind the world's coolest food truck.

What were you doing before enrolling at ICE?

I was working in the research division at IBM. I began there in 1999 after graduating from university in France. I was spending most of my weekends cooking at home, but I wanted to take my skills to the next level and work in a restaurant, with the idea of possibly opening one of my own someday. I checked out the major culinary schools in New York and chose ICE because it offered the best options in terms of program quality and schedule. I graduated in 2005.

I did my externship at Danube—a Michelin-starred Austrian restaurant of David Bouley's (now closed). Since I was still working at IBM during the week, I worked on weekends and, on some occasions, weekday nights. Around the same time, I saw quite a bit of Cesar Ramirez, who was chef de cuisine next door at Bouley (before he moved on to open Brooklyn Fare).

What have you done professionally since graduating?

I continued working at Danube after my externship for almost three years until the restaurant closed in 2008. During that time, I rotated through all the stations in the kitchen: cold apps, hot apps, deep-fryer, seafood, and meat. Regretfully, I never made it to the pastry station: the desserts at Danube were great (Alex Grunert, the pastry chef, went on to work at Blue Hill at Stone Barns). When I create savory dishes, it's easy to manipulate those ingredients to do what I want, but pastry is still sometimes a struggle: there's a lot of experience and imagination needed for pastry work, in particular when it comes to achieving the perfect texture or an appealing plate composition. After Danube closed, I realized I was having a great time creating my own recipes, and eventually started a food blog, foodperestroika.com. The focus is on Eastern Europe and combines recipes, restaurant reviews, and travel reports. Throughout that time, I was still working at IBM, and I began research for the Cognitive Cooking project about two and half years ago.

I think the best accomplishments are the ones still to come!

Briefly describe a day in your current career.

With all the interest in the IBM Food Truck, my days have become much busier in the past few weeks, and my schedule is packed with interviews, meetings and a lot of software engineering. While juggling a wide range of media requests, we've been simultaneously working to transform our prototype into an application that consumers would feel comfortable using in their kitchens every day. My favorite projects are those that involve helping someone create new recipes with our tool for an event. That's when I get to do some hands-on work in my kitchen or pay a visit to James Briscione and Michael Laiskonis at ICE to see what they can come up with.

That IBM doesn't make computers anymore! Or that you can work at IBM and wind up creating cocktails as part of your job.

At IBM, I'd like to deliver a cooking app that's useful to home cooks and chefs alike, and later investigate how computers can help us be creative in other domains. For example, can computational creativity help us take better pictures or create more exciting travel itineraries? Outside of that, I'd love to have an opportunity to write a cookbook! I have plenty of recipes on my blog, and tons of recipe ideas in my notes that I hope to try someday.