ICE alum Anna Monaco is now the General Manager of the recently opened Shake Shack New Haven. ICE President, Rick Smilow stopped by the restaurant on opening night to enjoy a burger and is pictured above with Anna and Shake Shack founder, Danny Meyer. Below is an interview with Anna on her new exciting role and how she got there. 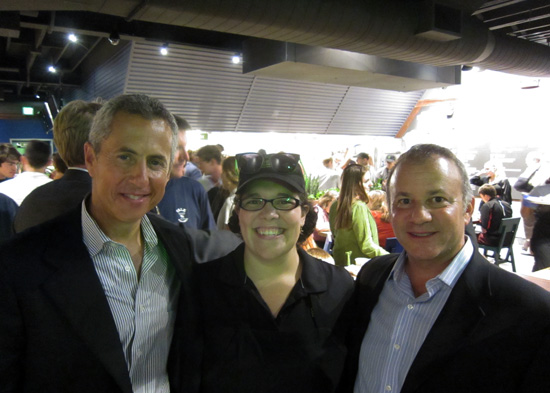 What was your biggest take away after attending Peter Kump New York School of Cooking (now ICE)?

If you love what you're doing, the people around you will love what you're doing too.  I have friends from my culinary arts program class who I still see and we have 'clean out the fridge' parties.  We use everything we can find in someone’s fridge and make the most insane meal out of it (Brussel sprouts with pancetta, guacamole with cucumbers, onion soup, manicotti and orange glazed chicken - and that's just the appetizers!).  Cooking and eating is such a communal event that brings people together, how could you not love what you're doing!

Chef Einav Geffen was my instructor for both the first and last section of the culinary arts program.  She saw us as green, newbies learning fabrication of fish and beef and then saw us as graduates who could cater their own cocktail party for graduation.  She had such passion in everything she did and it was so inspiring to see.

She pushed us beyond our limits and I know that my whole graduating class would agree that we are better people for having met her and had the privilege of being taught by her. From my management course, Neal Bermas taught me that doing something simple well is always better than doing something complicated poorly.

From opening bars to steak houses and everything in between, we looked at restaurant after restaurant and discussed menus, marketing strategies, budgets and so much more and found every time that those who fail in this industry are not able to bring things back to basics.

I still think about opening my own restaurant someday and know that if I do, Neal's voice will be in my head questioning each decision I make and pushing it to be the best restaurant in its field.

Why did you go to culinary school?

I went to culinary school because food fascinates me.  I still remember the first food book I ever read.  It was a book about olive oils from around the world that I found at my grandparents' house and I asked to borrow it.  Learning about food, where it comes from and how different cultures eat and incorporate it into their daily lives is incredibly interesting to me.  I still have that olive oil book!

How did you make your way to GM at Shake Shack?

4 years ago - actually 4 years ago to the day 9.30.08! I went into the Upper West Side Shake Shack location on a rainy morning in response to a Craig's List ad (at the time, it was more of a construction zone than a restaurant).  I was interviewed by 2 of the managers there and was hired on the spot for a line cook position.  I worked my way to supervisor quickly and was then approached about managing the first non-conventional Shake Shack at Citi Field the following spring.  I happily accepted!  I spent the following 81 home games traveling to Flushing for doubleheaders in August, subway series madness and too many team rivalry fights to count.

From there I helped open another 6 restaurants before moving to New Haven to open the Westport location as AGM.  Serendipitously, they decided to open a location 4 blocks from my apartment and I pounced on the opportunity!  I have been fortunate enough to find a job (and career) where I respect the people around me and they respect me.  It is such mutual love!

What sets Shake Shack apart from other burger hot spots?

I have listened to Danny Meyer give talks about this company so many times and it really comes down to the way we make people feel.  Other burger hot spots are using great products just like Shake Shack.  Some of them even get their burger blend from the same butcher almost every Shake Shack gets their blend from.

The products are high quality and we really care about them - but so does everyone these days.  We believe that we are providing a full experience, not just the delicious food (which believe me, is amazing!).  How many times have you gone into a fast-casual restaurant and came out talking more about the people who took your order and gave you your food than about the actual food you ate?  How many times have you come away talking about the cool atmosphere and design of the place?  Few other internationally known restaurant groups have that ability.  We have the unique benefit of being born out of a fine dining mother company and take that to heart in every guest interaction we have.

What is your best advice for those interested in the food scene?

Be sure you are really committed.  I have found that people in this industry work hard and play hard and for some, it becomes more of a job and less of a passion.  You will work weekends.  You will work holidays.  You will work hours that make you weak in the knees...literally.  But, there is NOTHING better than seeing a child take their first bite of a burger you cooked and watching in excitement as they devour the rest of it.

There is nothing better than being the place where a guest wants to bring in his former college a cappella group to serenade his girlfriend for her birthday.  We are a part of people's happiest memories; their anniversary dinners, their birthday parties, their first dates and it is such an honor to be invited into people's lives like that.  The smiles on our guests' faces melt away the problems of the day, the crazy schedules and make every second of that hard work worth it.

What is your favorite thing on Shake Shack’s menu?

Here in New Haven, we actually have a special menu item that no other Shake Shack has permanently; the Handsome Dog.  In tribute to Yale's mascot, Handsome Dan, we took our all beef hot dog and griddled it crisp, just like the rest of our hot dogs, and topped it with our Shake Shack cheese sauce and crispy fried shallots.  I mean, could there be anything better than that??!!