Even the best chefs struggle to create menus.

During a demo at ICE Yesterday, Alexandra Guarnaschelli, the executive chef at New York City’s Butter, admitted, “Sometimes I think my food isn’t as good as it could be.” It’s hard to imagine that she ever suffers from ‘chef’s block.’ Not only was she an ICE Chef Instructor, she has been on Iron Chef America, Food Network Challenge, Chopped, and she currently hosts The Cooking Loft and Alex’s Day Off. Luckily, she has discovered how to unlock her best ideas and she shared some with the audience.

When asked about her style, she said, “I recently described my cooking as French-American to restaurateur Danny Meyer. He asked me ‘What’s French about it?’ I realized it’s really American with French and Italian techniques and styles.” Having worked in Paris for seven years (five of those at a Michelin three-star restaurant), as well as at Daniel Boulud’s Daniel, Guarnaschelli knows her way around a rigorous kitchen and classical techniques. While her training is French and she grew-up eating Italian, her passion is for seasonal and local ingredients, “I like to cook with what Mama Nature is coughing up.” 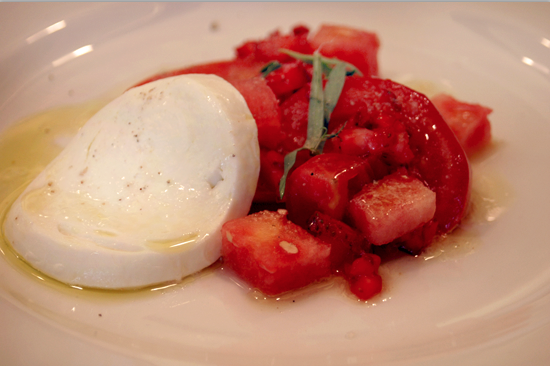 Her experience has taught her to let the ingredients speak for themselves. The dishes she prepared at the demo yesterday were a prime example of her ingredient-driven cuisine. The audience watched attentively as she prepared Pasta with Yellow Tomato Sauce and Spicy Lamb Sausage, Tomato and Watermelon Salad with Mozzarella and Mozzarella Whey Dressing and White Chocolate Catalonia Cream. Guarnaschelli emphasized adapting to local ingredients to get the best results. For example, some of her favorite ingredients are dairy, saying, “I ask myself ‘Why do other food groups have to get in the way?’ ”

The audience was fascinated as she demonstrated how to make fresh mozzarella. Her favorite local source is Milk Thistle Farms, “Their milk is so good you have to drink it privately. Say goodnight to everyone, go home, shut the blinds and enjoy.” And her secret to coming up with new dishes? Simple. “I go to the market, buy a lot of food and eat it.” Exploring the market helps get her creative juices flowing, adding that picking up a turnip is often enough for her to breathe a sigh of relief. Also, she recommended letting someone else cook dinner and going out for a meal, comparing it to “putting your brain in a hammock.” And if that doesn’t work? “I watch episodes of Six Feet Under until I feel better.

Find out more about Alexandra Guarnaschelli online and get the latest updates on her Facebook fan page and Twitter feed. Learn more about Butter online.