This ICE Alum Uses Her Culinary Diploma as a Registered Dietitian

Abbie Gellman (Culinary, ‘01) always had an interest in nutrition, but she worked in hospitality consulting and pursued a culinary diploma before training to become a registered dietitian. Now, she combines all her experience to run a company that includes private cheffing, product and recipe development, workshops, speaking engagements, and a new cookbook.

“Every day is different. If I had to do the same thing every day, I’d be so bored,” Abbie says. Thanks to multiple degrees and years of experience, the New York City-based chef doesn’t have to. For the past five and a half years, Abbie has been working for herself in a handful of capacities that capitalize on her multifaceted expertise in culinary nutrition.

She works as a private chef for people with health issues, delivering personalized meals designed to target conditions like ulcerative colitis or diabetes. She also helps her clients with meal planning and cooking lessons.

Abbie develops products and recipes. She’s the health-focused, research and development, consulting chef for Happi Foodi, a frozen food company for whom she created lines of vegan, low-carb and Whole 30-compliant meals, which are sold in Walmarts across the country. She creates recipes for magazines like Food & Nutrition and Diabetic Living, as well as for brands and commodity boards. She’s worked with the National Watermelon Promotion Board, the National Cattlemen's Beef Association, Quaker and California Cling Peaches. For these clients, as well as for her own brand, Abbie films cooking and nutrition videos. 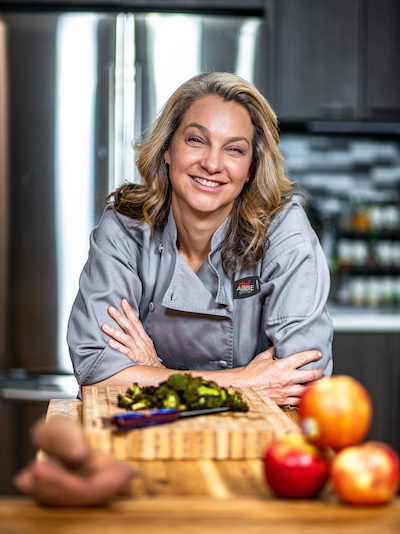 Through webinars, workshops and speaking engagements, Abbie shares her knowledge and teaches health professionals how to combine culinary skills and nutritional science to help people cope with various disease states and life stages like aging. She also provides guidance to fellow registered dietitians and physicians on how to develop recipes and film an effective demo.

On top of all these projects, Abbie contributes writing to Livestrong, and she’s on the Jenny Craig Science Advisory Board. “Of course there’s also the regular upkeep of a business,” Abbie says. “Every Sunday, I have to upload a new recipe and blog and post them on every social media channel, and I put out a monthly newsletter.”

Somehow, Abbie still had time to release a cookbook. "The Mediterranean DASH Diet Cookbook: Lower Your Blood Pressure and Improve Your Health" takes the famous DASH diet and gives it a Mediterranean diet approach. “Those are the top two best diets every year in the U.S. News & World Report, and they’re generally the top two diets that are scientifically backed as sustainable lifestyle practices for staying healthy,” Abbie explains. The book offers 100 recipes for breakfasts, soups, salads, entrees and sweets. There are also chapters that address the science behind Abbie’s food and how this type of combined diet works in relation to health issues.

In order to achieve this impressive roster of gigs, Abbie spent years gaining experience and education. She started at Cornell University, where she earned a bachelor of science in hotel administration and finance. There, she took her first nutrition class. “By my freshman year, I was interested already in the body and nutrition, but all the stuff I learned in school for cooking was very food science-y,” Abbie says.

When she graduated, she moved to New York City and worked in hospitality consulting at PricewaterhouseCoopers, a position that was financial and operational in nature. All the while, Abbie was thinking about nutrition and cooking, so she decided to pursue a culinary diploma. “I wanted to have better base knowledge of cooking,” she says.

Abbie completed the Culinary Arts program at ICE in 2001 and worked in restaurants for a couple of years, both in the front and back of house, while still drawn to nutrition. “The restaurant space wasn’t giving me what I needed. At that time, there weren’t really healthy restaurants. It wasn’t a thing yet,” Abbie explains.

She returned to PwC to do food and beverage consulting for a few years and then worked at Goldman Sachs doing restaurant equity research before she finally listened to the voice in her head.

“I decided to go back to graduate school and just take the plunge and figure out how to make a career in culinary nutrition. I wanted a master's degree. I wanted to learn the actual science of it and be able to incorporate culinary and nutrition in a valid way. I didn’t want to be a health coach or something — I wanted the science,” Abbie explains.

Before she could start graduate courses, Abbie had to take three semesters of chemistry, anatomy and physiology, and other undergrad prerequisites. Then she spent two years earning her master of science in nutrition at Teachers College, Columbia University. This period in school was followed by a year-long internship at NewYork-Presbyterian Hospital, which allowed her to become a registered dietitian. Altogether, this aspect of her journey lasted four years.

“During that time, being around dietetic students, I realized that most of them don’t cook. Still, few dietitians nationwide have actual culinary degrees or have worked in food service or professional kitchens in any capacity,” Abbie says. She knew that her culinary experience provided her with a unique skill set that positioned her well for the career she desired.

“I think it was important to do a traditional culinary program because now I’m very comfortable cooking anything,” Abbie says. “I use what I call a food-first approach. I work in nutrition, which is all about eating food. I’m supposed to tell clients what they should and shouldn’t eat and why. I can give them a meal plan and a menu and teach them how to roast vegetables and how to cook fish. I can give them usable resources, advice and information that is approachable and practical because I went to culinary school and I cook every day. I’ve spent 20 years cooking and determining the shortest, easiest way to make something healthy and taste good.”

Abbie learned all the basics, from sauces to meat and poultry, at ICE. To this day, she still uses the flavor pairings that she was taught here. Abbie also remembers a small class size, which allowed her to have ample interaction with instructors. She thoroughly enjoyed her time at ICE and frequently uses her culinary education, saying it’s the ability to cook that’s pivotal for people who work in nutrition.

Years of working with food have provided Abbie with the basics and so much more, which distinguishes her among her colleagues. “Registered dietitians with culinary diplomas have a more practical approach to nutrition. It’s more user-friendly,” she says.

Now, Abbie is a leader in the culinary nutrition field. There’s no telling what she’ll conquer next.

Pursue a career that combines Culinary Arts and nutrition with ICE's Health-Supportive Culinary Arts diploma, or certificates in Culinary Nutrition and Food Therapy.