Last week ICE was treated to a very rare spectacle – a live butchering demo of an entire half steer by Master Butcher Rudi Weid.

Rudi is a third generation New York butcher and a truly skilled artisan. For decades, beef has been sold in smaller cuts, with waste and bone already removed, dwindling demand for professional whole animal butchers. While we watched Rudi nimbly break down this beast into its base cuts, he led a discussion on the issues at play in modern cattle production. 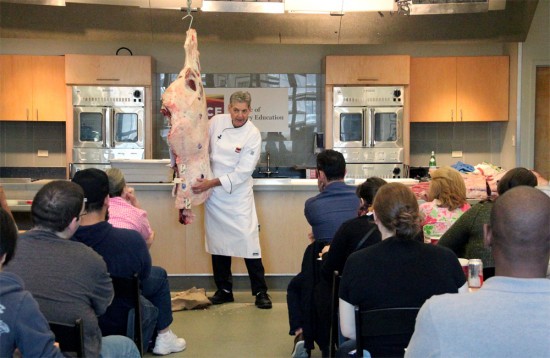 First ICE had to procure an entire half steer—an increasingly difficult task. Cows are processed almost immediately into the individual cuts that we see on restaurant menus and in grocery stores. Whole animals are increasingly rare, in part because our half steer was likely to yield only 30% in edible product after removing bones, excess fat and inedible connective tissue—a fact that explains why so few chefs and even butchers desire whole animals. We turned to Jobaggy Meats, one of the last remaining actual meat packers in the meatpacking district. Ours was a 375 pound choice half steer in three pieces (to keep it whole would be far too unwieldy for transport).

For the lecture, we hung the steer's hind quarters from the ceiling, and dove into a discussion on meat labeling. Prime is the ultimate in beef quality, indicating a young, well-fed cow with high fat content. These cuts often fetch 5 times the price of Choice or Select meat due to the rich fatty marbling. Our steer was choice, meaning it had less fat and its cuts could be a touch drier (and therefore chewier). 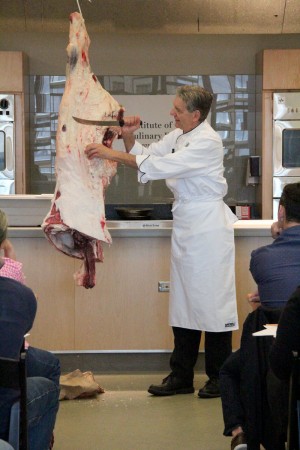 Select cuts, the leanest of all, are rarely eaten whole and often need extensive marinating or tenderizing in order to avoid drying out. We then touched upon an issue which is gaining exposure, grass-fed versus grain-fed meat. Traditionally, American cows have been grain-fed for a variety of reasons. Grain is a cheap and abundant food source that stores well and is thus available year round. Grain fed animals are also fattier animals, providing the deep flavor and juiciness that steakhouses across the country prize. However, as America became more efficient at producing cheap grain-fed meat, we often lost sight of the environmental and nutritional implications of our juicy fatty beef.

Additionally, the use of corn in the alternative fuel market as ethanol has driven up the price dramatically, flipping grain into an expensive luxury.

As an alternative, grass-fed beef has been quickly growing in market share. Consumers see it as an environmentally conscious alternative and many believe the animals’ welfare is improved (cows are ruminants, animals that evolved to eat primarily grass). However, grass-fed beef is much leaner, tougher and lacking in the precious marbling which beef has come to be judged by. It’s a very complicated issue with a variety of innovative solutions. A recent compromise is grass-fed, grain-finished beef which aims for the best of both worlds by providing more fat and marbling without subjecting cattle to spending their whole lives in a feedlot. Ultimately, the market will dictate what people are willing to compromise on by simply watching what they are willing to pay for.

Three hours later and our half steer was broken into dozens of steaks, tons of roasts and a lot of scrap meat for grinding. Watching the hard physical work required, the immense amount of butchering knowledge and the huge amount of waste produced, it is no shock how few people still butcher whole animals. We are so grateful to be able to connect a skilled artisan like Rudi Weid with our students and alumni to keep this craft alive.

If you regrettably missed this wonderful demonstration, be sure to catch Rudi when he returns to ICE on November 5th to demonstrate how to make your own Turkducken for Thanksgiving!