What It's Really Like to Work in a Professional Kitchen

When I was a full-time chef, there were brief moments of the day in which a profound sense of inner happiness would sweep over me. It's often these fleeting, seemingly random instants that are most meaningful; they remind those of us in the culinary world why we do what we do. 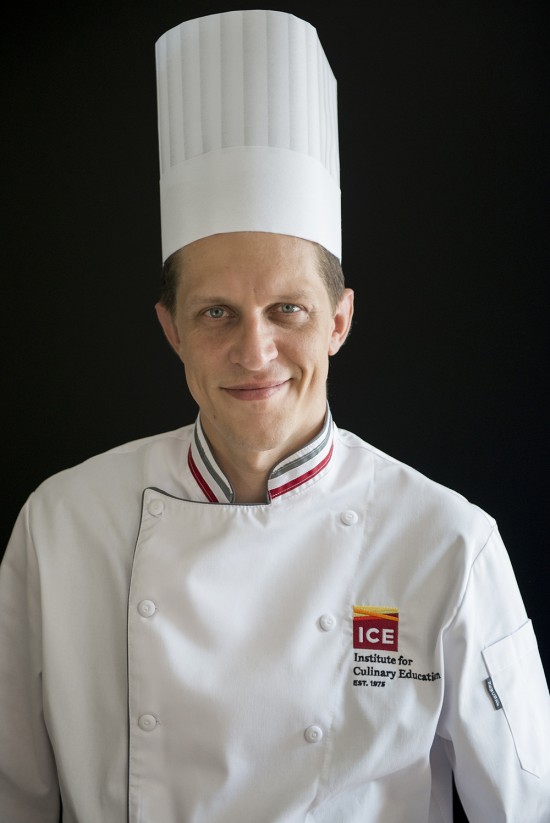 As a restaurant chef, one of my favorite moments was watching the arrival of the kitchen staff in the morning before their shift. These cooks look like they rolled right out of bed and onto the train (because, well, that's what you do).

The early arrivers are those who treasure those few minutes of silence, the only time you actually notice the hum of the lowboy coolers or the whine of the exhaust hoods as they're turned on. They like to have the first pick of their mise en place—everything they need for the day—grabbed in one efficient pass and crammed into a hotel pan to take back to their station.

Their timeliness earns them the right to flat sheet pans, a fresh stack of towels, that favorite whisk or ladle. While I only got to witness this daily ritual once or twice a month (when I happened to find myself at work by 6:00 am), I always got quite a kick out of being first in the kitchen to watch it unfold.

Unlike those who make it to work just in time, whose days begin—and often continue perpetually—under the gun and "in the weeds", the early cooks appreciate ritual. They make that first pot of kitchen coffee. They take a few precious minutes to sharpen their knives. And they seem to know more—for example, the number of covers for lunch, the fact that the produce company shorted the restaurant a case of oranges (again!) or that so-and-so called in sick.

You might say that these are the most responsible cooks, the most paranoid or merely the ones that know they need extra time to get everything done. But most likely, these are the chefs that just live for the job. Despite the long hours and lack of sleep, these guys know that the kitchen is where they belong. 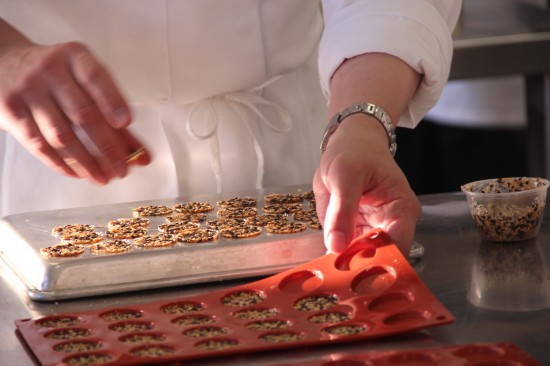 A treasured time for me was always the repose between lunch and dinner, the block of time after prep and set-up are complete, but before the printer starts to chatter, telling us service has started once again. Some days it might last an hour or two, other days it comes and goes in a few fleeting moments. It may start as soon as the last lunch order is out or as late as 6 pm. Typically, I tried to call the time around 4:30 to 5:30 pm my own. This was usually the only substantial break I allowed myself. If it was a marathon shift, it might merely mark the half-way point of the day.

One of the benefits of working in pastry (besides the relative autonomy) is that you're afforded a sense of calm before the storm. The cooks on the "other" side of the kitchen seem to have a much tighter deadline. Their show starts the moment the front door opens at 5:15. We pastry chefs, on the other hand, put in most of the work prior to the dinner hour.

As such, we are left with a few precious moments (once the first diners of the night are seated) to sit back, relax and refocus before service begins in earnest. This brief pause is our chance to perform the culinary equivalent of tuning up, like the din from the orchestra pit just before the abrupt silence that signals the first note of a concert. 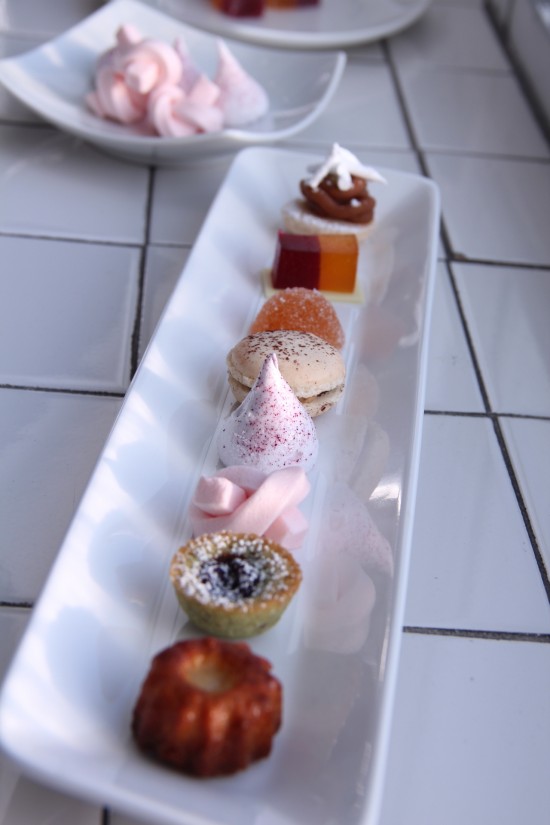 This momentary respite allows us to offer to the very first dessert plate—and all those that follow—our fullest attention. It was during this lull that I could check my e-mail, return calls, or even do a bit of research and recipe testing. I'd start to assemble my orders for the next day or review schedules and prep lists.

Staff meal was squeezed in at some point, and although the rest of the kitchen management retired to the dining room to sit and eat in a more civilized manner, I usually hung out with my own team, often standing, eating and working simultaneously.

If it was really busy, I sometimes passed on eating altogether, opting to cook dinner for myself when I got home that night around midnight. Though there was always something to be done—whether in the office or the kitchen—it was nice to sometimes escape the building altogether, to enjoy a few moments of daylight if the weather was good.

When the midtown Manhattan streets were swelling with 9-to-5ers and early bird theater-goers, I was just catching my second wind. But I was never envious of these passersby, their workdays finished.

Instead, I knew that dusk—the "magic hour"—signaled something very different for me. For them, it marked the end of their daily routine; for me, it signaled the beginning. The end of the night in a pastry kitchen is always a bit unpredictable. Sometimes, service finishes abruptly. Other nights, it's a slow crawl while waiting for a few lingering tables.

Toward the end of my restaurant days, I no longer stayed until the very end, but I never got used to it. I had been the last in the kitchen for so many years—plating and sending out the very last order—that it always felt strange to leave before the entire station was cleared and scrubbed clean.

Leaving early had its perks though. More often then not, it had been a busy day at the restaurant, leaving me little time to eat (save for a couple pieces of bread and some small tastes of the daily dessert's mise en place). So by this point in the evening, I was hungry, generally for something salty and filling.

As soon as I hit 6th Avenue and 52nd Street, the smell of the heady spices from a halal cart would wash over me. But I wouldn't stop. To me, dinner has always been sacred, regardless of the lateness of the hour. So, almost every night after leaving the restaurant, I quelled my hunger long enough to return home and cook myself a proper dinner. 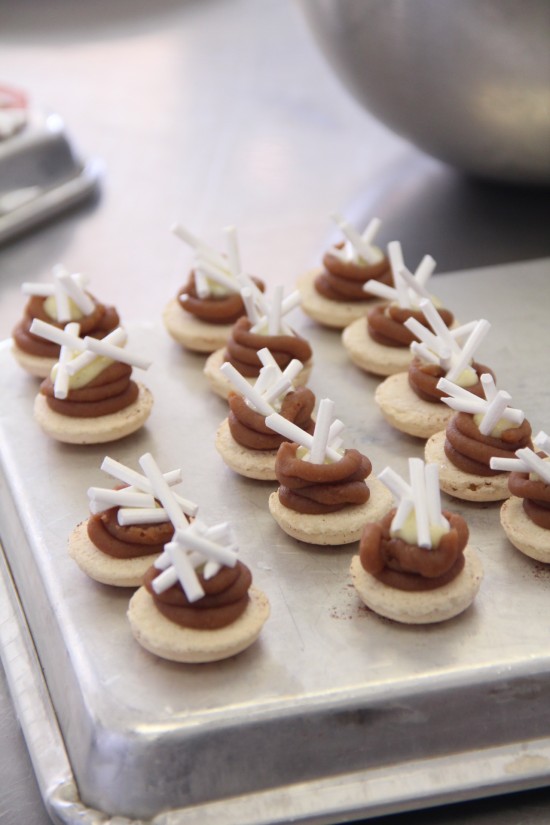 I was also faced with the nightly decision: walk home, take the subway, or hail a cab? My mood generally dictated my choice. If something about the night’s events was slightly off, I would take the long quiet walk to cool off and collect my thoughts. If I felt totally exhausted, I would hop into a cab and be home in five or ten minutes, albeit ten bucks lighter.

If I was neither hyped nor exhausted (and felt able to handle the inevitable wait for the train), I’d walk down 51st Street to the 6 train. Its a poorly kept secret in New York City that Midtown Manhattan is actually loudest at night. This is the time when garbage trucks roar down the crosstown streets and work crews dig up the avenues, ripping out or extending sections of New York City’s circulatory system.

Despite the noise, I always felt a certain sense of solidarity with my fellow train passengers at this hour. More often than not, I would spy the "hat head" of another cook amongst the crowd. Such moments reminded me that this hour wasn't mine alone—I shared it with thousands of other chefs making the trek home after a long day in the kitchen.

A kind of deep, unspoken social bond exists within a restaurant that often carries over into the outside world. There’s a shared colloquial language that would mystify those who don't spend their days in the kitchen. That, coupled with the unconventional hours, creates a kind of subculture, one that identifies with going to bed in the wee hours of the morning and rising around noon, a group that hears the word "weekend" and thinks of a solitary Sunday or Monday.

As a result, those in the industry tend to socialize with other chefs. If you were to introduce two cooks who’ve never met, chances are they would have something to talk about in thirty seconds. It is during these conversations that instantaneous legends spring from events that happened a mere three or four hours prior: tales of heroism or defeat on the line, the culinary prowess of chef so-and-so, the ingredient or piece of equipment that rescued a dish in distress.

While all of these moments in a chef's day are precious—from those first few minutes in the kitchen to that last hour swapping stories with coworkers at the end of the night—the best moment comes when your head hits the pillow. When you close your eyes, pull the covers over you, and smile, delighting in the fact that it starts all over again tomorrow. That's when you know you're really a chef.

To learn how you can launch a creative, fulfilling career in food, click here.

Beat The Chef: ICE Student and Chef-Instructor Battle in the Kitchen