What Is Irish Soda Bread?

Like many non-Irish descendants, when I think of St. Patrick’s Day, it’s all about four leaf clovers, corned beef, cabbage, whiskey and Irish soda bread. But what exactly is soda bread? Some say it resembles more of a scone than bread since it doesn’t contain any yeast. You can find hundreds of different recipes—some include caraway, and others even add eggs. If you ask true Irish lads or lasses, they’ll tell you soda bread must have only four ingredients: flour, salt, baking soda and buttermilk. To them, anything more is a tea cake.

As a chef, it’s always interesting to research where a certain recipe originated and how it has been adapted throughout the years. After doing some investigating, I found that the oldest reference to a published soda bread recipe was found in an Irish newspaper in 1836*.

Now, while I’m all for authenticity, as a pastry chef it’s my job to constantly question tradition and seek ways to transform the simple into something extraordinary. Over years of experimenting, I’ve found what I believe is the perfect balance of flavor and texture—with a little added surprise at the end. I’m willing to bet that once you’ve tasted this Irish soda bread, you’ll never buy a loaf from the bakery again! 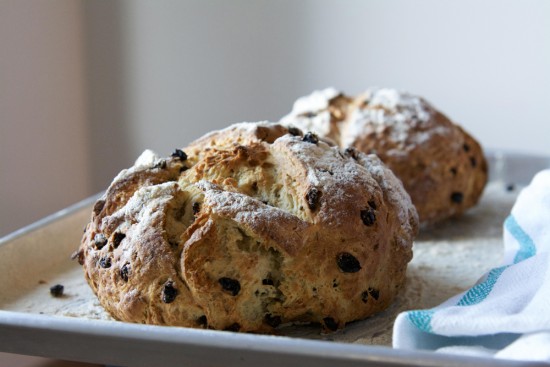 *From November 1836 Farmer’s Magazine (London) VOL 5 p.328 referencing an Irish newspaper in County Down: "A correspondent of the Newry Telegraph gives the following receipt for making "soda bread," stating that "there is no bread to be had equal to it for invigorating the body, promoting digestion, strengthening the stomach, and improving the state of the bowels." He says, "put a pound and a half of good wheaten meal into a large bowl, mix with it two teaspoonfuls of finely-powdered salt, then take a large teaspoonful of super-carbonate of soda, dissolve it in half a teacupful of cold water, and add it to the meal; rub up all intimately together, then pour into the bowl as much very sour buttermilk as will make the whole into soft dough (it should be as soft as could possibly be handled, and the softer the better,) form it into a cake of about an inch thickness, and put it into a flat Dutch oven or frying-pan, with some metallic cover, such as an oven-lid or griddle, apply a moderate heat underneath for twenty minutes, then lay some clear live coals upon the lid, and keep it so for half an hour longer (the under heat being allowed to fall off gradually for the last fifteen minutes,) taking off the cover occasionally to see that it does not burn." This, he concludes, when somewhat cooled and moderately buttered, is as wholesome food as ever entered man's stomach. Wm. Clacker, Esq., of Gosford, has ordered a sample of the bread to be prepared, and a quantity of the meal to be kept for sale at the Markethill Temperance Soup and Coffee Rooms.”