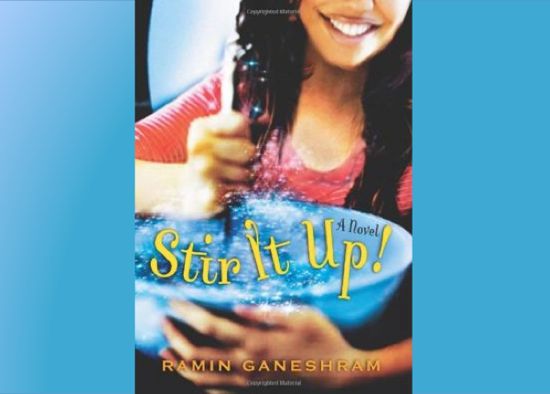 Ramin Ganeshram was once a journalist, but after graduating from ICE she became a food writer and cookbook author. She recently released "Stir It Up!," a novel for teens about a young girl, Anjali Krishnan, who is passionate about food and becoming a chef. In fact, the character even attends kids cooking classes at ICE!

Ganeshram also wrote "Sweet Hands: Island Cooking from Trinidad & Tobago" and has contributed to Saveur, Bon Appetit and Newsday, among other publications. We were curious to hear more about her decision to change careers and how ICE has helped her build a successful career as a food writer.

To me, my career path seems very linear, but when I look back on it, it’s more like a meandering path! I was a news reporter who always loved food and writing about it — back when it wasn’t the cool thing to do. Eventually, I turned the hobby side of my writing into a full-time gig. Part of making that successful was getting more cred — by becoming a trained chef. That’s where ICE has come in of course.

Who inspired you to write Stir It Up!?

Actually, it was the lady who eventually became my editor at Scholastic, Andrea Pinkney, who pitched me the idea of writing a book for them. Her love of my work around Caribbean culture prompted the request and, of course, for my part, the book had to be about food. When I thought about foodie kids, the first thing that came to mind were the kids I’d seen taking recreational cooking classes at ICE from great chefs like Scott Alves Barton and Richard Ruben and suddenly I had a heroine I could flesh out and make real.

Where do your recipes come from?

A variety of places. Ethnic or cultural recipes appeal to me most, and I’m always haranguing everyday folks for their home cooking recipes. Of course, I am inspired by other chefs and food writers. A lot of things come out of my own head — and those are ingredient driven.

What are some of your favorite ingredients?

COCONUT. If I could live on coconut, I would. And salt. Without salt you got nothing. Onions, for me, 99% of all meals start with them. Saffron, the subtlety of flavor and wide intensity of hue is so compellingly elegant.

What have been some of the unexpected challenges in your career?

At first, there were challenges from those who saw me as a “serious” journalist and food writing was not “serious.” That changed pretty quickly thanks to how foodie our culture has become. A major challenge has often been around subject. Because I’m a food culture writer, and often seen as an “ethnic” food writer, people are surprised to learn how immersed I am in the scope and evolution of American food — including a long stint working on food writing great Molly O’Neill’s One Big Table.

First thing's first, I get up and get my five-year-old daughter ready for school or camp, which of course includes homemade lunch and snacks. Then I settle down with a cup of coffee and check email, Facebook and Twitter and then set to working. I’m not a single-track writer, meaning I usually don’t work on one thing only at a time. I usually have several projects going and I spend a few hours on each. I am blessed with a lot of good friends, both in and out of the industry, so I love social media as a way to keep in touch during the day. By day’s end it’s all about my daughter again, and making family dinner and getting her to bed. I usually start working again after she is in bed at 8:30.

Do you have a story about a particularly great day? Bad day?

A particularly great day for me was getting my advanced copies of "Stir it Up!" and handing one to my daughter with the page open to the dedication. The sheer ear to ear grin of joy seeing that I wrote the book “for her” was easily one of the true highlight moments of my career.

Hearing the food stories of real people. Food is often a foil for the real hopes, dreams, loves, and emotions for folks and I feel blessed that I have an opportunity to engage people in a way that is meaningful for them.

Too many ideas and not enough time! Seriously, I feel like I’m always getting ahead of myself and it’s been a challenge to slow down and realize I can get everything done if I work at a sustainable pace.

Yes! Several producers have had an eye on Stir It Up! and I like one in particular who would like to turn it into a TV movie. Of course, I am working on several other projects, two of which are also about foodie kids.

I’d say what I say to my food writing students: the skill is writing and you have to get that down first. Next, you have to know about food to write about food — just like you have to have more than a passing acquaintance with any subject you presume to write about. I think this is different from how journalism and writing has been in the past: back in the day, we could just largely report what was going on. Now, it’s about service more and more. So to serve you really have to know about what your whipping up.

How did ICE help prepare you for a career in writing?

I was already a journalist and food writer when I came to ICE, but being trained as a chef really gave me that edge regarding knowing about what I write. It also gave me entry to the inside world of the people behind the burner — which is far different than viewing and writing about the final product.

To purchase one of  Ganeshram's books, check out the ICE book store.