Max Shrem is currently working on Ph.D. in French literature, focusing on food in literature in the 18th century, but he also moonlights as a cheese expert, writing for cheese-focused magazine, Cultureand blogging for Slashfood. He also works as a cheese monger in Paris for a few weeks each year. We asked Max about how he got into dairy and developed his knowledge for fine cheese. 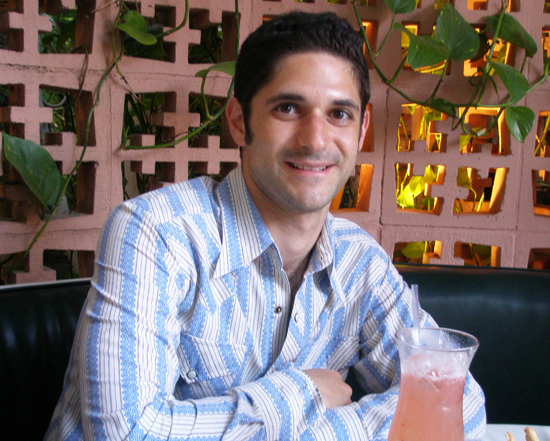 How would you describe your position?

In my academic life I’m looking at literary depictions of milk, dairy and cheese. A lot of it is overlapping with my professional life writing about cheese for Culture. For Slashfood, I’m doing more “how to” posts. For example, how to pick a cheese, how to store cheese, and what cheese is best of Thanksgiving — my focus is informational, service-oriented posts. I’m not really a cheesemonger anymore, but I’ m working seasonally in a cheese shop in Paris. It keeps me physically involved with the cheese.

How did you get into cheese?

I guess I was always passionate about cheese. I grew up in a Kosher household, so when we had meat it was always separate from dairy. It was hard to always keep kosher outside of the house, especially in terms of finding Kosher meat on menus. With cheese, I felt a had more liberty to explore and keep kosher at the same time. If you are really strict, you have to eat Kosher cheese as well, but I wasn’t that strict. I worked at the cheese counter at Whole Foods in Manhasset, NY, and that’s when I became even more interested in cheese and got to be part of the culture around cheese. They had a great selection and it was the first time I had seen so much cheese. That’s when I decided to pursue my personal education in cheese.

One day, a man who is one a large cheese importers came in with his wife and I happened to meet him. We developed a friendship, and that was pivotal in my career. Through him I met Ihsan Gurdal of Formaggio Kitchen and I went on to run Formaggio Essex in New York.

How did you learn about cheese?

I learned by tasting and handling cheese everyday working with it. By taking care of the cheese everyday you come to treat them as though they are your babies. I know that sounds crazy, but it’s true. Each one is fragile and needs to be taken care of in its own way. I learned to distinguish a cheese that was good from one that has gone bad. In some cases it is hard to tell. You have to be extra sensitive to subtleties in taste and texture. In the store in Paris, we age all our own goat cheeses in a cave under the store. Getting involved with the aging helped me learn even more. I still have a lot to learn about cheese making and am getting more involved with producer and seeing what they do.

Well, I just sort of happened into it by chance. What I’d recommend for others is to go talk to cheese makers. Right now, we are in the middle of a cheese revolution. There are so many local cheeses when you go to a farmers market — it’s insane. I would start tasting local cheese makers and learn more by going to work for them. You could also go work in a small cheese store like Brooklyn Larder or Murray’s Cheese. If buy imported cheese, a lot of the time it is made specifically for the American market as an industrial version of artisanal cheeses. You’re better off sticking to some of the amazing local cheeses being made now. For example, I’m really into this washed-rind cheese from Consider Bardwell in Vermont right now.