Many of today’s most notable chefs are writing cookbooks, often with the help of a good food writer. In addition to his work for publications such as The New York Times, Men’s Vogue, Gourmet, Saveur, Bon Appétit and Food & Wine, JJ Goode works with some of these chefs turning their professional dishes into easy-to-read books.

He co-authored "Morimoto: The New Art of Japanese Cooking" (DK, 2007) with renowned chef Masaharu Morimoto. The book was nominated for a James Beard Award and won two IACP Awards. He also co-authored "Serious Barbecue" (Hyperion, 2009) with Adam Perry Lang, which made The New York Times Best Sellers list and was featured on Oprah.

Now, he is working on more books with chefs such as April Bloomfield of The Spotted Pig and The Breslin, Zak Pelaccio of Fatty Crab and Fatty Cue, and Aaron Sanchez of Food Network fame. His book with Roberto Santibanez of Fonda comes out this April. We talked to him about his job, his career path and how he ended up writing books with world-class chefs without ever having gone to culinary school. 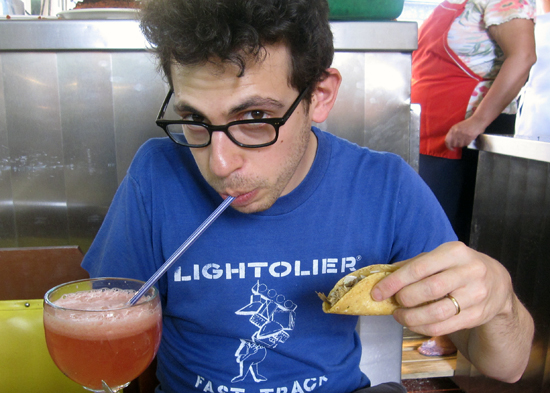 I graduated college in 2003, when the whole food thing really started blowing up. Food magazines and web sites were launching or expanding. Magazines that had never really covered food wanted to start. I got lucky. I decided I wanted to be involved in food during my senior year and begged a generous guy named Steven Shaw to let me intern for a website he founded called eGullet. He then helped me get an internship as a fact checker at Saveur.

I worked briefly as a freelance writer selling articles here and there but I had to take a paralegal job to pay the bills. Then Steven Shaw emailed to say he’d heard about a job opening at Epicurious. I started there and got some great experience. I met more nice people — including a scarily good writer named David Leite and another big-hearted soul named Peter Meehan. The first two cookbooks I worked on were projects Peter sent my way. After a year or two, I had a yearlong cookbook project to work on and I was ready to start freelancing full-time. One cookbook led to the next, and here I am.

I still do some writing about food for magazines and newspapers. But mainly, I help chefs write cookbooks. I work with them to refine their ideas, write the book proposal (which goes out to the publishers who might want to buy the book), figure out the content and shape of the book, and get their ideas on paper. It’s hard enough for me to write clearly about my ideas, and I’ve been practicing for years.

So you can imagine how hard it is for them because they’ve never had to do it before and at the same time they’re trying to run a kitchen (or two or three). I also work hard to channel the chef’s voice when I write. That’s one of the most important parts of a cookbook to me. If you buy a book by a particular chef, you want to feel like he’s with you in your kitchen, you want to get to know him. When people hear that I help chefs with cookbooks, they assume I’m a great cook. I’m not! My job is not to test or develop recipes.

There are people who do that and only that. Some people, like Melissa Clark, are talented writers and testers. I write all of the text in the cookbook that’s not recipes. But I like to carefully edit the recipes, too. For example, I hate recipes that sound like a robot wrote them — “Put cream in bowl. Stir.” I want the recipes to sound like the chef who wrote them. Plus, while I’m an ambitious cook, I’m also a total amateur. At one point, I thought that I should really learn how to cook. But now I’ve embraced my novice status. It allows me to play reader advocate, anticipating the sorts of questions a reader might ask and incorporating the answers into the recipes, so even dumb cooks like me can follow them.

On a typical day I’m hunched over my computer in a coffee shop. But I also occasionally get to go to a chef’s house or restaurant and watch them cook. That’s the best, because it’s fun and because it makes for a better book.

It’s a tie between eating the tasty things they cook and meeting and getting to know the chefs. It’s inspiring to be around people who have dedicated their lives to one thing. The chefs I’ve worked with are so generous. All they want to do is feed you, to tell you about what they love. Their enthusiasm is infectious.

This might sound a little corny, but you have to open yourself up to the possibility. There’s a difference between wanting something and being ready to go get it. You have to get out there and meet people. That’s the only reason I’ve had success — nice people passed projects my way. One day, I hope I can do the same for them. And now, I try to do the same for other friends. Once you start telling everyone you know that you want to, say, work with chefs on cookbooks or test recipes, someone will eventually say, “Oh, my friend is such and such chef or editor or writer. Maybe you should talk to her.” Oh, and don’t expect it to happen overnight. When someone finally does give you a chance, be openly enthusiastic and grateful. And do a really good job.

For more info about JJ, check out his website.