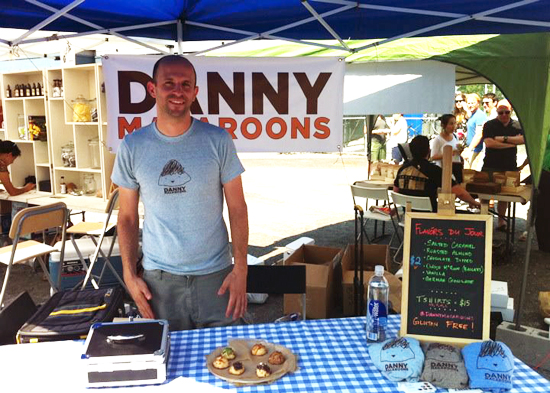 Specialty food products are a $60 billion industry and one that remains attractive to entrepreneurs both large and small. Many people have a recipe or product they’d like to produce and sell. Dan Cohen took his macaroon recipe and created Danny Macaroons, where we produce and sells a variety of coconut macaroons (not the Parisian ones!).

His flavors include Red Velvet, Chocolate/Caramel, Roasted Almond, Salted Caramel, and more — all gluten-free and made with premium coconut. You can find the cookies in a variety of coffee shops and markets such as Smorgasburg, Big Gay Ice Cream Store, McNally Jackson Bookstore and Café, and more.

Well, it’s only me at Danny Macaroons. Two months ago I hired a delivery guy and somebody to help me in the kitchen. But I do everything, from the supermundane like accounts payable and receivable to making and creating a product, to shopping and sourcing ingredients and looking for better pricing, to figuring out packaging, and figuring out how to market something that is traditionally not very well liked. There is a lot that goes in to it.

In December of 2009, I shut down a sports media startup that I had been running for the last three years. Then from December to April of that year, I was doing consulting jobs. I was doing a lot of sitting in coffee shops and working there. I was doing all this coffee shop hopping and getting frustrated with the size of pastries. I like espresso, and a giant croissant or muffin is just too much to enjoy with a smaller beverage. At the same time, I had been making macaroons for years. I grew up in a Jewish family and made them for Passover for something like 10 or 12 years.

That year my uncle’s mother-in-law told me they were great and that I needed to sell them. I said thank you for the idea, but I’m not interested whatsoever. I don’t even really like baking. But then two weeks later, I was in a coffee shop that didn’t have any food. I was talking to the owners and they said they had just opened and they would be demoing pastries in a few weeks. I just decided to do it and brought them macaroons. I told them, “You know I like what you guys are doing and I wanted to bring you these as a gift and hopefully, you like them too.” They asked me if I was selling them, and I said, “If you’re buying, sure.” So I just went for it and before I knew it I had three accounts. It’s not something I ever thought I’d get into.

I look at the dessert world in general and pay attention to what people seem to like. As I get more and more interested in introducing fun and new flavors, I’m kind of annoyed that French macarons get to have all this fun and coconut macroons are with plain or chocolate dipped. Sometimes look at the French macarons and see if they have any flavors that I can translate. I’ve looked through the Vosges catalog to see what they are doing with chocolate and read through the list of Robicelli's cupcakes for ideas. My personal favorite is the salted caramel or hazelnut banana.

What were some unexpected challenges?

Everything. All the challenges were unexpected. Now that we’re up and running, I struggle with the issue of producing vs. selling. The more you sell, the more you have to produce and eventually, you max out your time producing and you have no time to sell. So you can only grow so much because you run out of capacity. I saw it coming, but didn’t expect it. I was forced into hiring someone. I was reluctant to do it even though it seems so easy (what’s the big deal? It’s just a delivery guy).

But it’s hard to hire someone to do it like I’d been doing it. What if they bump it on the subway? What if they don’t ask the questions I ask to see how the macs are doing? Eventually, I had to do it. I need time to talk to the packaging people about new ideas or FedEx to see if I can get a better rate on shipping. The requirement of a business that sells something is that you have to produce it, but you also have to dedicate time to selling it and fulfilling orders. I’m still working through that dynamic.

They’re never typical. Mondays are baking day, so on Sunday, I take orders. Then I’m in the kitchen at 8:30am, maybe 9am. We work out of the kitchen of Gracious Time, a great catering company in Spanish Harlem. Tuesdays are for delivery so my delivery guy comes and I might take meetings. Wednesdays are pitch day to develop new business. Or maybe Tuesdays are pitch day and I take meetings on Wednesdays. So I take some macaroons around and see who might be interested in buying some. Thursdays and Friday, I work on packing and shipping. Saturdays and Sundays are our market days. But really it is never the same.

Do you have a story about a particularly great day?

Lots of things happened in the last year and a half to make me feel like this was a good idea to pursue — weird coincidences, or seemingly coincidental things that kept happening. The most bizarre still is that in the first year I would deliver on Tuesdays and Fridays for the whole year. Every single one of those Tuesdays and Fridays had reasonable weather. It was never bad. At worst, it would maybe rain as I got back to my apartment, so I’d get wet on the way back for a little bit.

I mostly did the delivery in the afternoons and if the forecast said it was supposed to rain all day, the rain would be finished by 11 am and I’d go out at noon. Sometimes it was a little misty. In the winter, it snowed on Monday or Thursday so by the time I needed to go out it was all cleared. Even now, our streak of incredible luck continues. There were one or two days in September that were just kind of crummy, but not bad. To this day, the delivery guy will come and say it’s supposed to rain and I’ll say, “I don’t know. It might not. “

What is the most satisfying thing about your job?

I’m trying to take on shelf-stability for grocers. I’d really like to figure that out, so we’re working on it.

Don’t do it. All kidding aside, it’s really a hustle. If one’s not a grinder, a super hard worker, it’s not going to work. That just takes some honest self-assessment.  If it’s not you, it’s just not going to happen on a scale that will allow you to live or live in a way that you would like. You are really working all the time. It’s hard. It’s great to have partners, but partners are complicated. My real advice is to find people willing to pay money for your product before you start. Lots of people have a product that they get positive feedback on (like me) and people tell them they should sell it. So, they think, “Great. I’m going to make a business!” But you want to find out if people actually want to spend money on it before you launch a business.