On the path to becoming one of the nation’s authorities on Pastry & Baking Arts, Chef Michelle Tampakis has taken some fascinating and unexpected turns. Born in the Bronx, Tampakis grew up in the New York City suburb of Teaneck, NJ.  She took and interest in the kitchen at a young age, with family as her inspiration.  Says Tampakis, “My dad would cook a lot while I was growing up, and he always encouraged me to get into cooking.” 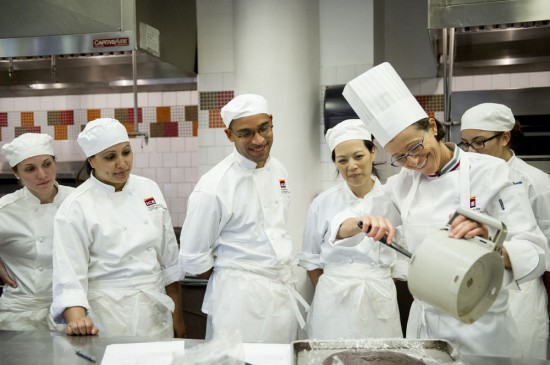 TV and movies would have their influence too.  Tampakis would often watch Julia Child on TV, thinking, “She made everything look so scrumptious, like you could smell it through the TV”. The movie Who Is Killing the Great Chefs of Europe? sealed the deal. “I wanted to be a glamorous pastry chef, just like Jaqueline Bisset!”   After high school, she studied Hotel & Restaurant Management at a nearby community college, but was completely drawn to the kitchen. 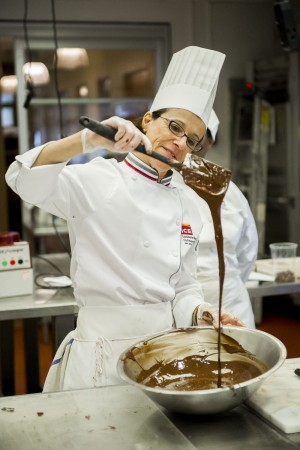 Her first kitchen job was at the Moonraker Restaurant in New Jersey.  “I had no experience, but told the manager that I was smart and fast. And I loved it.” She quickly decided that culinary school was the way to go and attended the Culinary Institute of America from 1980-82, studying culinary arts.

“I volunteered for everything, all of the clubs. I loved being involved.”

Culinary school was an integral experience for Tampakis, who feels that “it’s increasingly becoming a requirement to go to culinary school.  It’s just not as easy for those who don’t go [to school] to be successful”.   As a student, it was her externship at the Vista Hotel that led her to connections that would shape her future. She could work all of the cooking stations, but was pulling closer to pastry every day, leading to her hire as Assistant Pastry Chef at just 22 years old.

Her connections from the Vista led to her next big break as Pastry Sous Chef at the glamorous Windows on the World, where she met Executive Pastry Chef Nick Malgieri. When Malgieri left the restaurant to develop a baking instruction program with culinary educator Peter Kump, Tampakis eagerly filled his vacant role.

She had stayed in touch with Malgieri – a good thing for all of us, as he later offered her a position at Peter Kump’s New York Cooking School as a Pastry & Baking Arts instructor.   While teaching at Peter Kump’s – which became the Institute of Culinary Education in 2001 – Michelle has stayed active in her professional pursuits beyond the classroom, participating as both a competitor and judge in pastry and chocolate competitions throughout the US and Europe.

She is a regular judge for the annual Pastry Live National Showpiece Championship, and a frequent participant in the New York Chocolate Show, creating the most non-conventional showpieces imaginable, including fashion and costume attire. Among her other accolades, including numerous appearances on Food Network and with Martha Stewart, Michelle’s unique talents in crafting chocolate showpieces led her to being named one of Dessert Professional’s Top Ten Pastry Chefs. Her enthusiasm and passion for all things pastry have helped her develop relationships with some of the world’s greatest pastry chefs, who today, she proudly invites to teach at ICE’s Center for Advanced Pastry Studies (CAPS). 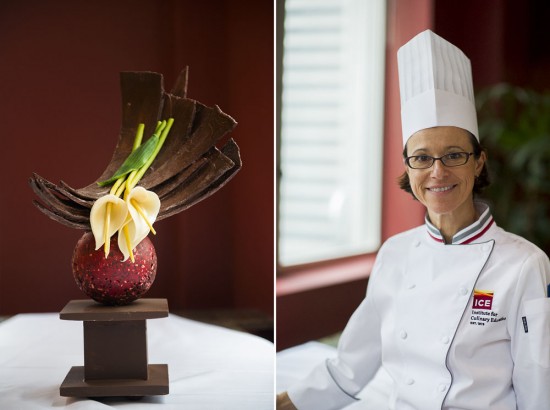 Then, in 2007, Tampakis was diagnosed with Celiac disease. For a pastry chef to have a medical condition which prevents them from exposure to gluten-based products – most notably, wheat flour – is a challenge to say the least.

Fortunately for those with gluten sensitivity, Tampakis overcame this hurdle and has wholly embraced gluten-free baking techniques. Since then, her research has developed many successful recipes, which have become the foundation for Tampakis’ latest venture: a gluten-free bakery. Today, in addition to teaching a full schedule at ICE, Chef Michelle is the founder/owner of Whipped Pastry Boutique, where she proudly employs three ICE grads.