Roasting fluffy white marshmallows over a bonfire for s’mores is a yummy summertime essential, but for ICE alumni Sandra Palmer and Kiyomi Toda-Burke, s’mores are only the beginning. 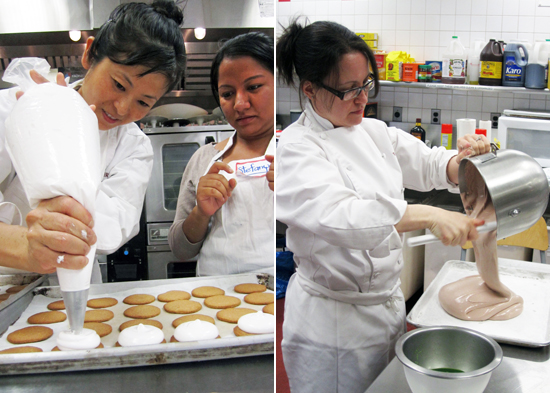 Being that my culinary experience was limited to baking Christmas cookies with my grandma once a year, I was less than optimistic about my ability to whip up picture-perfect confections like those on display at Three Tarts Bakery in their recreational baking class at ICE last week. But under the patient and lighthearted tutelage of Palmer and Toda-Burke I was able to learn some culinary vocabulary, and the essentials of whipping up some yummy treats - all beginning (and ending) with the essential ingredient: marshmallows.

The ICE graduates-turned-pastry chefs of Three Tarts gave insight into the tasty world of desserts and took the marshmallow to an entirely new level as they shared a variety of delicious twists. Who knew the versatility and vast array of flavors that would taste scrumptious as a soft, chewy marshmallow! I was intrigued when Palmer and Toda-Burke kicked off the class with a demo on the chocolate marshmallow and was surprised to learn how delicious marshmallows infused with espresso, strawberry-basil or green tea flavors tasted!

The former Pastry & Baking Arts classmates began taste-testing almost every variety of flavors and ingredients imaginable in an effort to concoct the most delectable marshmallow. “The only thing we haven’t had success with is pure alcohol,” the talented twosome admitted. The class of eight women immediately erupted in laughter, as the ICE graduates quickly transformed the kitchen from a cooking class with strangers, into a fun bake-off with friends. I was especially interested in the idea of double-decker strawberry-basil marshmallows. I love the fresh taste of basil that reminds me of summertime, but I couldn’t imagine how it would taste as a sweet marshmallow. Palmer and Toda-Burke first blanched then pureed the basil to add color and flavor to the mix.

The pastry-chefs added that almost any kind of fruit puree could be used to flavor marshmallows with the exception of pineapple. They also recommended that frozen fruits be pureed to flavor the marshmallows, because frozen fruits are picked and preserved in their most ripe and flavorful form. The strawberry-layer of the marshmallow was made with frozen fruit puree, and lemon-juice was added to enhance its flavor. I learned that adding lemon juice to enhance mellow fruit flavors like strawberry and melon is a quick and easy fix to bland desserts! At the conclusion of the four-hour culinary class, I couldn’t believe how easy it had been to make marshmallows and how versatile they could be as a dessert ingredient! After only a few hours of measuring, mixing, blooming and baking, the stainless steel countertops at ICE were covered in confectioners’ sugar and dozens of picture-perfect treats.

Trays overflowed with chocolate-dipped Mallomars perfectly in a row, mountains of espresso, vanilla, chocolate and strawberry-basil marshmallow cubes stacked up high, s’mores with raspberry marshmallow and mouth-watering graham cracker cookies that had the chocolate baked inside! As skeptical and inexperienced as I was, my first culinary endeavor was a success — the proof was in our chocolate-banana parfaits! My lack of experience was met with the refreshingly jovial and enthusiastic instruction of Palmer and Toda-Burke. The pastry chefs from Three Tarts infused the class with energy and fun, while being patient and eager to help teach each student techniques, tricks and culinary tools necessary to make delicious desserts.