ICE's first official class on sous-vide cooking is just one month away. 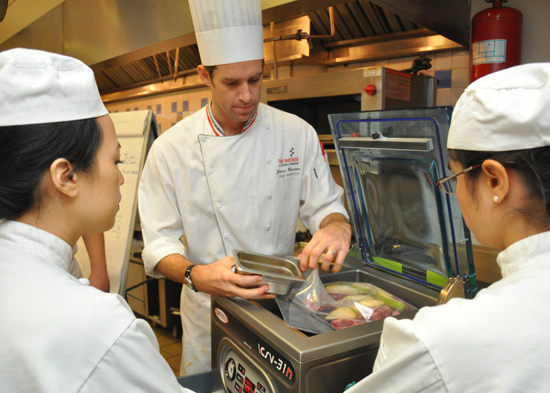 Now that our sous-vide curriculum has a foundation of really solid technique, I've begun to introduce some of the methods to my students whenever we have a few extra moments in class. This week we worked on short ribs. I wanted to take a look at two flavor profiles that are worlds apart — Korean Short Ribs and a Pastrami-Style Rib (those who are frequent readers may remember Pastrami Short Ribs). But I didn't want to just lift someone's recipe, I wanted to put my own spin on it.

When cooking sous-vide, the first thing to decide is the temperature you'll cook at. Time is a huge factor. Cooking times for tough cuts of meats (those that are usually braised) can range anywhere from 12 to 72 hours; depending on the temperature selected. Cooking temperatures can be adjusted to allow for the time allotted. For example, if food needs to be ready in 24 hours or less, it must be cooked at 66˚C or higher.

Of course, the desired texture of the cooked meat plays a large role as well  — temperatures from 54-60˚C will result in meats that are exceptionally tender, but still sliceable; where  66-72˚C will yield a slightly firmier version of the familiar 'falling off the bone-tender' typical of braised meats. For me, one added advantage of the (relatively) higher temperatures is that fat in meat will render where the lower temperatures can sometimes leave too much fat in heavier cuts of meat. All of that said, I settled on 72˚for 24 hours. 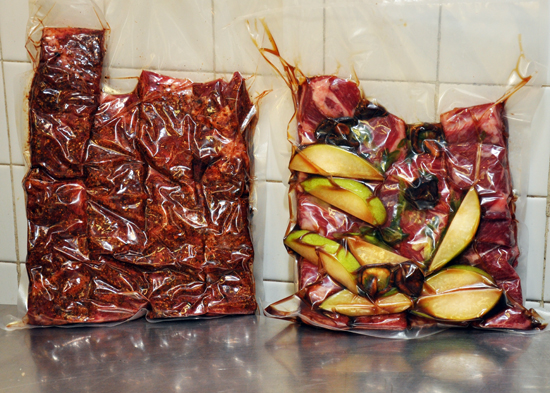 But my focus with the short ribs was flavor. Seasoning can be one of the trickier things to master when cooking sous-vide. The vacuum can intensify spices as they cook and also helps marinades to penetrate meat more quickly. Armed with this knowledge, I created a black pepper, coriander and smoked paprika rub for the pastrami style ribs and soy, sesame, sugar marinade with pears and dried shitake for the Korean ribs before slipping them in to cook for 24 hours at 72˚C.

The pastrami style ribs tasted of nothing but the spices. The flavor of the meat was completely lost, though the texture was excellent. On the next trial, we will tweak the proportion of the spices in the blend and reduce the amount applied to the meat. The Korean style ribs were delicious, but only the edges of the meat that were completely saturated with marinade. The center cuts from the ribs only offered hints of the flavors their name promises. So when the second take comes for these, it will be more marinade and a longer time for the meat to absorb it before cooking.

Exploring sous-vide takes me back to my very first days in the kitchen, as a teenager on Pensacola Beach. The days when I would sit at home and read cookbooks instead of studying English Lit. In my spare time at work, I would try to replicate from memory the things I had read about. Needless to say, there were far more disasters than success  — like the time I made risotto with orzo pasta. The shape looked like what I had seen in a book and it ended in an 'o' just like arborio (at the time any new strange word that ended in 'o' seemed correct), I was sure I was on the path to Italian mastery. These days the errors are minor in comparison. But still, it reminds that there is as much, if not more, to be learned from the misses as there are from the hits. So whether you're exploring new, modern techniques or just learning to saute properly, never be discouraged by mistakes, but learn from them.