We made our way down the hall of an empty schoolhouse, shouts of Italian, then laughter followed by more shouting echoed through the hall. The men on the other side of the wall were either about to rip each other’s throats out or in middle of the funniest story ever told. My Italian is no good so it could have been either. 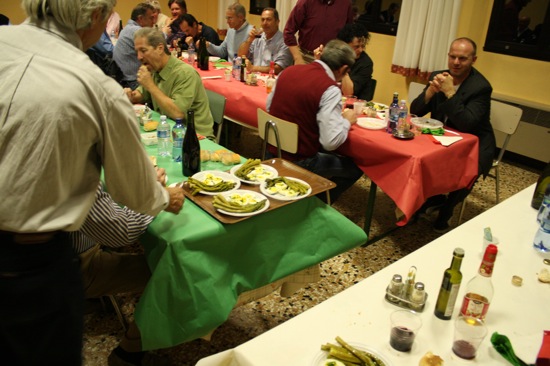 Inside the room were three long tables in the shape of a ‘U’ each table dressed with a different cloth — red, white and green — like the Italian flag. After a brief introduction from our host, “something, something, something ‘Americanos’ something, something” we were greeted with a rousing ‘Ay’ and plastic cups filled with wine hoisted in the air. The average age in the room was 50+ and it turns out all the shouting was over who among them was the worst soccer player.

On our final night in Italy, where we received training in the culinary art of sous vide, we had been invited to be a part of this group’s long-standing tradition. Once a week, they get together after work. If the weather is good they might play a game of soccer, but the evening is really about the meal together. They meet at the same school they all attended as children, prepare the food in the school’s kitchen and set their patriotic tables in the adjacent classroom.

We found a few empty seats and were immediately presented with a plate of coarsely sliced salami. The meat was very soft. Simply seasoned with salt, pepper and garlic. You could taste the flavor of the air in the cool, damp basements they had recently hung in. It was fantastic. Someone poured me a glass of wine from an unmarked bottle and waited while I tasted it. It was deep red and slightly effervescaent — the Piave’s version of a Lambrusco. I smiled and nodded, ‘molto bene’ was my best, inept attempt to tell him it was delicious. He beamed as he explained he makes the wine himself. Asparagus and boiled eggs were the main courses. Plates were filled with tender spears of boiled asparagus and hard-boiled eggs. Each man contributed in one way or another to the meal whether it was the asparagus spears from his backyard, eggs from his chickens or the wine or salami carefully crafted in his basement. Our host brought a basket of eggs so fresh, they still had… well, let’s say ‘natural’ markings.Local olive oil, vinegar, salt, and pepper were the only condiments offered at the table. I watched my table mates for the proper etiquette, which was to mash up the boiled egg with a spoon, add the olive oil, vinegar, salt, and pepper to make a bit of a dressing, then spoon it over the warm spears of asparagus. It was simple, fresh and perfect.

From there the night began to spiral downward. As the last bites of asparagus went down, out came bottle after bottle of grappa. The Italians of the Veneto take their grappa seriously and that’s how we drank it. Once the grappa had everyone loosened up (like we needed it after the wine), out came a guitar. The rest of the night was a hazy slush of Italian folk songs and Bob Dylan, Cat Stevens, U2, Johnny Cash and Bob Seger sung in subpar English — which was a perfect match for my subpar guitar playing.

The recipe below is a little fancier than the meal we enjoyed that night, but if any of my new Italian friends come to New York to visit, I’d be more than happy to serve it to them.

Halloween Treats for Kids to Make