I can still remember my first key lime pie. 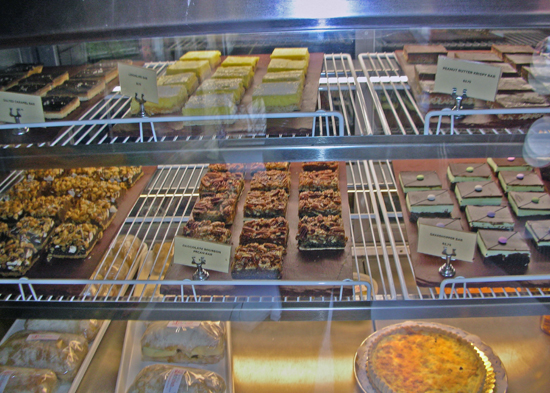 After returning from a several month tour of Korea (in another lifetime I was a classical flutist), a place where I thought it was possible to starve to death, we surfaced in Daytona. My roommates went out on the town and returned with key lime pie. At first I turned my nose up at it. I’m not a lover of all things fruity and sour, so naturally it seemed far too un-chocolately. Luckily, my hunger eventually took over and to my surprise something so fruity could be, well just plain delicious. I was hooked. Now, every year one of the primary goals of our annual pilgrimage south is to eat key lime. Last week when the weather turned to a delightful summery breeze (and 90% humidity, easily duplicating August in Florida) I figured it was time to eat some pie at Steve’s Authentic Key Lime Pies. It is quite a trip — the subway to Brooklyn and then a long and circuitous bus trip around IKEA and back again, and then a short walk out to the water. Actually, a lot of the neighborhood has been beautifully restored and it’s a great view from the pier. The store itself is super-kitschy.

I looked around for the saltwater taffy and fudge-agators and I could have sworn I was in Florida tourist-land. I bought a pie and had it packed in ice to go and a Swingle — a four-inch key lime tart, frozen on a stick and dipped in chocolate. I ate that Swingle the second I walked out the door. It was good, but in this case I realized, I’m a purist and it would have been better without the chocolate. When I got home, hubby and I enjoyed the pie, with some whipped cream for good measure. Its all-natural, fresh key lime juice goodness could give Publix’s junky deliciousness a run for its money (if only Publix would just get rid of those awful soggy almonds on top). I would happily eat it again (but a warning: it didn’t travel well, half of the filling slid out and into the bottom of the packaging). If you need a Florida fix, grab a friend or two (or don’t) and order three and they will deliver in Manhattan and Brooklyn. Or make one yourself.

It’s pretty easy to get bottled key lime juice these days and it’s not bad with regular lime juice either. While we’re talking Red Hook, I must give a quick shout out to one of my favorite bakeries, Baked, just a few blocks away. I stopped in and grabbed a few sweet and salty brownies, a salted caramel bar (more commonly known as a millionaires’ shortbread) and the most delicious thing ever, a grasshopper bar. Grasshopper pie, a throwback from the ‘70s, is a green, minty concoction, sans grasshoppers. What I like most about Baked’s version was that it was not overly minty, a thin brownie base with a big layer of lightly minty creaminess and a thin layer of chocolate ganache on top. I wished I had bought two. I also really like both of their books — New Frontiers in Baking and Explorations. So next time you have a hankering for some Swedish meatballs and some mass-produced, inexpensive furniture, make sure to stop at Steve’s and Baked for a sweet treat. Or if you're feeling adventurous, learn to bake this celebrated Floridian confection yourself and impress friends and family with your culinary prowess.

How to Make Challah Bread