Each of ICE’s Chef Instructors is a treasure trove of knowledge. Chef Instructor Nicole Kaplan is an ICE alum who worked in the kitchens at Eleven Madison Park and Del Posto before joining the team at ICE. Working in these award-winning restaurants, she earned praise for the desserts and dishes she designed and created for the menu. She brings that expertise to her classroom to share with her students, but now she will also be sharing it here on DICED in a recurring feature, “Sweet Treats.” She’ll sample pastries and desserts from around NYC and report back here. In the first installment, she tells us about canelés and how to find authentic versions.

A few years back, when I was working at Eleven Madison Park, I found myself fascinated with the canelé de Bordeaux (a.k.a. cannelé bordelais), a wonderfully unique cake with a rich custardy interior enclosed by a thin caramelized shell. Canelés (pronounced can-el-eh) originated in Bordeaux about 300 years ago. They’re made by pouring a crepe like batter into a copper mold that has been lined with beeswax and are then baked until they are almost blackened in color.

At the restaurant, we ordered molds from Dehillerin in Paris and brought in beeswax from our local beekeeper and away we went. Well, my team and I lost a few years of our lives, but we managed to figure it out and after two weeks of blood, sweat and a whole bunch of tears (mostly mine) we came up with the most beautiful cakes imaginable. Surprisingly, none of them quit. We were all proud as we handed them out to our departing guests every night. 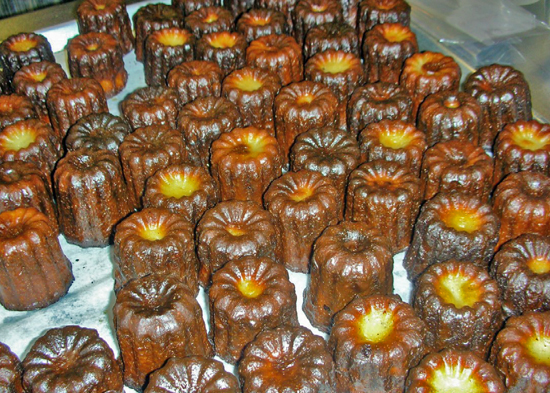 Unfortunately, they wound up being a bit misunderstood and were eventually shelved to make way for brioche with candied orange and sour cherries, but they will always be one of my favorite projects. Happily you can now get some wonderful little canelés of your own from Les Caneles de Celine, French Miniature Pastries by Celine Legros. I picked some up at the Columbus Circle Holiday Market where they have had a stand, but you can pre-order them to pick up or have them delivered to you. I got an assortment of canelé including vanilla, orange and grapefruit and some financier, another classic French cake, baked in the shape of a gold bar.

The canelé were almost everything that I was hoping them to be. They had the delicate glow of beeswax on the outside and the soft delicious, custardy goodness inside. If anything, I prefer my canelé baked a bit longer so they are a coppery golden hue all over, but color on canelés seems to range from pale golden to blistery brown. On a curious note, the ones that emerge pale on their tops have a special name that delightfully translates in English to “white asses.” For those who are curious, the financier were also delicious and rich and came in traditional, almond, chocolate chip, praline and raspberry.

I have sampled a handful of canelé attempts here in NYC over the years and have been disappointed up until now. These are the real deal and worth the indulgence so run out and get some. Or if you are daring, try this recipe…