This week, my module one Pastry & Baking Arts class went on a field trip. 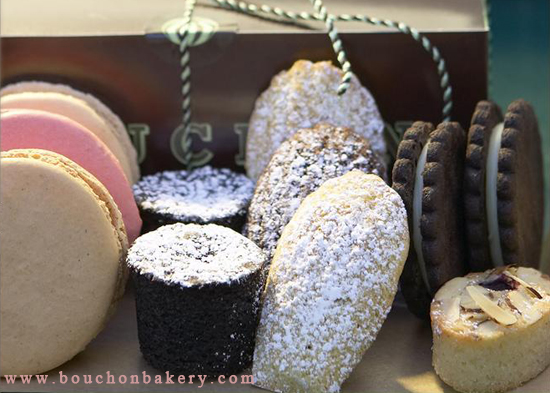 I tried to give them a broad view of the many different kinds of venues there are and advice on how tasting a variety of treats can help them develop their own palates and ideas; however I think I might have also given them all stomachaches.

We started off in the neighborhood around school with a quick trip over to Eataly to check out the incredibly vast selection of panettone and pandoros, as well as all of the other yummy treats. If you are a pannetone freak like me then you need to head on over this holiday season and get some. There was something for everyone including what is the Italian version of a Boston cream doughnut but supersized. Next, we walked down the street to Maison du Macaron, where we deemed the macaron to be just okay, however the ones painted with bats and Halloween decorations got big points in the super cute department.

A few steps down, we arrived at the new outlet of the Doughnut Plant. To be clear, these aren’t your ordinary Dunkin Donuts. There is just no comparison. I have my favorites — the coconut cream, the devil’s food, and the crème brûlée— but the banana cream one looked so delicious that it left me crying inside due to my banana allergy. We also got the cinnamon sugar, matcha, pumpkin-glazed, triple chocolate and more. This place is worth a trip; the doughnuts are really special. I’m glad it’s a block in the wrong direction from my commute so I don’t wind up passing it every day on the way to work. By this point my class’s stomachs were starting to wonder what was going on, so we took a break, jumped on the subway and headed up to Midtown.

We stretched our legs with a walk over to Amy’s Bread, which if you ask me is the only place in NYC to get a really good, worth-eating, red velvet cupcake (sometimes a girl has her cravings). Next, we huffed it over to Sullivan Street Bakery for some Pizza Bianca. Sullivan Street is, as always, making some really good bread. My favorite was the cauliflower when it was warm right out of the oven. It was a nice change of pace from all the sugar. At Je & Jo, a surprise of a tiny little ice cream shop, we grabbed a pint of cardamom-snickerdoodle ice cream and about 40 little wooden spoons and took an ice cream break. Everything is organic and each ice cream seems to be paired with a cookie inside. I was curious to see that they ran all the ice cream in a soft serve machine rather than a batch freezer and then they froze it into hard ice cream. The jury is still out on whether that is innovative or slightly weird.

By this point, the pastry class was starting to groan a little under the weight of all the force-feeding but nonetheless, we persevered. You can’t be a good chef unless you have tried all the competition and figured out what’s good and what can be improved. So we made our way east to Rockefeller Center where we took a quick stop at Magnolia Bakery and then on to one of my faves, La Maison du Chocolat for a few bites of some of the most beautiful bonbons around and a second round of macarons. We popped downstairs to Jacques Torres for an interesting comparison in both flavors and pricing. I think this might have been the class’s favorite stop. I gave my vote to the chocolate-dipped marshmallow Peeps on a stick.

Our last stop was the new branch of Bouchon Bakery for some of the best macarons around, as well as some other delicious and beautiful morsels. It was a tasty afternoon but all I could keep thinking as I walked home was, I should have gotten some doughnuts for later.