Like most people, I have a deep love for fried chicken. The perfect fried chicken is a wonderful mix of crisp skin and tender meat that, when done right, is incredibly delicious. 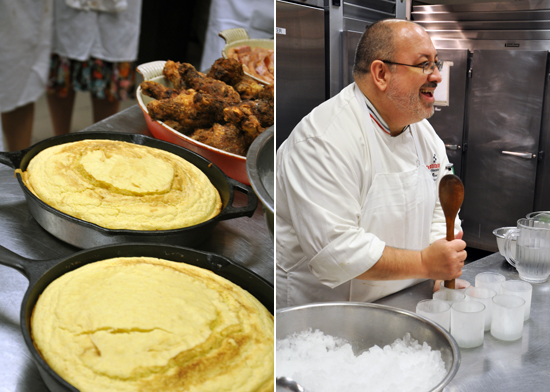 So I was excited to take part in Chef Instructor Dan Stone’s The South: American Regional Favorites, one of ICE’s recreational cooking classes, last week. The course description said it perfectly; “The South is quite possibly the most delicious region in the country. It's hard not to love its fried...well, its fried everything, its braised vegetables, and its mile-high pies and cakes.” The other students and I eagerly prepared Southern favorites, including Deviled Eggs, Southern Fried Chicken, Ham Steak with Red-Eye Gravy, Slow-Roasted Barbecue Ribs, Biscuits with Cream Gravy, Fried Green Tomatoes, Cornbread, Braised Collard Greens, Coca-Cola Cake (a treat I had never had before, but will be certain to make again) and Fried Fruit Pies. Oh, plus Mint Juleps and Sweet Tea to complete the meal. During the course of the class, we picked up lots of tips and facts about food below the Mason-Dixon line. Here are a few to keep in mind:

You Say Tomato…: If you can’t find green tomatoes for the classic fried green tomatoes, substitute tomatillos. Tomatillos are not really tomatoes at all, but are in fact related to gooseberries. But their acidity makes them a wonderful treat when breaded and fried.

To Scoop, Or Not to Scoop: One cup of flour should weigh exactly four and a quarter ounces, but with so many different measuring techniques it is rare that a cup weighs that. The proper technique is to scoop flour into a dry measuring cup with a spoon and then level with a flat edge.

Mix it Up: Southern cuisine is a unique blend of European, Native American and African cuisines. The history of the region has brought in so many diverse influences that the cuisine is an incredible blend. It was the Native Americans that first introduced the slow cooking that became barbecue and the Spanish that introduced the pig that became so ubiquitous in the cuisine of the region.

The Perfect Egg: The secret to a perfectly tender hard-cooked egg is to not boil the eggs at a high temperature. Instead, bring the eggs and water just to a boil and then turn off the heat. Cover and let stand for 15 minutes. Then, immediately transfer to ice water. Works every time! All in all, it was a wonderful evening and a very filling one too. And that fried chicken… well, it was finger-licking good. For more American cuisine classes, check out ICE’s recreational cooking classes.