The executive chef is dedicated to helping people with her cooking at Cadence.

Growing up in Richmond, Virginia, Shenarri “Greens” Freeman (Health-Supportive, ‘20) showed an interest in wellness from an early age, but it wasn’t until her hospitality industry lifestyle began to feel unhealthy that veganism changed the course of her life.

While studying physical therapy at Howard University in the early 2010s, Shenarri interned and worked at multiple live music venues and restaurants around the D.C. area. She spent four years bartending, hosting, cooking and serving at spots like the popular concert hall 9:30 Club. 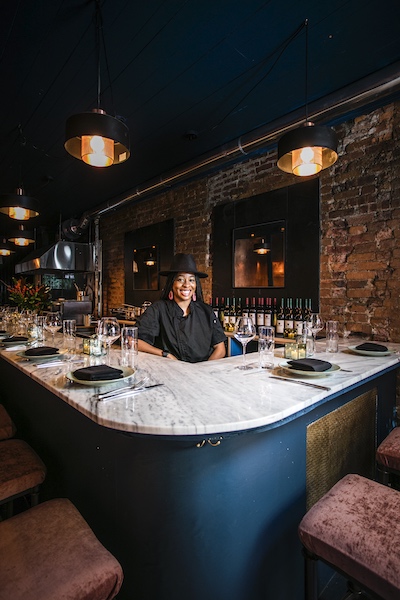 When she made the decision to halt her college classes due to a family illness, Shenarri took on a full-time managerial role at Marvin, a bustling bistro in the U Street Corridor. It was during her three-year tenure there that she adopted a plant-based diet.

“There was a huge party environment and I drank so much alcohol,” Shenarri relays. “One day, I woke up and I had gained an extra 60 pounds. I wanted a full-body detox, so I decided to do a 30-day vegan cleanse without alcohol, and I felt great.”

A month of clean eating snowballed into a permanent vegan diet that had more benefits than just Shenarri’s improved physical health. “It inspired me as a chef, as well, because I got tired of eating tofu and peanut butter sandwiches,” she explains. “That’s how the creativity with my food came along.”

Shenarri began to showcase her innovative plant-based cooking with pop-ups and dinner parties. When she received positive feedback about the events, she started to consider culinary school. “I wanted to take it to the next level and actually understand food a bit more and learn the craft and proper technique,” she says.

Unfortunately, it was a personal tragedy that ultimately compelled Shenarri to enroll. “The final push for me to leave D.C. and move to a different city was actually that my partner at the time had passed away,” she details. “He was helping me apply to schools and once he passed away, I knew it was something that I had to do.”

Finding the right program, however, was a challenge. Shenarri was looking for a vegan culinary education with which she wouldn’t have to cook meat, but such an offering was difficult to find — and then ICE launched its Health-Supportive Culinary Arts program during her search. “It’s 85-90% plant-based, so it was just kind of meant to be,” she says. “I immediately signed up. I was sold. It was insane timing.”

Shenarri earned a scholarship and started at ICE in 2019. She loved the classes and the instructors immediately. “Every day was really exciting for me because I got to learn something new,” she recollects, adding that she picked up invaluable knife skills, networking confidence and kitchen operations know-how. ICE also provided Shenarri with the chance to volunteer at the James Beard House, where she met chefs from all over the world while assisting with the venue’s famous dinners. “I wouldn’t know as many people in the food industry in New York as I know now,” she admits. “I’ve only been here a year and a half and my network has really expanded in a small amount of time.”

Since Shenarri chose a hybrid program, she was able to work during culinary school. She served as head chef at Greedi Vegan in Brooklyn and had a short stint as a line cook at P.S. Kitchen in Times Square before the pandemic turned the tourist-ridden neighborhood into a ghost town. For the first few months of quarantine, while ICE classes were on hold, Shenarri took time to introspect, rebrand, build a website and upgrade her Instagram presence.

In the summer, she happened upon a job with plant-based restaurant group Overthrow Hospitality. “It kind of happened by accident,” Shenarri reveals. “A friend and I were eating at Ladybird and we found out the company was hiring. I had a response within minutes of applying. The position I wanted as a chef wasn’t available, so I came into the company as a manager for Avant Garden.”

As Shenarri was completing her externship hours with the group, her boss approached her with the incredible opportunity to be executive chef at a new vegan Southern and soul food restaurant in Alphabet City. She was thrilled with the offer and began developing the concept soon thereafter.

In February, Cadence had its soft opening with a menu that was very personal to Shenarri, followed by an official opening on March 31. “Most of the items were inspired by dishes I grew up eating in Virginia or things I learned along the way,” she says. “Of course, I veganized everything and added my culinary background, as well.” 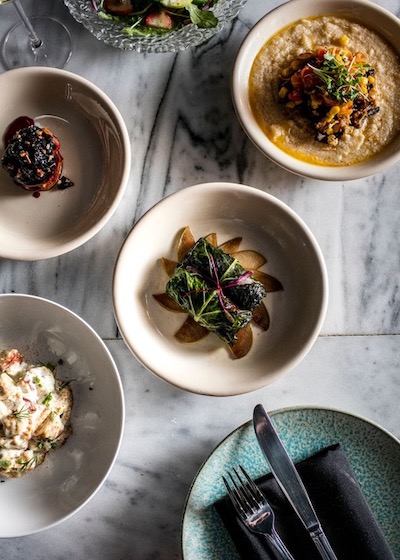 The collection of flavorful, textured plates included Southern fried lasagna with red wine bolognese and pine nut ricotta, a spin on buttermilk cornbread, and jerk mac and cheese that represents Shenarri’s experience at cookouts. Grits made an appearance as well. “Everyone loves grits,” Shenarri insists. “Breakfast, lunch, brunch, dinner — I couldn’t do this menu without them. I love grits so much.”

Similar dishes, along with beverages from Black-owned brands, are part of the beverage program. “We want to highlight Black-owned wines and vendors,” Shenarri says. “I work for an amazing company. There is so much support. There is no idea that gets left behind or that’s too much. It doesn’t feel like work, it feels like a family and I really love that.”

Though Cadence is her primary focus, Shenarri has plenty of aspirations for the future. One day, she wants to create her own line of vegan sauces and teach recreational classes at ICE. She’d like to contribute education on Southern, African and Caribbean cuisines as well as nutrition and plant-based diets.

“My overall goal throughout life is to help people, and right now, I’m doing it through food,” she says. “There are other realms that I’m willing to explore as time goes on.”

Thanks to ICE, Shenarri knows that restaurant cooking isn’t the only way she’s equipped to help others. She already designs healthy meal plans for clients and caters vegan events. “ICE really opened up my eyes to the industry,” she says. “I didn’t know I could do so many things with my diploma. I definitely consider myself a chef first, but I’m not limited to that.”

This is so inspiring... thank you!