Growing up in a kosher home, Seth Warshaw (Culinary, '07) couldn’t eat or learn to cook with basic ingredients like shrimp, clams or mussels because shellfish are not kosher. His desire to become a well-rounded chef led him to ICE, where he learned the key tenets of running a kitchen that he has instilled at Etc Steakhouse in Teaneck, New Jersey, for over a decade.

“Learning those techniques was a big reason why I wanted to go to culinary school,” Seth explains of his interest in cooking non-kosher foods. When he began classes at ICE, he discovered the difficulty of working with ingredients he couldn’t eat. “It was very hard,” Seth remembers. “Not being able to taste anything made me feel a little bit like an outsider. It definitely was challenging, but my goal was to learn as much as I could. I wanted to get something out of it and I did.” 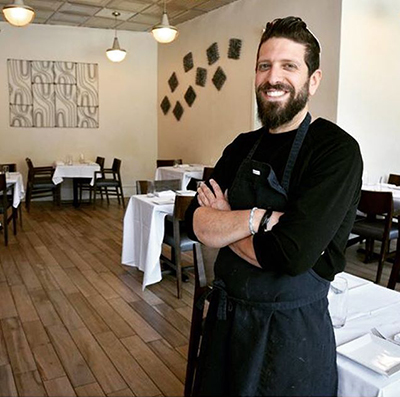 Seth completed his externship at Fumio in Livingston, New Jersey, and worked there for a bit before pursuing his dream of opening a restaurant. When he got a tip from a friend that there was an open space in Teaneck, he took advantage of the opportunity.

While he always knew he wanted to run his own kitchen, Seth didn’t have a particular concept in mind. In fact, the decision to open a steakhouse was rather practical. “In kosher restaurants, you can have meat or you can have dairy — you cannot have them together,” Seth explains. “When we signed our lease, the kosher supervising agency told us there was going to be a meat restaurant across the street. Once they opened, I took a look at the menu and it was a meat pasta restaurant. I decided our spot would be a steakhouse so we’d be different.”

Etc aims to provide a different experience than that of a typical steakhouse. Rather than cuts of beef with sides à la carte, the menu is more composed, featuring full entrees. “The vision was to think out of the box and to use ingredients and flavor combinations that are more unique. We try to think creatively,” Seth says.

While offerings have evolved over the restaurant’s 11 years, certain menu items have been available since the beginning, like the warm potato salad. Created with roasted, deep-fried potatoes tossed in tarragon, mayo and red onions, the dish is a crowd-pleaser.

For the past year or so, Seth and his team have been implementing a new menu system. “We took the idea from Next to change the menu around every few months,” Seth says of his inspiration. “We take a country and try to incorporate its cuisine into our style of cooking. Of course, there are ingredient constraints with things not being kosher. We’ve done China, Mexico, the Caribbean, and now we’re doing France.” Seth creates his own interpretation of classic dishes. For example, he’s crafted a version of a pan tarte flambée, but he can’t use dairy, so he uses a burnt onion mayonnaise with homemade beef bacon served on a crepe, as opposed to a more traditional flaky dough. “We’ll take an idea and run with it,” Seth says.

Like any good chef, Seth continuously strives for improvement. “Obviously, we’re never entirely satisfied with what we’re doing. We always want it to be better, the flavors to be sharper, the plates to look nicer. We’re constantly trying to improve on yesterday,” he says.

Even so, there’s no question that Seth is an expert at engineering compelling flavor profiles without using dairy. For steaks, Seth uses canola oil, which he says has a good smoke point and flavor. “When you have a good piece of meat, you just want it to taste like that. I use a cast-iron pan, oil, salt and pepper,” he explains. Nutritional yeast can be used for a cheesy flavor, while margarine acts as butter as long as it’s not melted. For desserts, Seth uses Rich Whip and soy milk. “There are definite drawbacks taste-wise and with texture and mouthfeel, but the more you play with it, the better you get at it.”

Seth estimates that 97% of his customers keep kosher, so they know exactly what to expect. While plenty of Seth’s guests are local, families travel from larger Jewish communities in the tri-state area for a high-quality kosher dining experience. People come to Etc from New York City, South Jersey, Rockland County and beyond.

In reality, the lack of kosher dining options can actually keep people from traveling. That’s why Seth and his childhood friend Yitzi Kessock founded Rustic Elegance, which designs kosher catered trips in America’s national parks. For the past two summers, Seth and Yitzi have led groups of about 60 people into Glacier, Yellowstone and Grand Teton national parks and provided them with outdoor adventures and beautiful kosher meals. “You wake up every morning and you have the mountains as the first thing you see — it’s not going to be a bad day,” Seth says.

Whether he’s cooking in his New Jersey restaurant kitchen or in the middle of nature, there are lessons Seth learned at ICE that he applies every day. “It comes down to the basics: Mise en place, make sure you come ready, if you’re five minutes early then you’re 10 minutes late. I try to be very good about those things with my team,” he says.

Get the basics down before starting your business idea in ICE’s career training programs.