In Search of Chocolate in Old New York City

Early last year, as the ICE staff was preparing to move from the school’s longtime home in the Flatiron District of Manhattan to its newly constructed downtown facility, I was immersed in organizing the details for our unique bean-to-bar Chocolate Lab.

Considering our new digs in the oldest part of the city, it hit me that perhaps we were bringing chocolate back to the neighborhood—old New Amsterdam. I began to ponder the chocolate history of New York City. Surely there must have been numerous traders, processors and merchants dealing in the popular product at various points in the city’s nearly 400-year history. Little did I realize how difficult the search for answers would prove, yet what I have uncovered thus far has only reinvigorated my quest.

I’m a bit of a history buff—with interests in our culinary past, of course, but also the rich history of the vibrant city I’ve called home for over 12 years. I’ve also spent countless hours tracing my family histories back to Eastern Europe, as well as my maternal lines back to England and Holland. My ancestors arrived in the first waves of settlers in the American colonies dating back to the mid-1600s.

My meandering research came quite close to home at one point—a Dutch extended cousin turned out to be a prominent businessman in 1650s New Amsterdam, operating a brewery on Beaver Street, the site occupied today by a towering office building in Manhattan’s Financial District. This personal discovery fueled my broader search for chocolate in this colonial outpost—if I could find a distant relative in the neighborhood, surely I would eventually find traces of cocoa as well. But first, I had to step back a bit further to consider the greater story of chocolate’s travels.

The story goes that Columbus encountered cacao in the course of his later voyages at the turn of the 16th century, but was unimpressed or simply unaware of its attraction. At best, he may have traveled back to Europe with a token handful of the beans, which only grow in the tropics. Most historians agree that it was through Hernando Cortes, who conquered the Aztecs in the 1520s, that chocolate would make inroads into European aristocracy, eventually gaining popularity on par with coffee and tea.

Throughout much of its history, chocolate was consumed as a beverage in coffeehouses or sold in small coarse-textured blocks (and only upon its arrival in Europe was sugar added). During its first century in Europe, accessibility to chocolate soon spread beyond the noble classes and was enjoyed by a wider audience. The drink thrived in those countries whose empires extended to tropical zones where cacao could be cultivated for the masses back home.

By the time the American Revolution was underway, chocolate had firmly established itself in the colonies. Numerous references and connections to the drink have been attributed to patriot luminaries like Ben Franklin, Alexander Hamilton, Thomas Jefferson and George Washington. The first colonial chocolate manufacturer was Baker’s, established by 1765 in Dorchester, Massachusetts (the famous brand still exists today). While this may be true in large-scale production, there were many small local producers and bean grinders predating Baker’s throughout the larger cities of Boston, New York and Philadelphia.

These craft producers, around 70 total, are the objects of my interest. Unsurprisingly, they have been difficult to trace in great detail. Perhaps because chocolate at this point was still minimally refined, there were likely few who devoted themselves to chocolate full time. Individual grocers and local mills may have handled very small quantities. The dearth of pre-revolution information about chocolate culture in Lower Manhattan didn’t discourage me, but it did lead my search into a different direction. 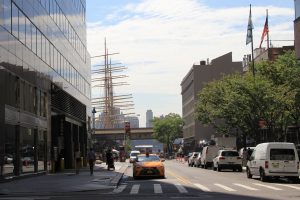 We assume that chocolate first arrived in America as a European import, but when and where are still unclear. The earliest written accounts of chocolate in the northeastern colonies do not appear until the 1660s, with sporadic references to trade shipments continuing into the 1670-80s. By the time England assumed control of the renamed New York in the 1660s, its cocoa trade was taking shape. Their early colonies in the Caribbean had begun planting cocoa and adding sugar to it.

As trade from the Caribbean increased—and by extension, from South and Central America—the colonial port cities became vital links in the supply chain. The port of New York City quickly became an important hub in this network of the cocoa trade—a pivotal discovery in my research. By the early 1700s, shipping documents reflect a significant flow of cocoa beans from the West Indies into New York; while much of the precious cargo was ultimately destined for Europe, local consumption was on the rise, too. Great quantities of cocoa were arriving from the Venezuelan port of Curaçao via a network of Jewish merchants of Spanish descent.

This network grew to include dozens of businesses, some of which would eventually branch out into local wholesale and retail chocolate trade. I had finally caught a glimpse of the history I had been hoping to find—the emergence of the cocoa trade in lower Manhattan. What’s more, the city has more contemporary ties to the cocoa trade as well. The New York Cocoa Exchange occupied the narrow flatiron-shaped building at the intersection of Wall, Pearl and Beaver Streets from 1939 to 1979 (the building still bears that name, though its tenants now include a sushi restaurant and condominiums). At present, the offices of Atlantic Cocoa, a major player in the international chocolate trade, are located just a short walk from ICE, adjacent to Battery Park.

Among the names of early merchants, several clues began to emerge, and with them more details into the chocolate world in colonial New York. While the extent of their processing and manufacturing is not yet clear, I finally began to pin chocolate-related locations to the map. Spanish-born Jacob Louzada was one such early merchant, active through the 1720s; his son Aaron is reported to have processed chocolate as well. I came across the Gomez family, with three generations involved in chocolate—first with trade and later with manufacturing.

Moses Gomez was active in trade and chocolate making as early as 1700. By the 1750s, Daniel Gomez advertised the sale of drinking chocolate near “Burling’s Slip”—today, near the foot of John Street and South Street at the East River. More promising is a surviving advertisement from 1780 describing the shop and “chocolate manufactory” of Rebecca Gomez, which carried all manner of imported food goods, including her own superfine “manufactured chocolate, warranted free from any sediments and pure.

Great allowance made to those who buy to sell again.” Rebecca’s shop stood at the corner of Nassau Street and Ann Street—a busy intersection of its day and a stone’s throw from the ICE Chocolate Lab. Rebecca’s son-in-law, Abraham Wagg, was a grocer who also dabbled in chocolate. Other 18th century names and locations have surfaced as well, such as Peter Low, who had made chocolate in Manhattan before moving the business across the river to New Jersey, as well as Peter Swigart and his chocolate-making shop on Bayard Street, in what is now the heart of Chinatown. 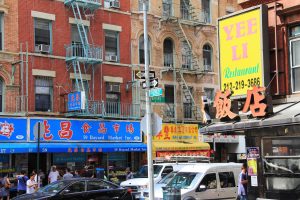 While it remains difficult to find traces of chocolate in the very earliest days of the Dutch colony, we see that it became a common item on the docks and in the shops of New York in the 1700s. After unearthing the stories of these early entrepreneurs, I am excited to discover what I might find as chocolate making in this neighborhood has evolved, coming into the 19th century and, ultimately, full circle back to our little lab on the third floor of Brookfield Place at ICE!