James Peterson is a legendary culinary figure. He has just published his 15th cookbook, the most recent in a line of impressive and important publications. His writing has addressed such vast topics as Sauces or Vegetables, all while keeping a focused and grounded view of his subject matter.

Not only does Chef James (or Jim, as he prefers to be called) spend enormous amounts of time researching and recipe testing for each book, but he also does all his own food styling and photography, making each book a true labor of love. In addition to garnering a slew of IACP and James Beard awards, his work has also provided him with a devoted following of chefs, cooks, and amateurs. 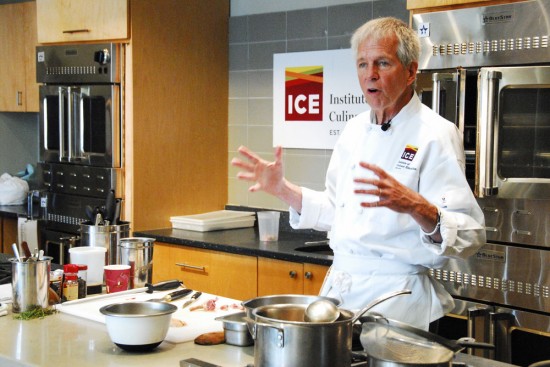 Yet, while Jim has admiration and appreciation for all kinds of cuisines and techniques, his heart always returns to the rich and comforting flavors of classic French food. For his recent cooking demonstration at ICE, he thoughtfully chose to demonstrate squab salmis over a cassoulet of fava beans and foie gras. Squab, commonly known as pigeon, is Jim’s favorite game bird; the deeply red meat is intensely flavored, yet tender, and requires the highest level of technique to cook, due to its diminutive size. Whereas Americans are most familiar with the relatively bland chicken (which requires strong sauces and marinades to impart flavor), with the squab, flavor can be layered and built using the various parts of the bird itself. 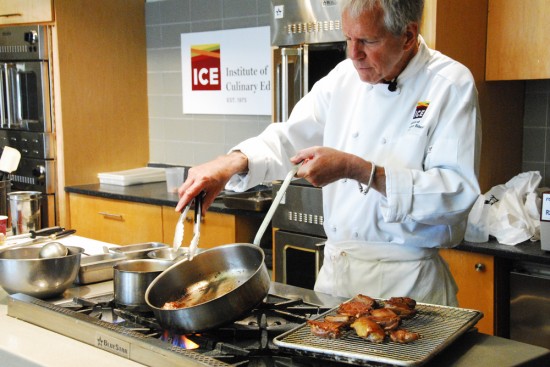 Here, Jim uses the innards of the squab to build a sauce, a technique rarely seen outside of France. Americans love gamey flavors when they are found in an expensive dry aged steak, but tend to shy away from using organ meats in their cooking. But once we get past this aversion, we discover that livers and kidneys can add indescribable earthy, mineral-laden, rich flavors to what was formerly a simple poultry jus. Jim demonstrated how to smooth the organ meat into softened butter, transforming a simple beurre monté into a transformative experience. And to balance all that earthy richness in the sauce, nothing beats a classic French cognac brandy.

To stand up to such a rich preparation, Jim chose to elevate the classic cassoulet. ICE culinary students are experienced with the traditional cassoulet as a peasant dish, made with white beans and tough meat cuts. Jim’s version swaps green and tender fava beans for traditional white beans and, most excitingly, includes foie gras. Served still warm, the foie half melts into the stew, creating a base that is properly thick and rich to accompany delicate squab. 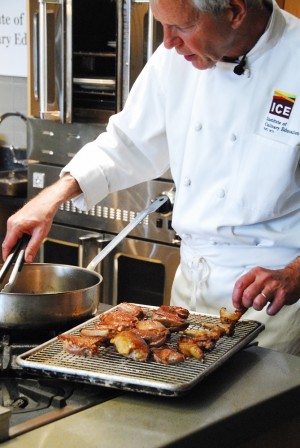 In an era where whole animal butchery and nose-to-tail eating is surging in popularity, organ meat remains an underused resource and is often relegated to the compost pile. Jim’s skilled use of the prized foie gras (made of liver) and the squab's offal was an inspiring example of how we can turn to the traditions of the past to help inspire our culinary future.

Click here for a listing of future demonstrations and lectures at ICE.