From Reindeer to Blinis: Exploring Finnish Cuisine in Helsinki

This past August, some of my family members and I went on a Baltic cruise. In every port and country where we stopped, I was curious about the local cuisine. We had taken several tours, but it was only in Helsinki, Finland that we took a dedicated food tour. Here’s a “road trip report” of what I learned - and in many cases ate — in this lively seaside city and country capital.

Based on its geographic location and history, the influences on Finnish cuisine come from the east and the west. From the west (western Europe and Scandinavia) come dishes and ingredients like pickled fish, hard bread, cheese and smoked meat. From the east (Russia and Ukraine) come foods like blinis, sauerkraut, curd cheese, Karelian pastry, sour milk and mushrooms. Perhaps one of the most unique local foods I tried was poro — that’s reindeer. 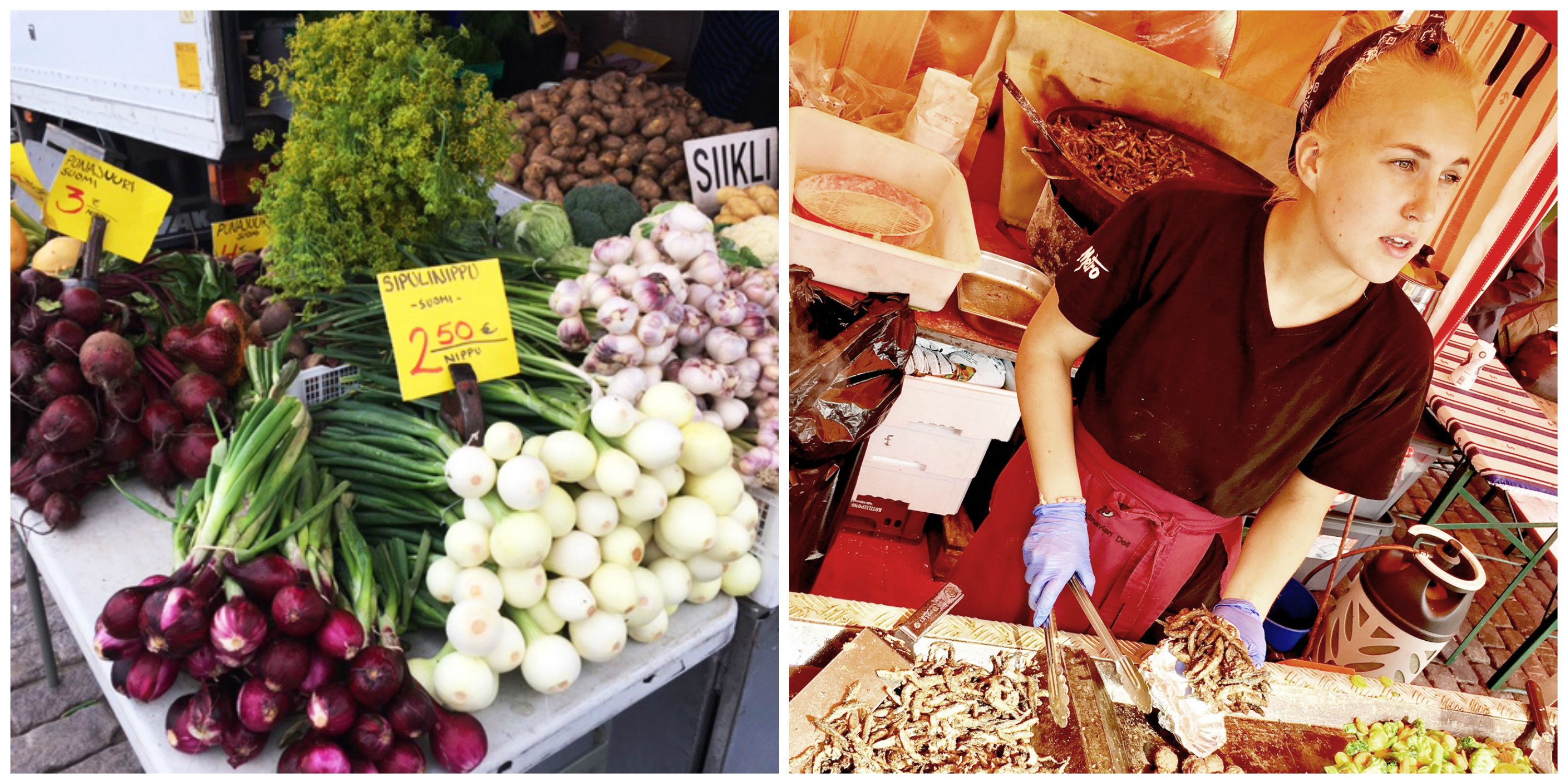 In August, during our visit, the seasonal specialties included crayfish, chanterelles, apples and wild duck. In September, the seasonal favorites include Baltic herring, hare, lingonberries and a seafood specialty called vendace — a small whitefish that’s rolled in rye bread crumbs, quickly fried and served in a bun. As our trip was in the summer, the local greenmarkets we passed early in the morning were overflowing with wonderful-looking produce and fruit.

Our Helsinki food tour was led by Heather Domeney, a native of Tasmania who moved to Helsinki after marrying her Finnish husband. Her tour route and the accompanying food depends on the time of day you start. We had limited shore leave time, so we began promptly at 8:00am, beginning the tour with a tasting of traditional breakfast foods.

The first stop was a small bakery named Kanniston Leipomo. Here we sampled a Karelian rice pie, which is a small, football-shaped rye pastry with rice porridge in the middle. At the second stop, Cafe Kuppi & Muffini, we tasted barley porridge with toppings of our choice. As shown in the photo, I chose strawberry, rhubarb compote and butter. Heather explained that items like these, along with ham and salami, constitute a typical Finnish breakfast. Standard American breakfast items like scrambled eggs are not so common. 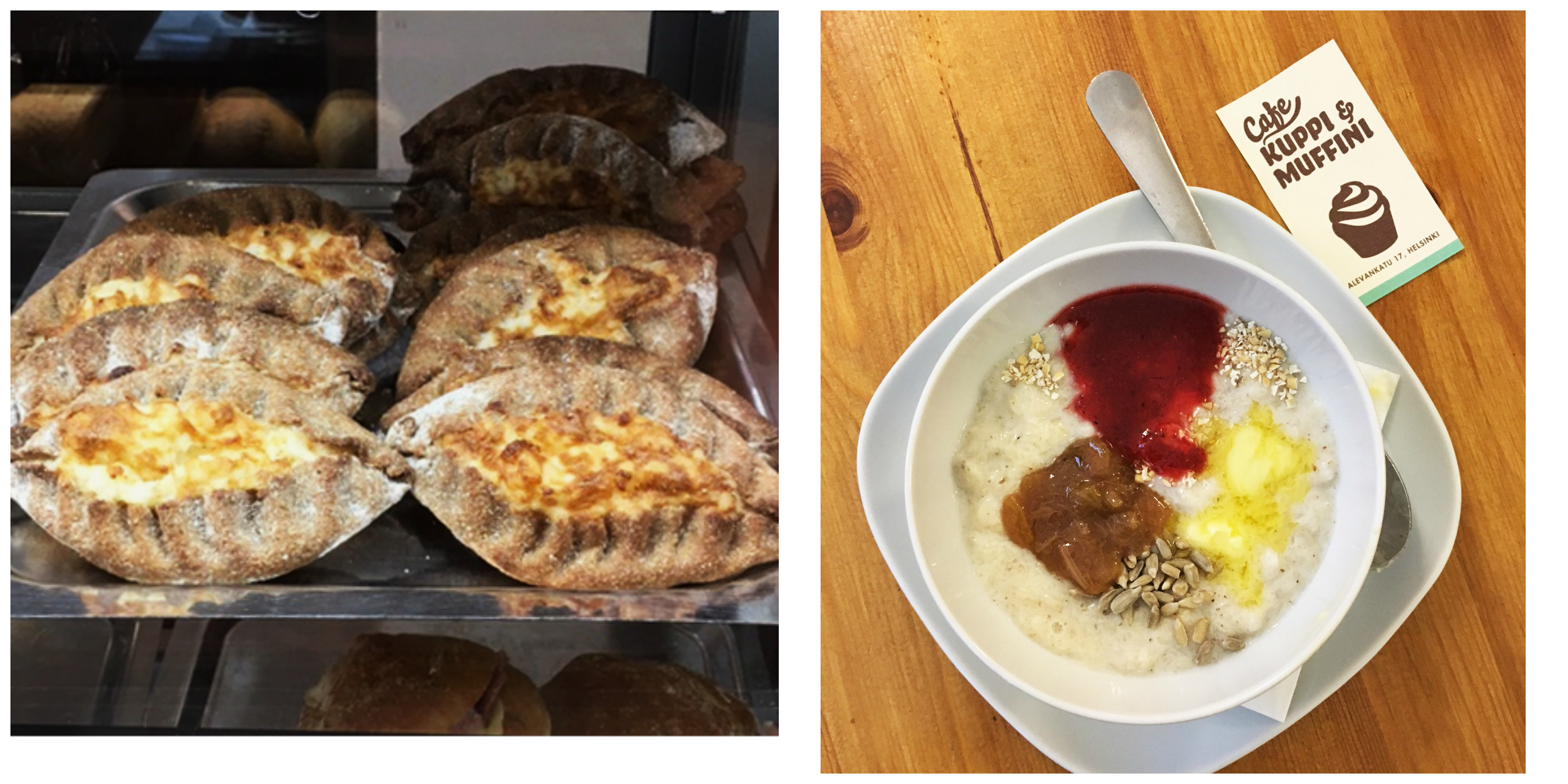 Our third stop was a famous department store called Stockman, which opened in 1862. They have a lower-level food hall that’s a sort of Finnish Harrods, the renowned London department store. It was interesting to see the mix of fresh foods, breads and produce available.

First, we headed to the seafood department, where Heather arranged a smoked and cured salmon tasting. As for grocery items, some of the unique items were munavoi (a mixture of butter and cooked eggs) and porosalami (reindeer salami). 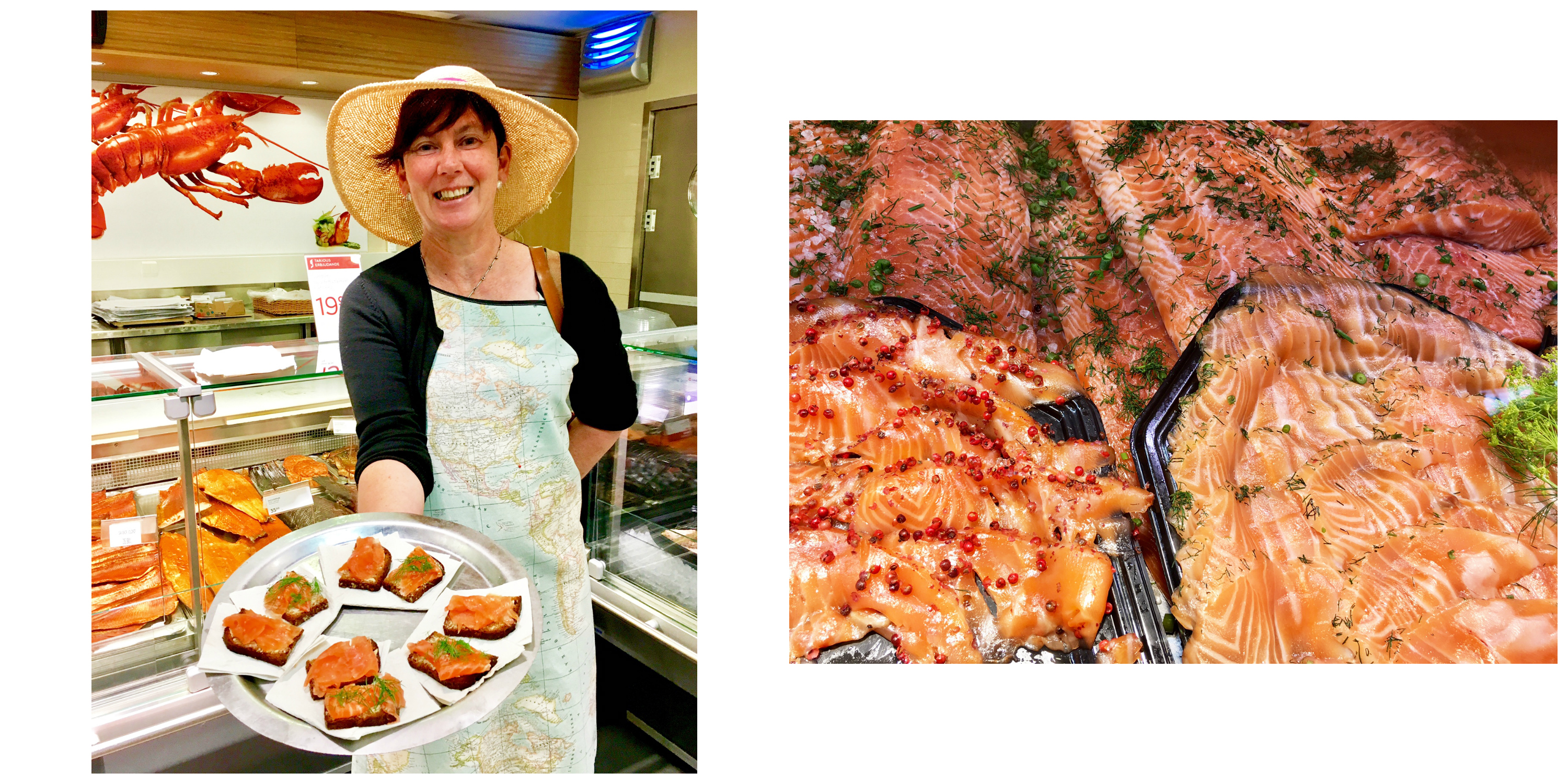 When it comes to beverages, Finland has some things to talk about. First, the average person drinks 12 kilograms of coffee per year — the highest rate in the world. The Finnish produce several interesting indigenous beverages like lakka, a cloudberry flavored liquor, and sima, which is a variation on mead and flavored with lemons and raisins.

Like the U.S., Finland experienced a period of prohibition from 1919 to 1932. After prohibition, the government decided that all alcoholic beverages with alcohol content higher than 4.7% would be sold in a state-run retail chain named Alko. Today, there are about 355 of these stores throughout the country. While we didn’t vist Alko, we did stop at a small, independent beer retailer (where all beers were 4.7% alcohol or less) and a brewery-restaurant called Bryggeri. 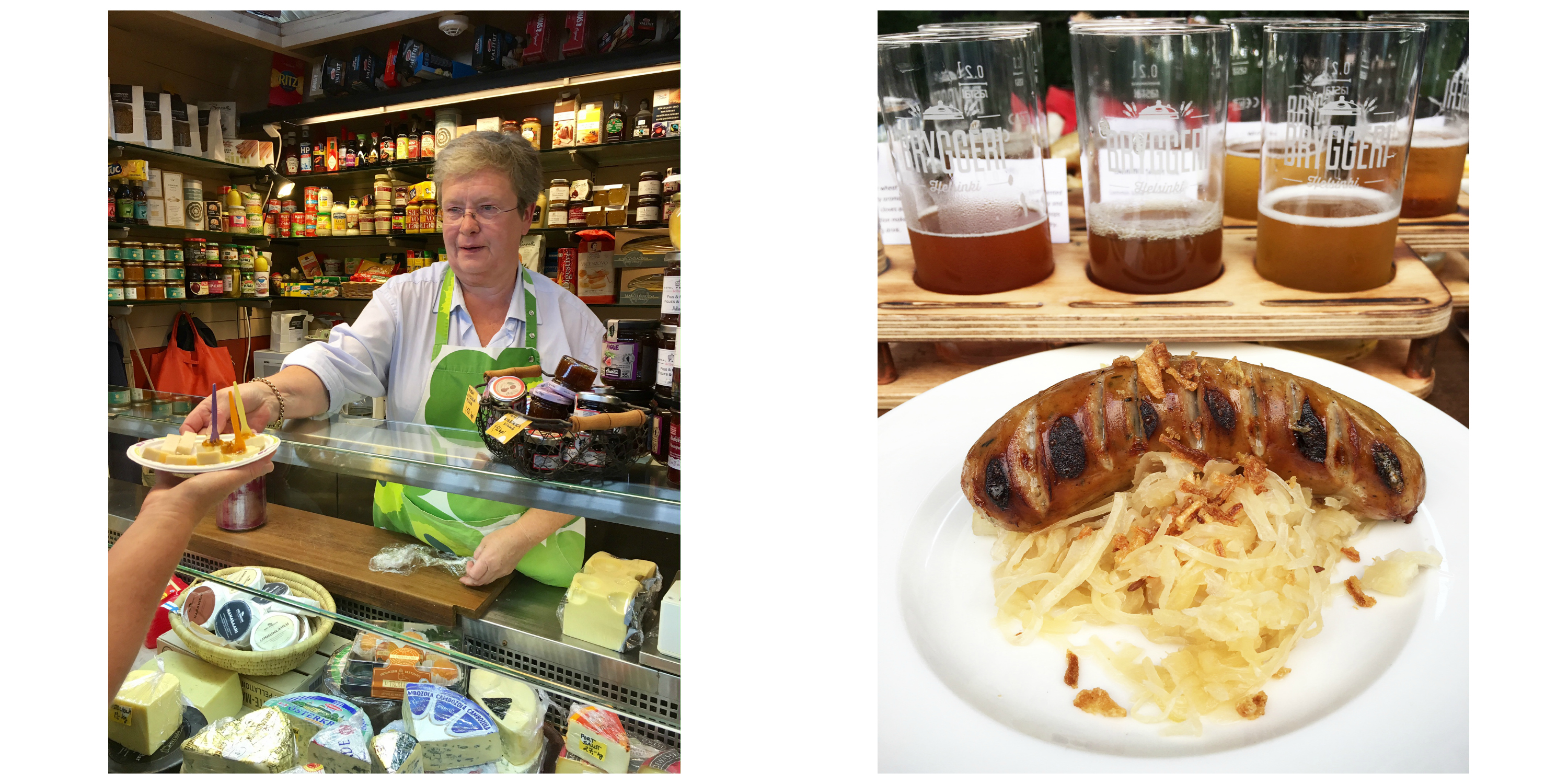 At Bryggeri, we enjoyed a tasting flight of beers made on the premises, along with traditional accompaniments of grilled sausage and sauerkraut. The most traditional of the beers we tasted was Lammin Sahti, which is made with barley and rye malts, and has next to no carbonation — both odd and interesting on first taste. Our group agreed that a Brooklyn- or Portland-based modern beer aficionado would feel right at home in Helsinki.

Our next stop was Vanha Kauppahalli, a classy and classic portside covered food market in operation since 1889. Heather arranged a quick tasting of local cheeses at a shop with a name that was rich in vowels – Juustokauppa Tuula Paalanen. As we made our way through Vanha Kauppahalli, what impressed us most was the Nordic seafood, particularly the range of smoked salmon, crayfish, prawn salads and other seafood specialties. What’s more, just outside the hall was a seasonal outdoor food market. There, the offerings were global street food like kebabs and chicken sandwiches, plus local fare like reindeer meatballs. 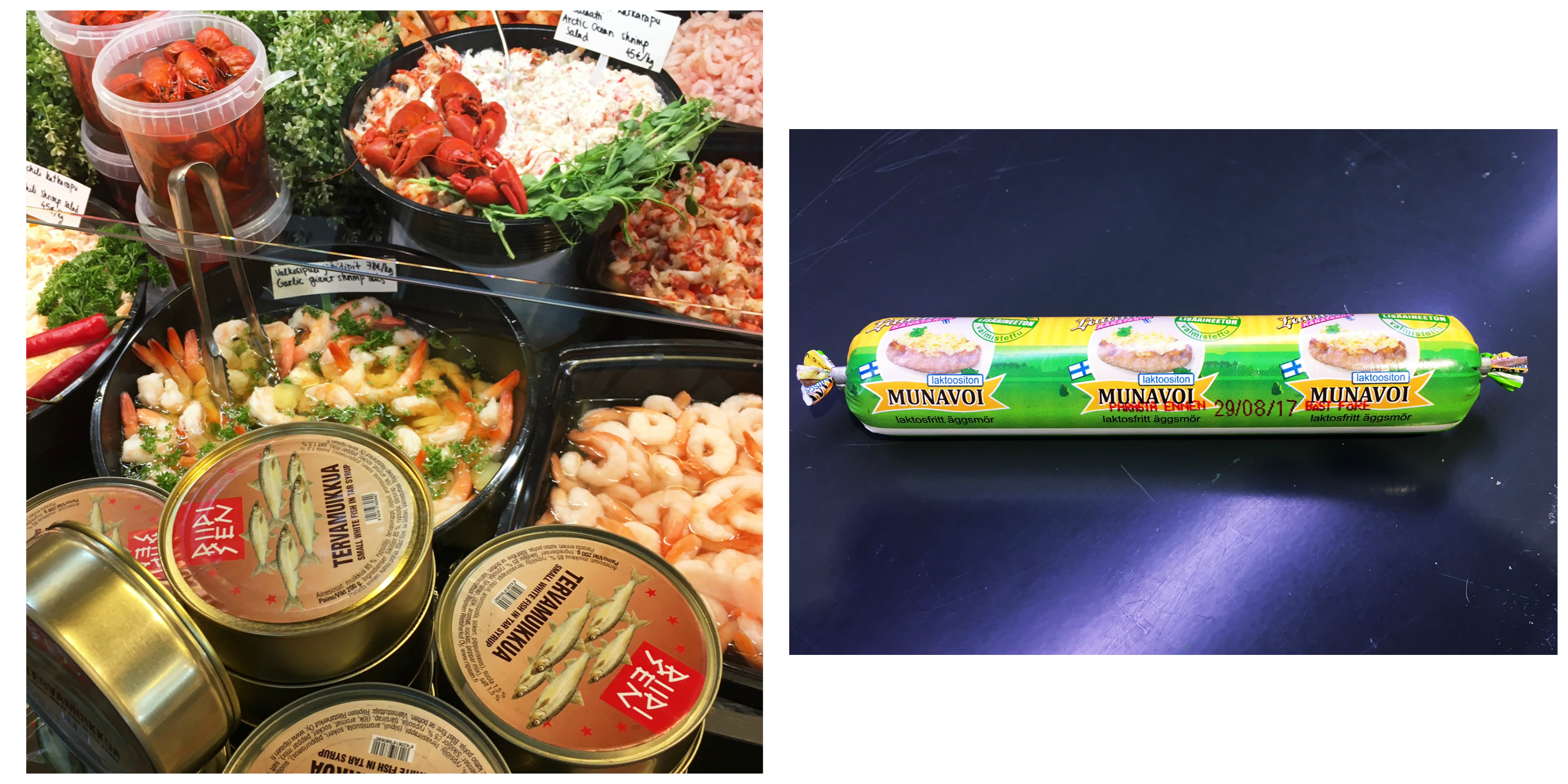 Though time did not permit us to visit more restaurants, I gleaned additional Helsinki restaurant intel from Heather and my own research. The first restaurants opened in Helsinki in the early 19th century. The most notable early eateries were Kappeli, Kamp and Kaivohuone.

According to the Finnish Hospitality Association, in 2014, there were 1,271 restaurants and 52 hotels in Helsinki. By 2015, the country was home to four Michelin-starred restaurants. As for a traditional restaurant entrée, most sources agree that a good place to start would be fried Baltic herring with mashed potatoes and beets.

After a quick but in-depth exploration of Helsinki’s cuisine, I can say there is much great food and drink to try in Finland’s capital. By the time we pulled out of the port, I already decided I should go back…with more days to eat!

All photography by Rick Smilow.It's time to embark on your culinary adventure - learn more about ICE's career programs.