Pure Nacional, an extremely rare variety of cacao, the plant used to make chocolate, was just rediscovered in Peru. 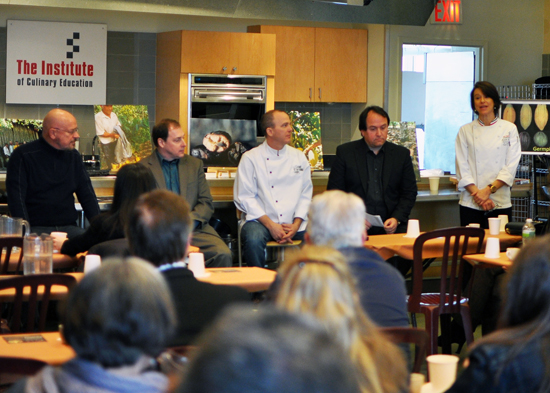 Yesterday, the team behind the discovery assembled at ICE to unveil the chocolate made from these newly discovered cacao trees. In 1916, diseases struck the Pure Nacional population in Ecuador and within three years 95% of the trees were destroyed. In 2007, Dan Pearson and Brian Horsley were sourcing fruit in Peru’s Marañón Canyon when they discovered cacao trees growing in a remote canyon. The tree’s cacao pods were filled with a mix of 40% white beans and 60% purple beans in the same pods, or in some cases, the pods were completely filled with white beans.

Familiar with only purple beans, they were curious about the rare white beans and sent leaf samples to the USDA for testing. Dr. Lyndel Meinhardt, Lead Researcher from the USDA Sustainable Perennial Crops Laboratory in Beltsville, Maryland, analyzed the genetic structure of the beans and found that they were Pure Nacional plants native to Peru. “The international cacao database has 5,300 entries. None are Pure Nacional with white beans. Cacao pods with 40% and 100% white Pure Nacional beans are an unprecedented discovery,” said Meinhardt. Horsley worked with the farmers to turn the unique cacao into chocolate. He said, “The small farmers and I had to learn quality practices together. White beans must be fermented and dried differently than purple beans, but it is unknowable in advance which is which,” said Horsley.

After two years, several site visits by fermenting and drying specialists, independent laboratory testing and 81 fermenting and drying trials, they found the answers to processing the precious beans. Pearson traveled to Switzerland to have the beans made into one-of-a-kind chocolate by a renowned Swiss chocolate maker recommended by Franz Ziegler of Ziegler Consulting and Paul Edward of Chef Rubber. Ziegler is an award-winning author and was named Pastry Chef of the Year in 2008 by the World Pastry Team Championship, where he has served as head judge since 2006. At yesterday's event, Pearson, Meinhardt, Edward and Ziegler all assembled to talk about the discovery.

ICE Chef Instructor and Director of Center for Advanced Pastry Studies Michelle Tampakis was there to introduce the team and taste chocolate. Not only is the story fascinating, the chocolate's flavor profile is remarkably full-bodied and nutty. Ziegler and Edward said, “In our combined 50 years of working with chocolate, we have never tasted flavors like this.” Now, Pearson and Horsley have founded Marañón Chocolate and are selling the chocolate to chocolate makers such as Moonstruck and Von Rotz.