Yesterday, ICE students got to meet with renowned Chef Andrew Carmellini, of Locanda Verde and The Dutch, for a frank conversation about life after culinary school and working in the restaurant business. 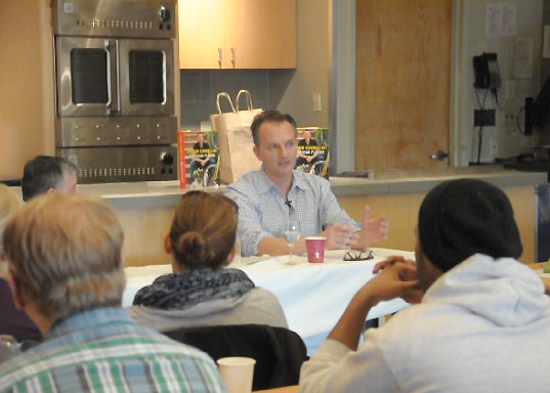 In addition to leading the kitchen at two incredibly successful restaurants, Carmellini is also the author of Urban Italian (Bloomsbury, 2008) and American Flavors (Ecco, 2011). He has worked with Gray Kunz at Lespinasse, at Le Cirque, opened Daniel Boulud's Cafe Boulud, and has won a Food & Wine’s Best New Chef award as well as two prestigious James Beard Awards. Moderated by Director of Student Affairs Andy Gold, Carmellini discussed the restaurant business, what it's like after culinary school, and what is expected of you when you join the ranks of a real restaurant.

The candid talk about the realities of the demands that will be placed on you by the chefs and businesses for which you will be working on was incredibly informative for ICE students just starting their careers. His advice on how to become a great chef was a chance for them to learn extremely valuable lessons. Carmellini emphasized the importance of seizing opportunities to learn as much as possible. He said, “It’s cliché, but as much as you put into it, you’re going to get out of it.” He recommended reading as much as you can, taking advantage of the different connections, and going to work at different restaurants. He said, “You can be very highly trained, but I always felt there’s extra stuff I wanted to learn.”

For example, Carmellini would spend an hour with the butcher at Locanda Verde in the morning so that he could get in an hour of practice butchering and doing meat and fish fabrication. He said, “The worst thing is to be a sous-chef who doesn’t know how to do everything. You want to be skilled enough to do everything. It’s hard to lead teams of cooks and hard to inspire crews if you can’t do everything.” Carmellini added that it takes concentrated practice to master any kitchen skill, “You’ve got to get a really good foundation, and that doesn’t come overnight. It takes time to get good at it.”

He emphasized that it is important to take the time to learn as much as possible. He recommended the students pick a restaurant that they like, and go there and work all of the stations through a couple of seasons to get experience with all different kinds of ingredients —“Butcher, make pasta, make soft shell crabs when they’re in season and work with black truffles when they’re in season.” Among the other lessons for the students was to never stop learning. Carmellini said, “I would love to take six months off and stage all over the world. From spice markets in Istanbul to soba in Japan, I would love it. The learning process never stops.”