Yesterday, noted pastry chef and ICE Chefs' Advisory Council member Pichet Ong was on hand at ICE to give a fascinating demo on desserts from Latin America made with savory ingredients. 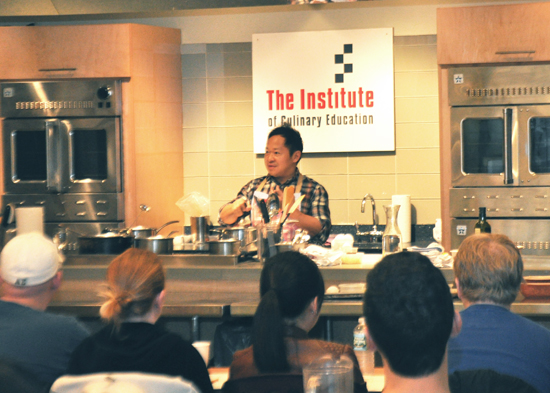 It was a fascinating look at how to use unusual or unexpected ingredients in dessert or pastry. For the demo, Ong prepared Olive Oil Torrejas with Manchego Ice Cream and Churros with Chocolate and Bacon. Though both torrejas and churros are traditional Latin desserts, Ong took the traditional flavors and spices and matched them to savory ingredients that could be used to put a contemporary spin on the dishes. Ong is known for his twists on classic desserts and combining different cuisines and flavors in his pastries.

He was born in Bangkok and raised in Hong Kong and Singapore, exposing him to a huge array of flavors to draw from. He has been named one of the Top Ten Pastry Chefs in America by Pastry Art & Design magazine and was selected as a Pastry Provocateur by Food & Wine. He is a multiple nominee for James Beard Awards. He has appeared on CBS News, Iron Chef and Martha Stewart Live.

Ong’s New York operations have included P*ONG, Spot Dessert Bar, and The Village Tart. Earlier in his career, he spent a number of years working with culinary luminaries Jean-Georges Vongerichten and Max Brenner. Now, he consults on culinary projects worldwide. Yesterday, he shared some of the dishes he has created for some of New York ’s hottest restaurants, including Coppelia, Toloache, and La Esquina, as well as his treats from his upcoming cookbook Desserts on a Whim.

To prepare the desserts, he drew on savory ingredients such as bacon and manchego to give the traditionally sweet desserts a contemporary and whimsical twist. Ong showed the students how to alter recipes to account for different ingredients. For example, when making manchego ice cream, he recommended cutting back on the fat content of the milk to compensate for the richness of the cheese.

Ong also shared that the base ice cream recipe could be used for any cheese ice cream to create an unexpected dish such as arugula soufflé with Stilton ice cream. It was a mesmerizing peek inside the mind of one of the food world’s most creative minds.