The Queen of Local Cuisine 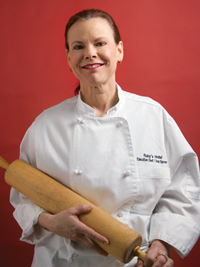 Among the many chefs reigning over ICE’s teaching kitchens, Chef Ana Sporer is known for wearing her passion on her sleeve. With a personality as bold as her fiery hair, Ana has a unique way of motivating students to bring their A-game, whether in perfecting their knife skills… or their Halloween costumes.

And if she’s not in the kitchen, you can be assured she’s outdoors — gardening or foraging on the property of her restaurant in upstate New York. It’s no surprise, given her dedication and infectious energy, that Ana can’t recall a time when she didn’t want to own her own restaurant. Growing up in Detroit, she would devour episodes of Graham Kerr and Julia Child’s influential cooking shows and eagerly help her Croatian grandmother craft traditional Eastern European recipes.

In fact, Ana has never worked outside the food industry. Her first job — at age 15 — was at her local Burger King, and she hasn’t left the kitchen since. After high school, Ana pursued her dream by first earning a degree in accounting. From there, she moved east to attend a culinary program at Johnson & Wales, and shortly thereafter landed simultaneous gigs at two New York institutions: the Russian Tea Room and the Waldorf Astoria.

Her first real dose of creative culinary direction came at NYC's Pierre Hotel, working under Joel Somerstein, a young, Jean-Georges-trained chef. “Joel was only 21 years old, but he was at the forefront of the fresh, seasonal trend that has come to dominate New York’s culinary scene. Twenty years ago, people weren’t changing their menu two times a week — but we were constantly developing new menu items at the Pierre.”

During her five years at the hotel, Ana’s passion for local, seasonal cooking grew and she developed a desire to share her enthusiasm with the next generation. So when she received a call from ICE, she was thrilled to take on a new role: “Teaching reflects everything I love about this profession. It’s a continual door to learning new techniques, and it’s all about the effort and time that you put into it.”

During the same period, Ana discovered a unique art deco property 130 miles north of the city. Donning the nickname “Ruby” that she had been given by her culinary school roommates, Ana, along with her husband, finally fulfilled her lifelong ambition of opening a restaurant: the acclaimed Ruby’s Hotel & Restaurant in Freehold, New York.

In the kitchen, Ana mirrors the training she gained at The Pierre. Her ever-changing menu draws inspiration from her own backyard — including a 7,000-square-foot garden, an apiary for bees and woodland rich with ramps and other foraged ingredients. “I’m so glad to see that other chefs are starting to grow things themselves. From a flavor perspective, if it was picked two weeks ago, who cares if it’s organic? The proximity to the plate makes the greatest difference.”

Ana’s entrepreneurial ambition and passion for quality ingredients has proved infectious for many of ICE’s most successful graduates, including Anthony Ricco (executive chef at Spice Market) and James Beard Award-winner Allison Vines-Rushing:

Ana was an integral part of my becoming a good line cook, but more importantly, she prepared me to be a great chef. She always moved and spoke like a real cook, never sugarcoated anything and let our class know exactly what we would be in for when we stepped into a restaurant setting. As the executive chef at Spice Market, [one of Jean George’s New York restaurants], I still pull from things we discussed in class all those years ago. – Anthony Ricco

One of Ana's career highlights occurred during her own time in culinary school: cooking for one of her original idols, Julia Child. “One of my favorite memories is from when I was a culinary student. I was working at the Biltmore Hotel [in Providence, Rhode Island] and Julia Child came in. She was the only person in the dining room, eating an omelet — that I made! — and kicking back a Heineken at 10 a.m. I loved that.”