Following his appearance on the show, Culinary Arts grad Peter Martinez is using his restaurant experience for a new catering concept in New Jersey.

Raised by a family of Cuban chefs, Peter Martinez (Culinary, ‘15) was taught to cook a medium-rare steak when he was in kindergarten. This knowledge, as well as a passion for food, served him well when he decided to pursue a culinary career that would entail launching a food truck-inspired catering company amid COVID-19 and being cast for Gordon Ramsay's food competition show.

The New Jersey native ended up earning a liberal arts degree and spending over a decade working at Whole Foods and Day One Electronics before he decided to change careers to restaurant cooking. With no professional kitchen experience, he reached out to local eateries on Craigslist and used his Instagram account as a resume.

Peter was quickly hired at a Cuban spot, where he was able to take over the menu and run the kitchen himself. But after about a year of autonomy, he realized he needed more formal training. “I wanted to learn etiquette and technique,” Peter reasons. “I wanted to be sharper at what I was doing and be able to describe my different methods. I was basically just a home cook.”

Peter enrolled in Culinary Arts at ICE's New York campus and arrived with a know-it-all attitude and serious dedication to his education. He was older than many of the other students in his classes and felt that he already had a valuable knowledge base. Though he initially butted heads with some of his instructors, contradicting their lessons, he soon realized how much he didn’t know. “ICE was life-changing for me,” he says. “It was a pivotal moment in my life. It set the foundation for my career. I can now say ‘there’s no way you’ll ever know everything.’”

An externship at Andrew Carmellini’s Little Park led to a full-time gig on the saute station after graduation, followed by a stint at Daniel Boulud’s DBGB Kitchen & Bar. Eventually, though, the commute into Manhattan began to take a toll on Peter, who spent a large portion of his paycheck on transportation. So he returned to New Jersey and secured a butcher role at Marc Forgione’s American Cut in Englewood. By the time he mastered the art of fabricating meat, he was promoted to sous chef.

Peter then moved on to a sous chef position at Halifax, the W Hotel Hoboken’s farm-to-table restaurant specializing in Nova Scotian fare. During this tenure, he honed his seafood skills, filleting fish and crafting pates, and appeared as a contestant on "Chopped."

While Peter didn’t win the competition (he came in second place), he managed to impress judge Chris Santos, who approached him with a job offer soon after. The celebrity chef wanted to employ Peter at his Lower East Side hot spot Vandal, but Peter gratefully declined. “It felt like I was climbing up the ranks at Halifax and I was learning a lot, so I turned it down,” Peter explains.

When Santos reached out again — this time offering a more competitive salary — Peter was compelled to accept. Suddenly, he was a sous chef at what he considered the city’s hottest restaurant, turning out shareable plates of international street food for high-profile diners like Leonardo DiCaprio and Chance the Rapper. “It was insane,” Peter remembers.

Once again, however, the commute became daunting. Peter had a newborn daughter and didn’t want to miss out on raising her, so he gave his notice at Vandal and searched for a job closer to home. He was hoping to find a restaurant with the same volume, a similar concept and of equal caliber. “At first, I had a little trouble because I didn’t think that Jersey had anything like it,” Peter admits.

He took a break to eat and visit family in Miami before he landed a sous chef role at Pier 115 Bar and Grill in Edgewater, which certainly had the volume to match his previous gig. In the summer, the team handled about 1,000 covers each weekend. And when Peter was upgraded to chef de cuisine, he was able to design the elevated, seasonal menu of his dreams. “It became such an amazing experience,” he says. “I was running the kitchen at a multi-million-dollar restaurant by myself. It built me to who I am today.”

When Peter’s son was born, he took paternity leave. The time off became permanent when Pier 115 needed him to come back before his leave was up, so he let the position go. He worked at a few different places and then COVID-19 hit.

Since Peter did not want to take the risk of working in a restaurant during the pandemic, he decided to get creative. “I was cooking for my family, and I was so tired of everything on UberEats in my vicinity,” Peter recalls. “I asked myself what I would want and the answer was a food truck.”

However, the expenses associated with setting up an actual truck were prohibitive, so Peter channeled all the elements of such an operation into a catering company called The Digital Food Truck. The venture began with dishes like sliders and pulled pork made with local, sustainable ingredients, which he would cook in his home kitchen and deliver directly to customers. “It took off,” Peter says. “People loved the concept, which I based on a combination of food, music and vibes. I specialize in elevated Latin fusion, mixing Cuban and American comfort food.” 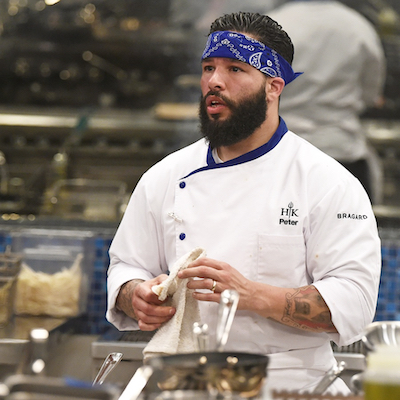 Peter’s menu continues to evolve, with special lineups for holidays, and it continues to sell out. The rapid success of his ghost food truck is only amplified by his recent run as a contestant on season 19 of "Hell’s Kitchen," which filmed two years ago and is airing now. “I learned so much from Gordon Ramsay,” Peter acknowledges. “He’s a legend and his aura is amazing. It was really 'hell,' though. It was tormenting out there. It was extremely difficult. Those punishments are real. They try to mentally break you.”

It was revealed in episode 5 that Peter voluntarily left the competition because he was severely stressed and struggling with the fact that he was unable to communicate with his then-pregnant wife. Still, he reflects upon the experience fondly and is enjoying the added attention from its broadcast.

In addition to operating a booming new business, Peter is working on a cookbook that he hopes to publish in the near future. He’s not afraid to keep trying new things. “Being humble and respectful and always wanting to learn will keep you on top of your game.”

Complete your formal education in less than a year with ICE's career programs.