Memories of Menus Past

When approached by young cooks and students seeking advice on what to read, which chefs to follow on social media or which techniques they should study, I always underscore the importance of traveling and going out to eat. When you’re forming your style and sense of what is “good,” it’s essential to taste as much as possible—be it at your local bakery or a gastronomic temple overseas. I didn't make much money as a young chef, but by scrimping and saving what little I did earn, I invested in my edible education as often as I could afford. 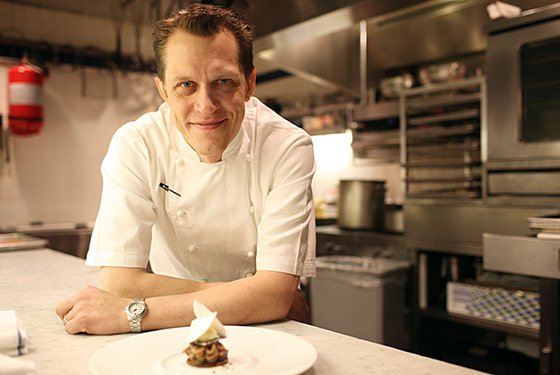 In turn, my formative years as a cook are defined as much by the meals I experienced as a guest as by the professional kitchens in which I toiled. In the Internet age, international culinary inspiration may be instantly accessible, but it’s a pale substitute for experiencing it firsthand.

Turning the tables and participating as a guest not only places a dish in its proper context but also provides young cooks valuable exposure to the front-of-house experience. Today, we have the ability to document each dish, feeding our virtual timelines with instant images, yet I've always preferred more tangible souvenirs. Early on in my experiences of “important” meals, I developed the habit of collecting menus, resulting in an archive that now spans almost twenty years.

Once I moved to a storage-conscious, New York City apartment, I stopped saving menus for a time, but I've recently taken up the practice again. Holding a physical remnant from a meal serves as a time capsule, transporting you back to a precise moment and place, sharpening blurred memories in a way that a camera phone snapshot cannot.

A full menu also displays the context of a chef's perspective beyond a singular dish, and can mark a particular era in a chef's evolution over time. My menus typically get filed onto a shelf or eventually tucked away into a box.

Every time I uncover a stack that I haven’t looked at in years, it evokes many vibrant, multisensory memories. Each menu has some personal significance—many from restaurants long-shuttered or listing dishes that would later achieve icon status—and a select few bear historical importance worth sharing with others. Below, I’ve curated a sample of menus from meals that inspired and educated my development as a young cook. 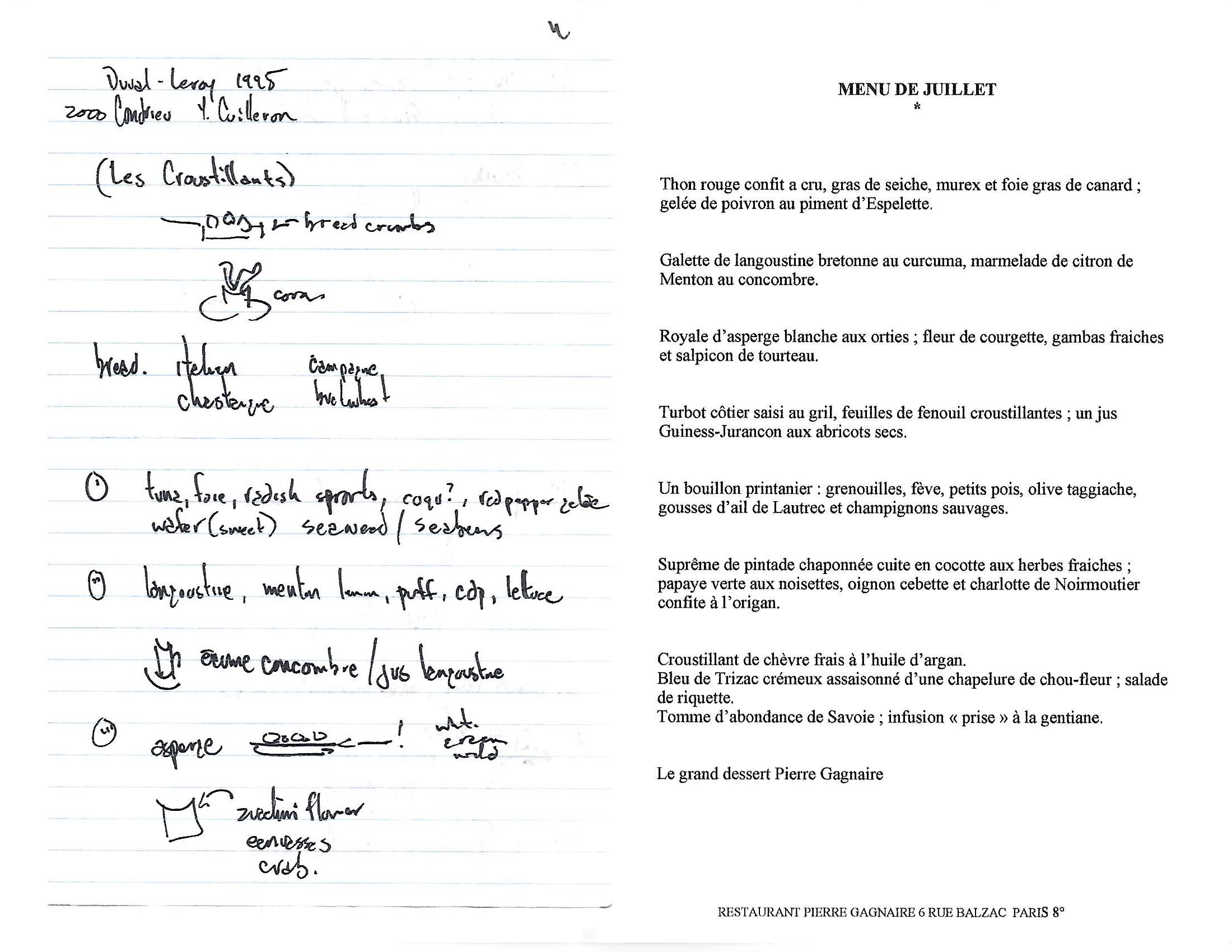 Pierre GagnaireParis1998-2002 Pierre Gagnaire was a hero of mine from the mid-90s onward. During my first visits to Paris, a solo lunch at his eponymous Michelin three-star restaurant was a compulsory ritual – four meals in total. His wildly inventive flavor combinations still read as fresh and relevant to this day. These meals also cemented my ambition to work at the very highest level of fine dining. 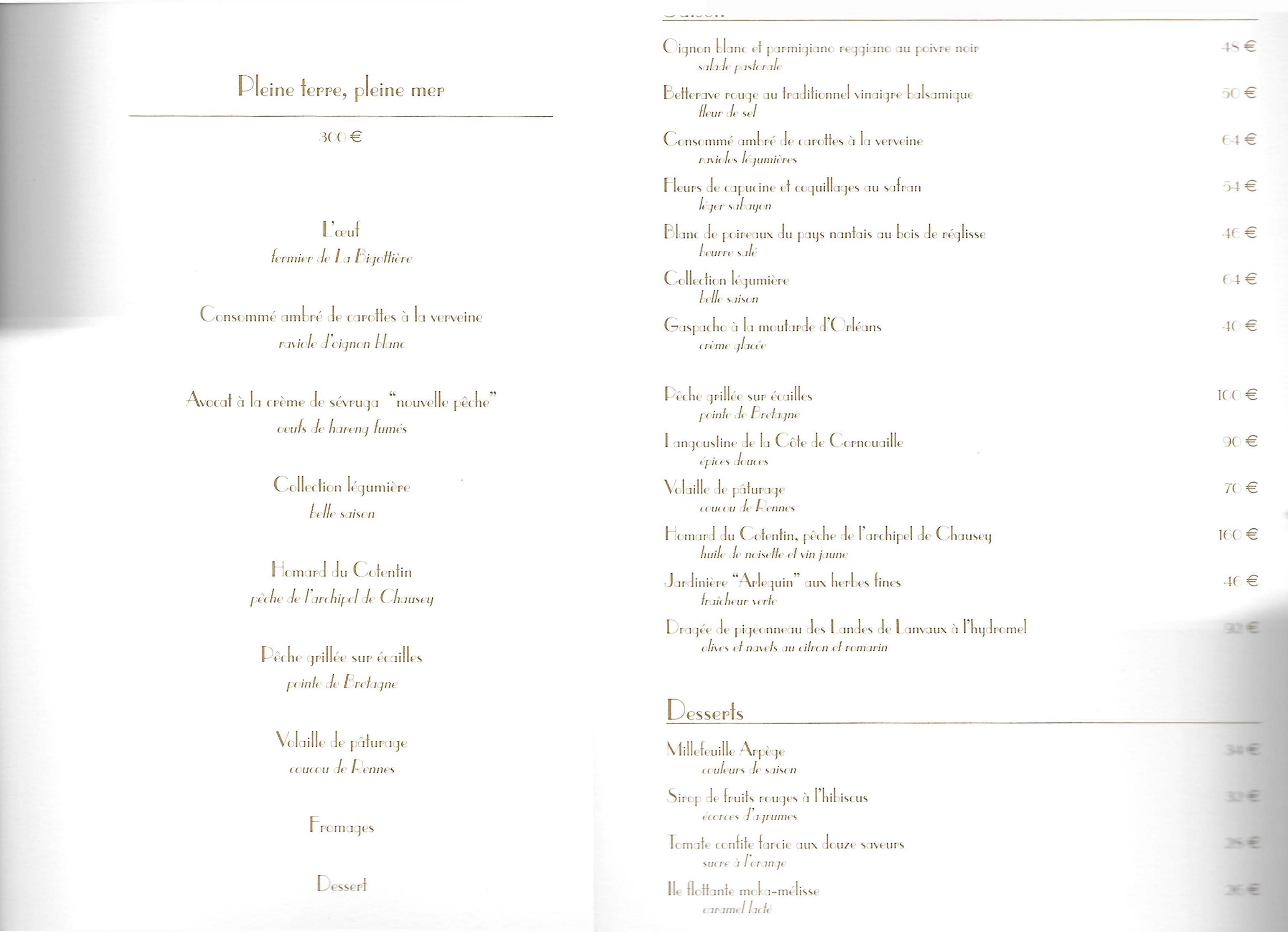 I often dined at Gagnaire one day and at Arpege the next. Each represented two very different styles of cooking, both were equally inspiring. The period of my repeat visits coincided with Alain Passard’s much-publicized transition toward a vegetable-centric approach. A highlight of one of these lunches was being invited to sit and chat with Chef Passard as he ate his own lunch. 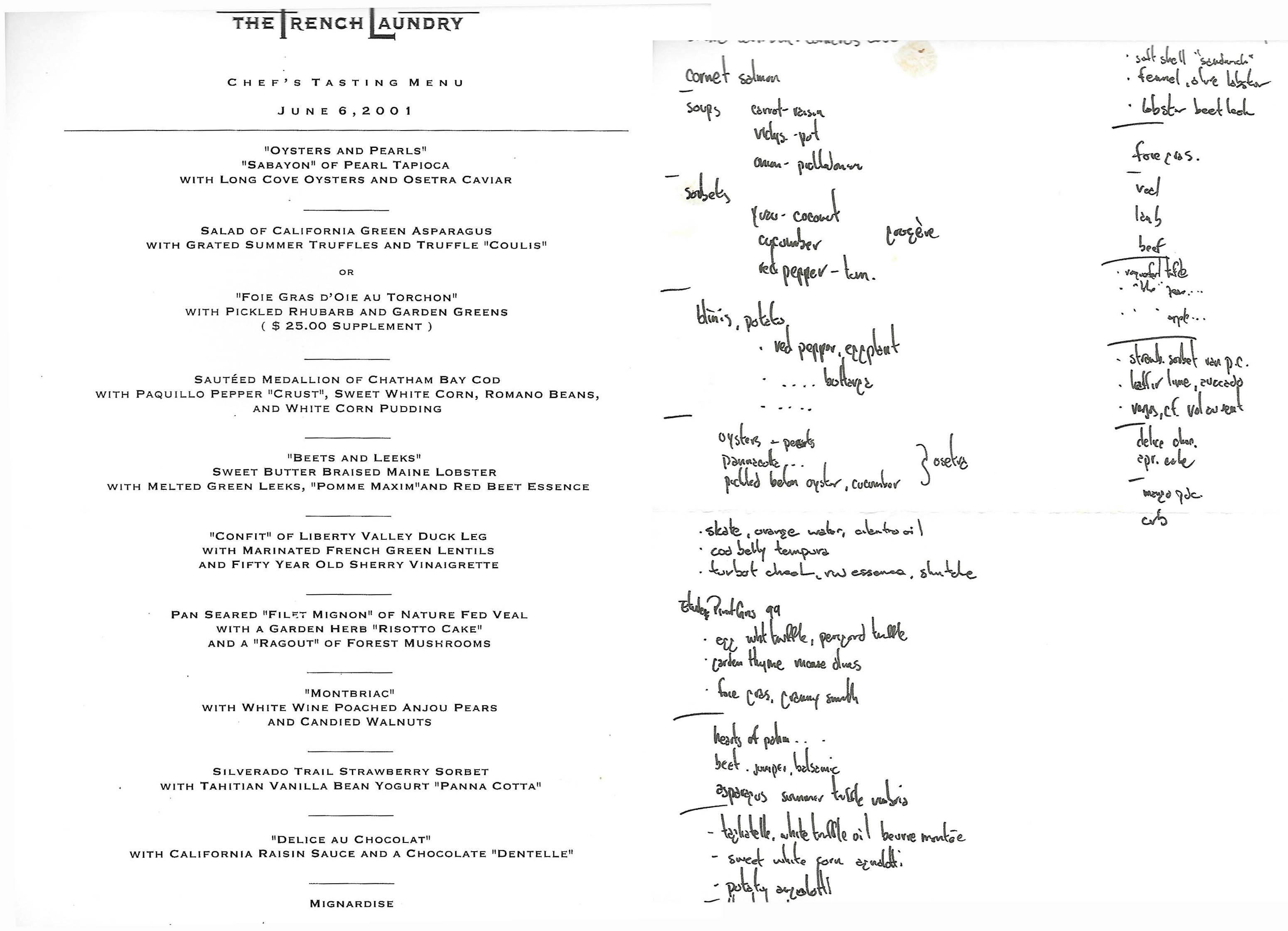 Anticipation is an often overlooked aspect of a meal. Spontaneity and the element of surprise are important, but there are also those dinners that are planned well in advance. A great many of us plan whole trips around a visit to one grand temple of cuisine or another. Such a pilgrimage is usually weighed with unreasonably high expectations, but exceeding those expectations is what such restaurants do best. This meal totaled forty-six dishes over seventeen courses; it’s rather difficult to single out this dish or that. This menu represents an immersive experience taken as a whole, relinquishing all control to a chef, if only for a few hours. Pictured, that evening’s tasting menu, and my notes documenting all of the extra, off-the-menu courses. 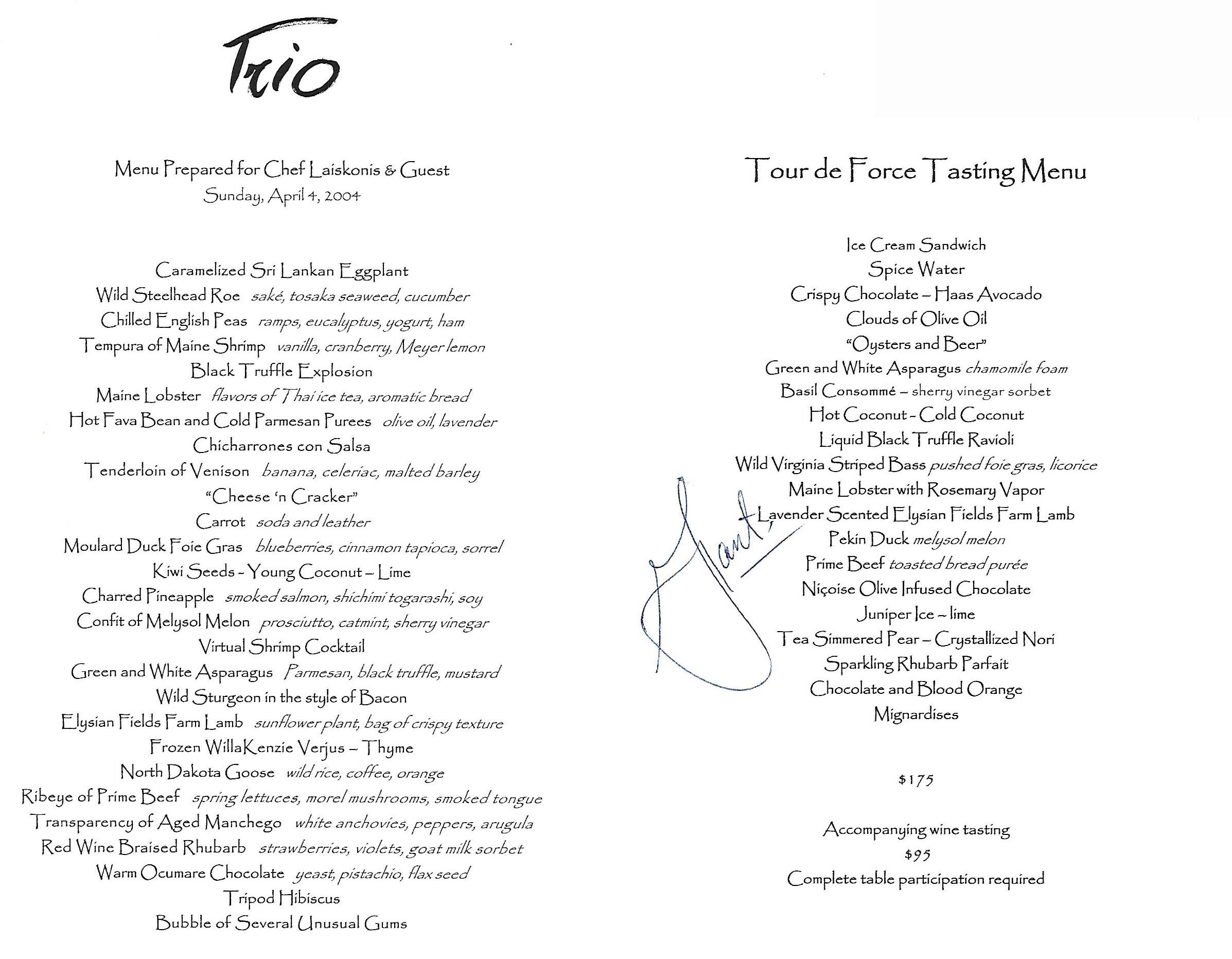 Before the groundbreaking Alinea, there was Trio, where Grant Achatz began gaining attention and defining his brand of modern cooking. These early “Tour de Force” menus contain several now-iconic dishes or concepts. After each dinner, my head was spinning, and I couldn’t wait to get back into the kitchen, inspired to work on new ideas of my own. 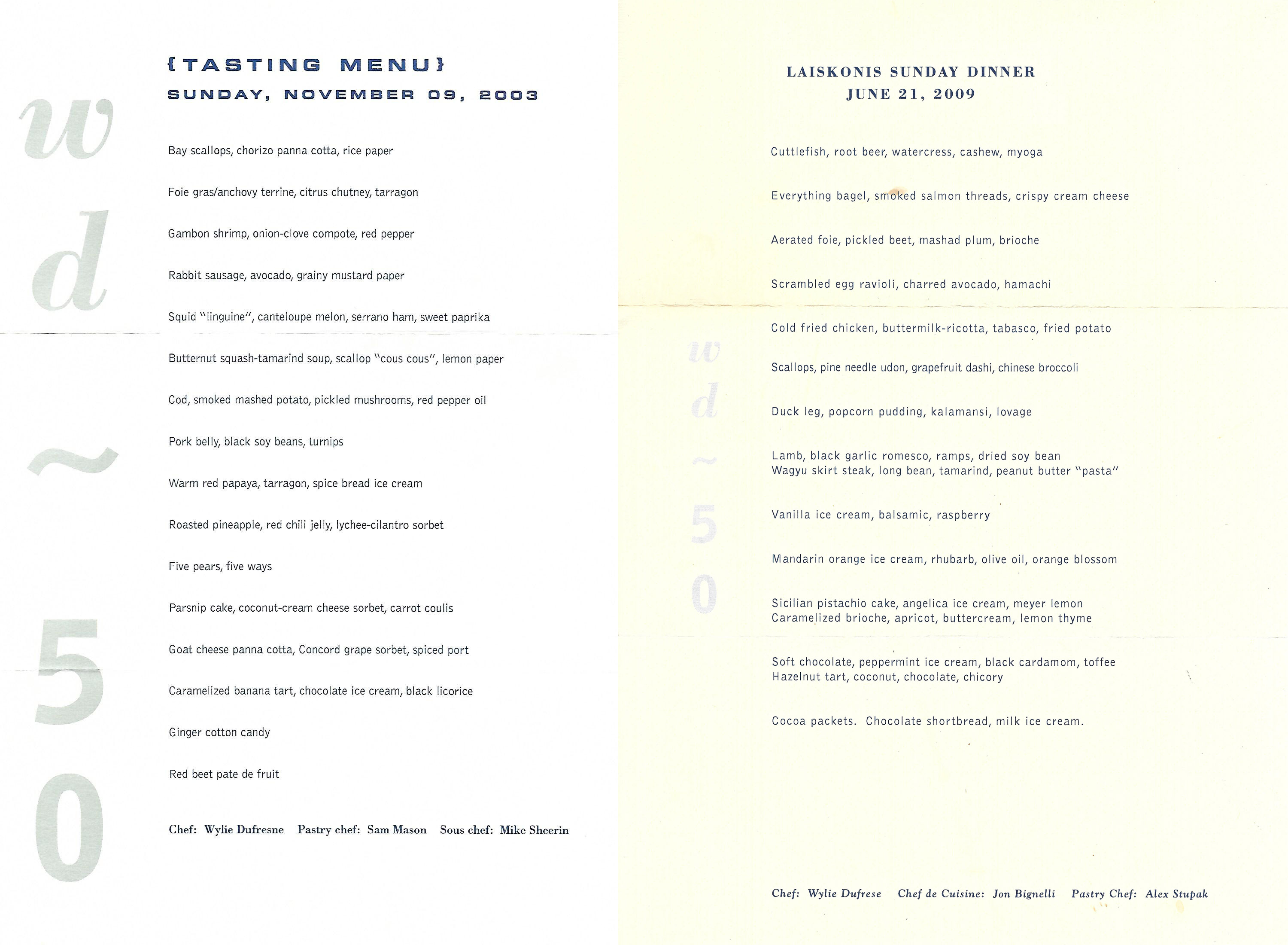 After a ten-year run, and many meals at Wylie Dufresne’s Lower East Side landmark, I was saddened to hear of wd~50’s closing. Wylie’s cooking is one of the most inspiring examples of chefs merging science, creativity and nostalgia. Few chefs actually invent new techniques, but Wylie surely has, and his influence has shaped many chefs’ mindsets, both in New York and abroad. Pictured, a menu from the restaurant’s early days in 2003 and later in 2009, respectively; one can also see the influence of pastry chefs Sam Mason and Alex Stupak. 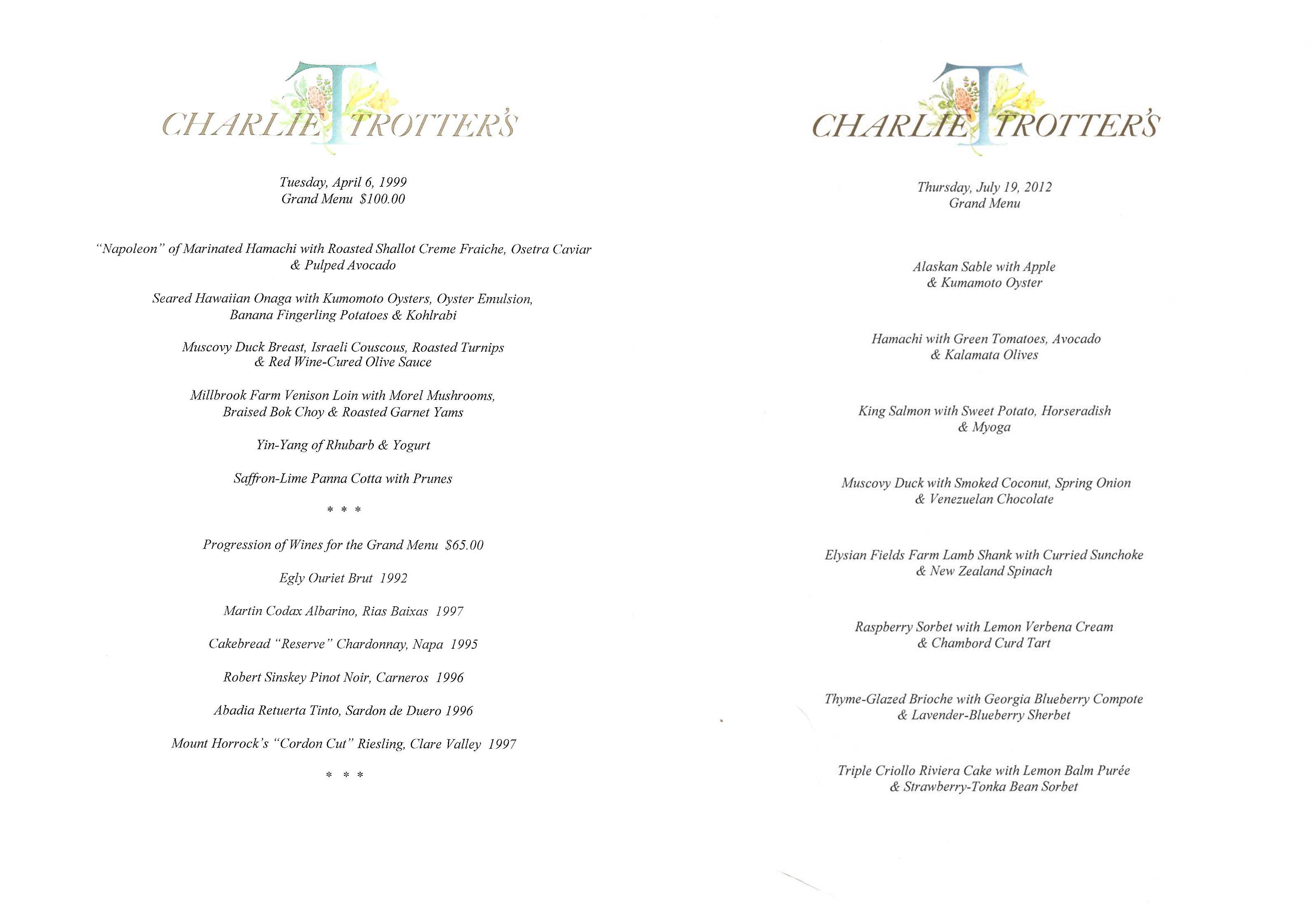 It’s hard to overstate the watershed moment that was 1994, with the arrival of the first cookbook by Charlie Trotter. I was just starting my first restaurant job and in the wake of that book, my whole viewpoint of our tiny kitchen suddenly shifted. I finally made my pilgrimage to Charlie Trotter’s in 1999—and promptly realized that books were no substitute for sitting in that chair and taking in the eight-course tasting menu.

It was, in a deeply personal way, a life-affirming experience, justifying my decision to become a chef. I found myself back at the restaurant, just one month before it closed in 2012, for a bittersweet last meal. I’m lucky to have cooked with Charlie a few times as I progressed through my career. It was his vision of refinement that pushed me twenty years ago, and it’s something I continue to chase to this day.

Two special menus bookend my eight-year run as pastry chef at Le Bernardin. I still have a copy of the menu from my first day of work—before I made any mark of my own. The menu above, from my last day, bears inscriptions from the dozens of cooks and waiters as a sendoff. In between, I would see countless dishes come and go. I never sat in the dining room during my tenure, but since leaving four years ago, I return every chance I get! Interested in learning more about the restaurant industry? Click here to learn more about ICE's career training programs.

5 Food Activities to Get You through January in NYC