As the Dean of ICE's School of Business & Management Studies, Steve Zagor oversees one of the most innovative culinary business programs in the country. He has mentored countless alumni—from Jim Nawn of Agricola Eatery to Jason Soloway of Wallflower, Mark Sy of Vien to Christina Ha of MacaronParlour. In fact, those four students-turned-entrepreneurs hail from just one of Steve’s graduating classes. Multiply their success by his 10+ years as a teacher (not to mention his lengthy career as a restaurateur and consultant) and you’ll get a ballpark idea of Steve’s undeniable impact on today's culinary industry. 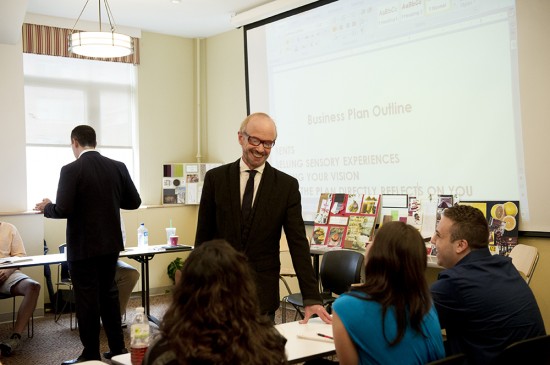 Growing up in New York City, Steve’s parents were friends with a number of successful restaurateurs, most notably the owners of historic speakeasy the 21 Club. So after his undergraduate studies at Tulane, it was no surprise to Steve’s friends and family when he chose to pursue a Master’s degree at Cornell's renowned hotel school, with the intention of one day returning to the New York restaurant scene.

Yet after a three-year stint at Marriott Hotels, which "taught him how to make money" in the business, Steve bypassed New York for a more ambitious project in the American south, opening the 300-seat “New York Café” in Houston, Texas.

At the mere age of 26, this first entrepreneurial venture was a home run. Not only was Steve a local hero, but he was also written up as the "hippest lunch spot in Texas" in Rolling Stone. His business expanded to a small restaurant empire, including “the best deli in Texas”, a cafe with singing waiters and a huge off-premises catering service. But in the ninth year of the New York Café’s ten-year lease, Steve's landlord announced he wanted to build a high-rise on the property.

Finding the opportunity in this unexpected turn of events—an essential skill he teaches our Culinary Management students—Steve sold his business to pursue work in corporate food & beverage consulting. That is, until he met the "crazy brilliant, genius IQ" Shelley Fireman of The Fireman Group.

Steve couldn’t resist Fireman's offer to oversee management at Midtown’s trendy Trattoria del Arte, boasting 170 employees and an unbeatable celebrity clientele. Steve describes the work as so engaging that he barely cared about the grueling hours. But after three years at one of New York’s top Italian restaurants, Steve was itching to try his hand at something new and lay his stakes on a restaurant in Greenwich, CT.

Yet unlike his "home run" in Houston, the Greenwich restaurant was a challenge from the get-go. Opened during one of the snowiest winters in New England history, the restaurant had too many investors and not enough success to sustain the venture.

Today, Steve credits this failure as much as his success in his formation as a teacher. "Your life is how you handle the bad times," he says, and having instructors who have weathered such failures is of inherent value to any business education. 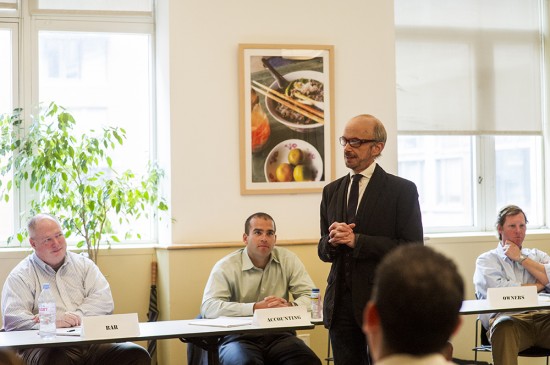 Steve returned to consulting and began teaching at New York University. In 2001, he joined the faculty of ICE’s Culinary Management program and was named program director later that year. A charismatic lecturer himself—known for the occasional magic trick and his stand-up comedy style—Steve knew he wanted to diversity our students' experience.

Since then, he regularly taps into his wide network of contacts to invite successful culinary entrepreneurs to speak with our students or integrate field trips into the curriculum, expanding both the diversity of our students’ educational experience and their access to networking opportunities.

Today, Steve maintains an active consulting practice—as do all ICE management instructors In his long list of clients, he has worked with everyone from Federal Express to Universal Studios, Paul Newman to the Time Warner Center in New York City, and is frequently quoted as an industry expert in the media.

This year, Steve and his Culinary Management colleagues have also added a new consulting division to ICE's roster of services—offering clients the combined expertise of our top-notch faculty, while simultaneously providing students with a first-hand opportunity to work on the next generation of culinary businesses. Despite all his success, what is perhaps most impressive about Steve is the endless hours he spends mentoring our students and alumni.

His sage advice always comes with a side of salty humor, generating an enviable list of witty one-liners that sum up his wealth of wisdom and experience. With his deep connections to the industry and New York as his classroom, it's safe to say that a day in Steve's class is unlike any other.