Fresh off her most recent nomination for a James Beard Award, Suzanne Goin – celebrated chef, restaurateur and cookbook author – charmed and informed our students and industry attendees as the latest guest in ICE's ongoing series, Meet the Culinary Entrepreneurs. 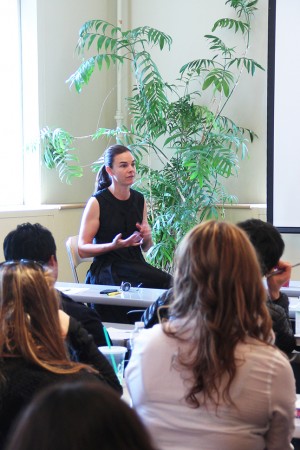 The featured speakers are noted foodservice business leaders from all corners of the industry – winemakers, bakers, chefs, distillers, restaurateurs, bar owners, cheesemongers and more – who are invited to share their backgrounds, successes and advice for aspiring entrepreneurs. While every guest brings a unique and inspiring tale to tell, because of my own French culinary background, I was particularly excited to moderate this discussion with Suzanne, and the two hours did not disappoint.

Goin began by sharing how an early interest in cooking began the foundation for her career in the food industry. That curiosity led her to some extraordinary places, first among them an internship at the legendary Ma Maison (called by Zagat one of "13 restaurants that changed LA dining forever") while still attending High School in Los Angeles.

After heading east for undergraduate studies at Brown University, Goin resumed her career in restaurants by working at such famed establishments as Chez Panisse, owned by the legendary chef Alice Waters in Berkeley, California, and Olives, the first restaurant by chef Todd English, in Boston. Her next step was France, where she worked at restaurants of equal or even greater acclaim, including Alain Passard's three Michelin-starred restaurant, L’Arpège. Suzanne eventually made her way back to Los Angeles where she worked her way up to executive chef at Mark Peel's critically acclaimed restaurant, Campanile. Quite a résumé, for a young chef!

After establishing a strong skill set in the world's top kitchens, Goin felt ready to open a place of her own. When asked how she knew it was the right moment, she recalled that it was just a gut feeling; something she felt driven to do at the time. In 1998, Lucques was born – the first of several restaurants she has opened with her business partner Caroline Styne. Serving French and Mediterranean-influenced California cuisine, the inviting, rustic restaurant was an immediate success. Goin was named one of the "Best New Chefs" by Food & Wine Magazine the following year.

Goin shared the ups and downs of opening her first restaurant, in particular, stressing the importance of the location and setting. “Find a space with soul,” she advised. With renewed confidence and experience under her belt, Goin's second restaurant, a.o.c., debuted in 2002 and was quickly celebrated by the critics.

The concept featured small plates (then, a cutting-edge concept) with superior wines by the glass. Today, Goin owns and operates several restaurants, as well as casual marketplace dining concepts, and says there is more to come. Among her top lessons she learned along the way: be wary of unnecessary start-up expenses, exemplified by the beautiful but far-too-expensive tufted banquettes she installed at one location. (Goin confided that, while lovely to look at, they took a very long time to pay for!)

In addition to offering practical advice about operating and expanding business ventures, Goin stressed the importance of a good working relationship with any partner — mutual respect, communication and clear delineation of duties are key. She also passed on many of her thoughts about staff management, recounting several anecdotes of nurturing and motivating employees. Obviously having a great deal of respect for her staff, she commented that all business owners “owe [their employees] some mentorship.” Goin was full of wisdom, offering great insights into starting and operating a successful business. But perhaps, as one of my students commented, the best part of the event was to meet a celebrated restaurateur and chef that was also unusually genuine and sincere. Beyond her talent in the kitchen, her attitude is yet another great reason to pay Chef Goin a visit on your next trip to L.A.!