ICE’s Culinary Management program hosts a one-of-a-kind series of lectures called Meet the Culinary Entrepreneurs, during which a wide range of successful culinary business leaders and luminaries share their expertise with students and guests. On May 19, Union Square Hospitality Group’s President of the Core Restaurant Division Paul Bolles-Beaven met with a packed room of students eager to hear about the growth and success of Danny Meyer’s restaurant empire. 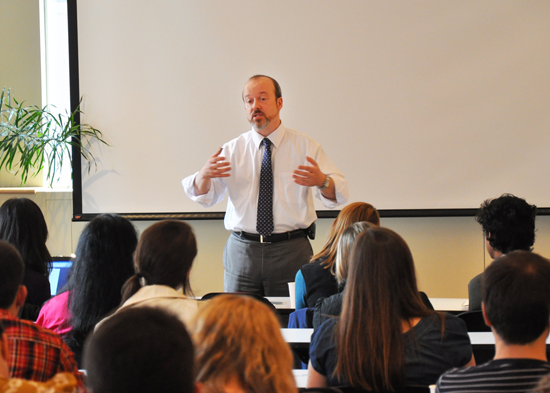 For over two decades, Bolles-Beaven has worked for Union Square Hospitality Group, whose acclaimed restaurants include Union Square Cafe, Gramercy Tavern, Shake Shack, Blue Smoke and Maialino, as well as recent James Beard Award–Winners Eleven Madison Park and The Modern. He was a founding employee of Union Square Cafe in 1985. He started as a waiter, and ultimately rose through the ranks of the organization to bartender, Bar Manager, Wine Director, Service Director, Manager, General Manager, and Managing Partner.

In 2003, when the company created a corporate office to oversee operations of their expanding businesses, Paul was promoted to Chief People Officer. In this capacity, he was responsible for recruiting, training, and motivating one of the nation's most acclaimed hospitality teams. Having been there since the beginning, Bolles-Beaven provided unique insight into the company’s growth and the challenges that came with taking what had been spontaneous and organic and making it linear policy. Bolles-Beaven noted their work was often like jazz, with employees improvises and riffing off of each other, but that as the company grew and the number of restaurants expanded, they had to make things more explicit and replicable.

Part of the process was naming and describing their culture. Union Square Hospitality developed and delineated a culture of “enlightened hospitality,” where providing good service was beneficial to both the staff and the customers and there is mutual care and respect among all employees. He said that he always wants his employees to continue to have some sense of “jazz” about what they are doing — they should be excited and eager to come to work and feel free to be themselves. He said, “There have been moments where I wondered if I should leave, but they usually only last two to three hours.” ICE President Rick Smilow sat in on much of the lecture and he commented that “Paul is a key reason Union Square Hospitality Group has grown so successfully, so it was clear to me that I too could learn by listening.” Smilow noted that Bolles-Beaven had a great sense of humor and delivery style.

One of his favorite lines was when Bolles-Beaven dryly stated, “One of the biggest mistakes you can make is to hire yourself. When you meet yourself in an interview, it feels good, you like them. But if you only hire people like yourself, pretty soon your operation won't have the diversity of thought and style that is best for success.” Union Square Hospitality Group’s effort to create this positive employee culture has been a key contributor to their success establishing superior customer service.

In fact, the company was receiving so many requests from all kinds of business wanting to better understand the fine art of hospitality that they started HQ, a new branch of the empire, to specifically help companies train their employees. Bolles-Beaven described hospitality as how you treat people and creating the feeling that “you are on their side.” He made a point of explaining that “the person on the receiving end has to feel that it has occurred and you can never assume what the customer wants.”  Bolles-Beaven shared that creating a positive, caring work environment was the first step in creating a caring, hospitable environment for the guests — important lessons for ICE students as they set out on their own career path.