Yesterday, as part of our Meet the Culinary Entrepreneur series, we were lucky enough to have President & CE-Yo of Stonyfield Farm, Gary Hirshberg come speak with students and guests about his experience heading a company that is not only one of the country’s top yogurt producers, but also paves the way for sustainable agriculture and development.

Hirshberg is the author of Stirring It Up: How to Make Money and Save the World. He started as the director of the Rural Education Center, a small organic farming school. When their government funding was cut in the early ‘80s, Hirshberg decided it was time to sell some of the products they were making on the farm. In 1983, he created Stonyfield as a seven-cow farming school selling yogurt to a few select retailers in the nearby area. 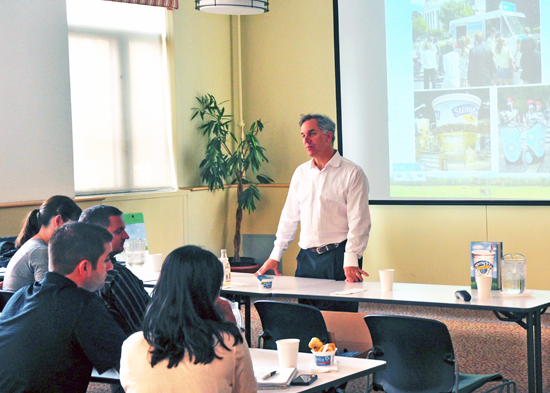 Now, the company has $330 million in annual sales and has had a compound annual growth rate of over 24% for more than 18 years. Not only has the company found great success, Hirshberg has remained dedicated to environmental causes. Hirshberg was featured in the 2009 film, Food, Inc., discussing the growth of the organic food industry. Yesterday,he said, “I set up to create a business where everybody wins — the cows, the farmers, the employees, the customers and the stockholders could win.” Hirshberg felt that the key to Stonyfield’s success has been a high-quality, delicious yogurt that wins customer loyalty.

Rather than spend money on extensive advertising, Stonyfield has used creative marketing techniques such as handing out yogurt to Chicago train riders to “salute their commute,” hoping that once customers have tasted the yogurt, they will come back for more. Stonyfield’s customers are now very engaged with the company. In fact, you can even adopt a cow and get regular “moos-letters” from the farm through their Have-a-Cow Program. Stonyfield has been so successful that Hirshberg is working on a chain of Stonyfield Cafés, where customers can get healthy, organic food on the go. He said, “Being an Entrepreneur is addictive. I just want to keep on going.”

ICE's Meet the Culinary Entrepreneurs is a one-of-a-kind, year-round series of lectures, during which a wide range of successful culinary business leaders and luminaries share their expertise with students and guests. To see upcoming speakers, check out the schedule of career development classes.