Today, it’s nearly impossible to remember a time before food media stars and celebrity chefs. But, in fact, many of the most respected restaurant industry pioneers grew up knowing that their parents and friends looked down on their career choice. Such was the case for Brian Buckley, ICE’s first Culinary Management instructor. 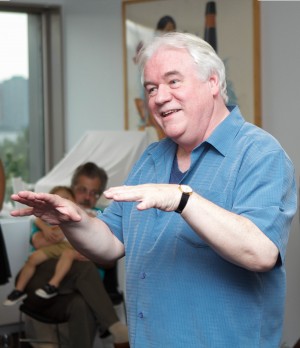 After more than 35 years in the industry, Brian has seen it all—and he’s having the last laugh.

“After college, I tried working a normal job writing advertising copy, but after a year, a friend told me about a really good bartending gig. I realized I could make way more money doing something I liked! My parents were totally freaked out and begged me to go to law school, but I was smart enough to see that there was a real possibility to make a name for myself in the restaurant business.”

To structure his culinary education, Brian strategically worked a wide range of positions in every kind of food establishment imaginable—from three-star Michelin restaurants to dive bars. “It was a real awakening because I saw different aspects of the industry, and I learned a lot about the people management side of the industry.”

Then, about 10 years into his career, Brian decided to advance his skills by enrolling in the culinary arts career program at ICE (then known as Peter Kump’s New York Cooking School).

“After 10 years in the business, I thought I knew everything,” Brian explains, “but ICE made me aware of so many more aspects of the industry—it kicked my butt.” The experience also stoked Brian’s entrepreneurial fire, and he started researching possibilities for an Italian steakhouse concept. At the same time, Brian’s network of contacts started reaching out with various consulting opportunities.

Brian credits his ICE diploma as the primary driver behind this unexpected consulting business. From developing a series of chicken recipes to establishing strategies for staff training, there was nothing he wasn’t recruited to do. “After about the third or fourth consulting gig, people starting telling me I was good at it. So I printed up some business cards and, 25 years later, I’m still consulting for a living.”

As a consultant, Brian has worked with everyone from California cuisine innovator Wolfgang Puck to the Food Network, Kitchen Arts & Letters, Cook’s Illustrated and even a wildly successful New York City Penn Station bar and grill called “Tracks.” “I’ve done every job in hospitality except valet parking,” jokes Brian. “If I saw that I could learn something new, I took the job.”

Watch Brian report in as an expert on breaking food safety news on CBS:

That diverse range of experience made Brian the ideal candidate for teaching, which is how he became the first instructor in ICE’s Culinary Management program. Sixteen years into teaching, the program has an incredible roster of alumni, including successful restaurateurs, specialty food retailers and food marketing professionals. “It’s such a positive experience to work at ICE, and I love the students,” Brian notes.

“For someone like me who has an insatiable appetite for learning, the ability to walk down the hall and see Michael Laiskonis working on chocolate or to have Chef Chris Gesualdi say, ‘Here, taste this sauce…’—that’s the dream.”

Brian’s advice for his students is to take the long view: “Your first project may not be your dream project, but it may help you establish your reputation or raise financing. You never know where this career will take you, so intentionally learn things you don’t need for your current job. With the nature of this business, there’s no skill that you won’t use at some point.”