The central Ohio native is taking on Columbus, Ohio’s burgeoning culinary scene, one pizza at a time.

Following a recipe isn’t necessarily a direct route for success, in Matt Alter’s (Culinary/Management, ‘12) view. The executive chef of Natalie’s Coal-Fired Pizza and Live Music near Columbus, Ohio, likes to experiment, often for many hours and with a basket full of ingredients, before he gets something right.

“There’s no perfect dish,” says the 30-year-old chef. “There’s no recipe out there I’ve seen that you cook and it’s perfect. You take it, tear it down and reinvent it. I once made chicken piccata, and when I plated it, I thought it was perfect. I thought, damn, this is really good. But what did I do? I tweaked it until it tasted that good.”

Matt’s rise to become a respected, young chef in Columbus’ blossoming culinary scene hasn’t been a step-by-step process, either. It’s been a pinch of this, a dash of that, peppered by the time he spent earning a dual diploma at ICE’s New York campus.

At Natalie’s, one of the hottest spots for live music in central Ohio, Matt has created a focused, inventive menu that feeds an early-dinner crowd as well as concertgoers looking for more sustenance than cold beer.

Natalie’s is in the suburb of Worthington and includes a downstairs speakeasy called The Light of Seven Matchsticks. Matt has designed a small-plates menu for the speakeasy with upgraded interpretations of bar cuisine. This includes Korean-style barbecue ribs that co-owner Natalie Jackson calls “the most flavorful thing I’ve ever had.”

“What sets Matt apart is he’s not trying to cut corners,” says Natalie, who grew up in nearby Circleville, Ohio, and operates the restaurant with her dad, Charlie. “If it takes him all day to make something, he’s going to do that. “That’s something we bonded over early on. He’s constantly exploring how other people are doing things. When he travels, he’s sending pictures of food. In this business, it’s always on your mind.”

Matt’s inclination to prepare flavorful dishes with all that effort stretches back to younger days in Granville, Ohio, a quiet college town 30 miles east of Columbus. It’s where Matt would take note as his Austrian grandmother, Herta White, prepared comfort food such as chicken paprikash and full-flavored desserts.

“My grandmother was very strong and independent,” Matt says. “She worked in clothing stores, and she'd run after people with a shoe who were stealing from her. She had to support her family, and she was definitely strong and stubborn.”

Grandma White’s influence rubbed off on young Matt. He would cook food with his friends, once trying to replicate the spicy chicken sandwich from Wendy’s. Another time, he and grade school friend Ian Carroll found a duck breast in the refrigerator and tried to prepare it.

“We almost burned down the house,” he admits.

After enrolling at West Virginia University for a short time, Matt gave up that gig and backpacked around Europe with a friend. He quickly became enamored with the restaurants in England, France, Germany, the Netherlands and the Czech Republic. “It stoked my passion for food, going to places like Italy and eating bread, drinking wine. I always wanted to cook.”

His parents were supportive, so in 2011, Matt enrolled in the Culinary Arts and Restaurant & Culinary Management programs at ICE. Immediately, he knew he was in the right place.

“I fell in love with cooking at ICE,” Matt says. “It was a joy coming to class. I felt I was ahead of the curve in my classes. I could visualize what the chefs did in demonstrations and just did it. I learned how to delegate and become a leader, and getting respect in this industry is difficult. The management classes helped with interacting with people.”

Before settling into his role at Natalie’s, Matt took an externship with Chef Michael Berardino at The Cannibal, a cultivated destination for meat and beer, with a sister restaurant, Resto, next door. The Cannibal is a nose-to-tail butcher shop, too, so there was a lot to learn for a young chef.

“I learned to respect the meat, first of all,” he says. “I would peel parsley stems all day and pulverize fresh garlic with the back of my knife.”

Matt later spent time at an Asian restaurant and as executive chef at an Irish pub before taking a deep breath. He had honed his skills and learned professionalism in the kitchen, but he realized he wasn’t as intense as some of the New York chefs he worked around. “I’m definitely more mellow.”

He looked homeward and headed back to central Ohio. While helping a friend with a Korean taco truck concept, Matt saw an ad on Craigslist for a chef at Natalie’s. He admits he didn’t know much about the Columbus food scene, but he always loved seeing live bands. Matt went to Natalie’s for an interview and quickly bonded with her.

“Can you work tonight?” she asked. It took a few days longer, but the ultimate answer was yes.

“I liked the change of pace — and the pizza,” Matt says. “The rest is history.”

His first day on the job was “deep-cleaning day,” and Matt quickly found out that the fast-paced scene he left in New York would be replicated with Natalie’s boundless work ethic. It figures. Natalie also spent time in the Big Apple, promoting musical acts at bars, before returning to Ohio to open Natalie’s with her dad, Charlie.

“Natalie and Charlie Jackson are extremely kind people, and they have high standards. Natalie supports all areas — there’s no job that’s too beneath her,” Matt says. “I’m the same way. I still mop the floors.”

Matt’s menu makes use of his penchant for full-flavored dishes. It’s a tight selection, consisting of a few standbys, such as his well-liked gumbo, smoked trout dip and a huge meatball appetizer. The speakeasy has the Korean ribs, charcuterie boards and duck fat-flavored popcorn enhanced with Grana Padano and truffle butter, a nod to his failed, youthful experiment cooking duck. 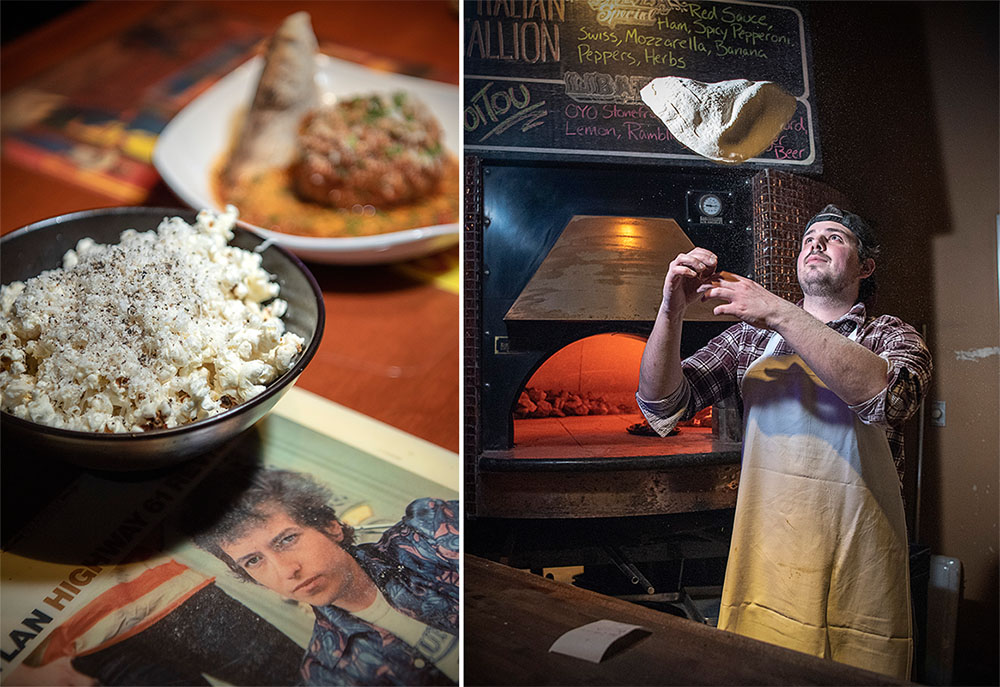 Then there’s the pizza. Natalie’s uses an Earthstone oven fired by anthracite coal that can reach up to 1,000 degrees.

The restaurant turns out a selection of New York-style pizzas using fresh ingredients. The key to the pies is a sourdough starter that stretches back more than 100 years. Natalie says the starter came from a pancake house “out West” via a brother of her dad’s friend. Charlie Jackson’s buddy worked at Battelle Memorial Institute, the giant research lab in Columbus.

“One time when the starter died, I met him in a Battelle parking lot, and he gave me more — wrapped in a brown paper bag,” she divulges.

Matt’s presence likely could be seen more soon. The Jacksons are making plans to take over a former sports bar in a neighboring suburb, and the expansion is fluid. In the meantime, Natalie says she’s confident in Matt’s skills.

“Matt has total creative freedom. When you’ve worked as long as we have together, there’s that trust element. I know what his standards are, and he’s not going to present something not worthy of being on the menu.”

That kind of respect is important in a live-music venue, where employees often come from different walks of life. Some don’t view the restaurant industry as a career, or they might want a short-term gig. Others could be less passionate than those whose long-term livelihood is in the restaurant business.

Matt says his culinary education prepared him for the challenge.

“If you take what you’re doing seriously, your expectation of yourself should trickle down to your employees,” he says. “I tried to learn discipline over the years, and you must judge each individual's personality. People respond to criticism differently. You have to listen to people and appreciate their values.”

Turn your values into a career with ICE’s Culinary Arts program.