ICE is proud of its alumni and their accomplishments. From four-star restaurants to food media, and test kitchens to personal chef positions, our alumni continue to succeed and win awards, accolades and attention for their endeavors. ICE alumni are finding success in a plethora of avenues in the food world. Check out just some of the alumni making recent headlines. 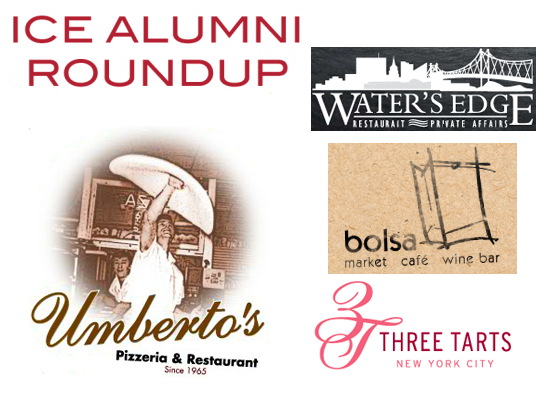 Michal Shelkowitz (Pastry, ’05) of Dovetail was nominated by Food & Wine for its People's Best New Pastry Chef award. You can vote for her online.

Gaetano Cortes (Management, ’09) delivered over a dozen pizzas from his Long Island pizzeria, Umberto's, to Indianapolis for the Super Bowl – winners, the New York Giants! Gaetano and the pizzas were featured in New York Post, Wall Street Journal and Fox 5.

Joncarl Lachman (Culinary,’02) is happy to report that his first restaurant, HB Home Bistro, is included in the Michelin Guide’s group of recommended restaurants.

Jeff Harris (Culinary, ’05) and his Dallas restaurant, Bolsa, was featured in an interview on the Dallas Observer.

Sara Dima (Culinary, ’04) was mentioned in The New York Times' Diner's Journal, along with chef Ilene Rosen, for 606 R & D, a home-style restaurant and bar they are opening in Prospect Heights, Brooklyn.

To connect with these ICE alumni and many more, you can connect with Career Services on Facebook or LinkedIn.