One of ICE’s celebrated alumni, Marc Murphy, is lighting up the New York City dining scene with a new restaurant, Kingside in the Viceroy Hotel on West 57th Street.

Murphy says of the unique feel and location, "It’s a restaurant located in a hotel, but we’ve created a space that has a downtown vibe and a really great neighborhood feel.” 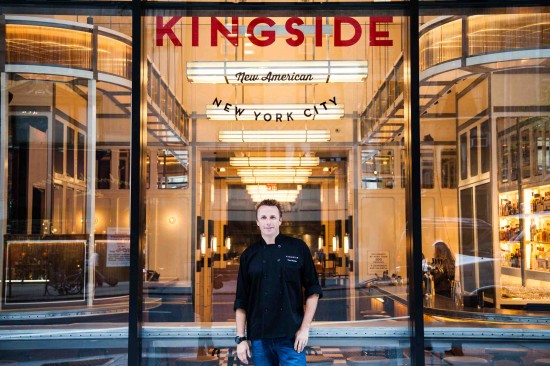 On the day we visited, Murphy himself was working the Chef’s Counter. It’s a large area in the center of the restaurant where guests can watch the chefs in action. That night, diners watched Murphy churn out unique combinations, like hay-aged pecorino, ricotta, and truffle honey toast.

The chef says the cuisine is his take on New American: “I wanted to curate a menu that would take guests on a trip around the world and bring them back to America with simple dishes and big flavors.” One of the dishes he thinks will be of particular interest to culinary students and customers alike is his Roast Chicken for Two, explaining that his version of this French classic is based on simple flavors that are “absolutely delicious.” He encourages students to take classic dishes like this and put their own twist on them.

Speaking of twists, Kingside is a twist of sorts for Murphy. It’s his first new restaurant in five years, and remarkably different from Landmarc and Ditch Plains. "As a Chef, you want to continue to be inspired, and the idea of creating something new was appealing to me”.

The name of Murphy's new restaurant venture is creative in its own right. Murphy says the name "Kingside" was inspired by the room's floor design: "It looks like a chessboard, and when we were thinking of names, Kingside was a term where both kings are on the same side. Since this is Scott Gerber (his partner) and my first project together, we thought it worked perfectly!”

From appetizers all the way to dessert, you can tell Kingside is a project Murphy has approached with both skill and passion. We wish him huge success!