The first thing you notice about Culinary Arts alum Greta Anthony is that nothing stands in the way of her professionalism. 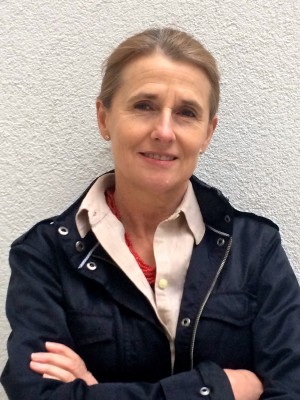 Not giving an interview on a noisy street corner when her office is too busy. Not even keeping the appointment for said interview in the wake of winning her fourth (and second consecutive!) James Beard Award for the production of Martha Stewart’s Cooking School. Which is to say that you can understand how Greta Anthony managed to not only become the first culinary intern ever hired at Martha Stewart, but also how she transformed that opportunity into an incredibly successful career in food television production. Yet before Greta became an uber-producer for one of the world’s most impressive media brands, she was a career changer looking to reinvent herself at ICE. “I was working in the jewelry industry with no prior culinary experience. I knew I didn’t want to work in a restaurant, but I did know that I wanted to work in food, and was confident I would figure out the details at school.” In fact, it was through ICE’s externship program that Greta found the opportunity at Martha Stewart. At the end of her externship, Greta was offered a freelance position at the company. Soon enough, she had landed a full-time job and has since been with the company for nearly 20 years.

At first, I was in the test kitchen, but then I was given an opportunity to work on Martha’s show, which was shot at her house in Connecticut. As the show’s popularity expanded, it became clear that I had to make a choice between cooking and production, so I decided to pursue the latter, even though I had no prior TV experience. I really learned on the job—and I’ve continued learning on the job—as the show transformed from a once a week, half hour show shot on a closed set to a daily, one hour show filmed live in New York City with a studio audience!” In addition to learning the ropes in television production, Greta had to become intimately familiar with the Martha Stewart brand: “One of the benefits of working with such a widely recognized personality is that people are thrilled to be asked to come on Martha’s show. Guests have often said, ‘Cooking with Martha was a dream come true.’ But we also have a standard to live up to that’s very specific. Staying ‘on brand’ means quite a bit, as Martha is known for a very particular level of taste.”

Maintaining that brand standard in an evolving market hasn’t always been easy. Over the past twenty years, food media has changed significantly—both in terms of format and the audience: “I feel like my generation was exposed to home cooking, which gave them a solid base to expand upon. These days, that is not necessarily the case. We can’t assume everyone knows the basics (such as the technique for scrambling an egg), so our job is to teach them. Martha has always considered herself a teacher, and our mission in each segment we shoot is to teach and empower our audience in the kitchen.” Developing content for a new generation of home cooks has proven to be another exciting opportunity in Greta’s ever-evolving career. “Every day is different, and I love the variety of it. We’re always making something new or figuring out a new way to revisit a classic. What stays the same, however, is that you need to be a team player because very few things come together with just your insight or input. It involves a lot of people to arrive at the end product.” In that sense, Greta’s role is not all that different from an Executive Chef in a restaurant. Her ability to bring the entire team’s talents together is the “secret sauce” that ultimately leads to rave reviews—including four James Beard Awards and eight Emmys. As for the training she received at ICE, Greta enthusiastically notes: “The best thing I ever did was to go to culinary school…and it obviously has worked out well for me.”

Click here to learn more about careers in food media.