Hurricane Irene may have been a bust for me, but its impact on the food industry wasn’t for me. 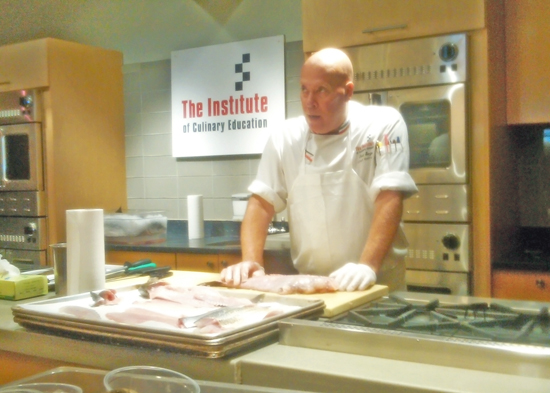 Friday was spent trying to prepare for the worst — from talking with others to try to figure out whether to close and what time to close, to figuring out what will happen on Monday if the power goes down over the weekend. We closely tuned into the news and weather reports to figure out when the storm was going to hit and employees were asked about how the closing of the MTA would affect their ability to get to work. I stayed later than usual at Smith Canteen on Friday in order to prepare for a shorter day on Saturday and got in earlier the next morning. I was in and out in just a few short hours and worried for the next two days about what would happen if the freezer broke.

When I polled my other food friends, I learned that some volunteered to stay overnight in hotels in order to make sure the hotel guests were able to order room service during the storm. Many worried about how they would be able to get to work in time for their early morning shift if the subways were still down. I heard stories about how despite the early morning chaos and the great sales in the beginning of the day on Saturday did not make up for the loss in sales for Saturday night dinner and Sunday brunch. The truth is, even though everyone has to eat, the food industry is very much impacted by what goes on outside. Before the madness of the storm, we met with Chef Ted to get a chef’s perspective on food costs in early August.

He broke down beef and fish in order to give us a visual perspective of what types of portions come out of them and we used those portions to calculate food cost. It was fascinating watching him break down parts of beef to get a sense of what comes out of each section, but even more so to see how much gets trimmed away and how to use those trimmings so they’re not a loss. Finally, I understood why a steak is so expensive. In our Restaurant Management class, we did profit and loss statements and balance sheets. I’ve been doing these for Macaron Parlour since opening, but in class, we got a list of benchmarks we should aim to hit. We are right on the money on most of them, but not as close as I would like on some.

Now that I have an idea of where we should be, it’s time to make a few adjustments! It’s really interesting to see on paper why rent has to be 10% of total sales or less and to realize how small the profit margin in the food industry really is. In fact, those small margins are why so many restaurants fail. We also had the opportunity to chat with Talia Berman, a manager from Union Square Cafe. She sat in a few of our classes and then spent a day answering our questions about the Danny Meyer way of life. My class bombarded her with many questions about culture. Talia spoke about how her training involved several weeks of staging in different parts of the restaurant, from spending a week in the kitchen to running food to working the hostess stand. Working in the different areas helped her understand how the restaurant works and to build confidence in the other employees that each manager knows how each job works. She also provided great insight into how to work with her employees to reach a specific outcome — one that involves using teamwork rather than blame.

Truthfully, I have had a copy of Setting the Table sitting on my bedside for about two months, but after meeting her and Paul Bolles-Beavens, I think it’s time to start reading it. We started talking about the flow of service in class and, specifically, how we want things to run at our restaurants. We talked about the difference between a four-star restaurant and a quick service place. We also wrote about one job in the restaurant and how that position impacts the guest’s experience. I looked at the fascinating position of host/hostess because he or she should be the first person you see at a restaurant. I also learned that the flow of how that person seats guests greatly impacts the flow of the kitchen. Really aggressive seating can really exhaust everyone in the back of house and on the floor, and negatively impact the dining experience by causing guests to wait longer than we would like for their food. Lastly, we had a field trip to Public to meet with Dan Rafalin.

Dan is a former student of Steve Zagor’s. He spoke about his own food background and how that led to him opening his own place. He talked about his vision, his business partners and the real challenges behind fundraising for his first place. He told us about how he would create an entire business plan around one location, but the lease wouldn’t work out and he would have to start anew with a new location. For example, Public was supposed to be at a smaller location, but it didn’t work out and they ended up with a huge raw space that they were able to turn into several different concepts in one.

Dan told us how flexible he has to be as an owner to accommodate the market. He then spoke a little about their second restaurant, Double Crown, and the challenges that came with a restaurant that opened on the day that Lehman Brothers went out of business. While they eventually decided to close Double Crown, Dan could barely contain his excitement about making the decision to turn the space into a new restaurant that better fit the recession mindset. Overall, it was amazing getting to meet one of Steve’s former students and to learn a little about the challenges he faced along his journey in the food industry. Well, August is almost done and we had an earthquake and a hurricane in a single week. It has been eventful, but I think that as we get closer to the end of our program, there is plenty more to come.