Lessons 150-The End: The End is Just the Beginning

And thus it ends! October 31 marked the last day of my Culinary Management program here at ICE. 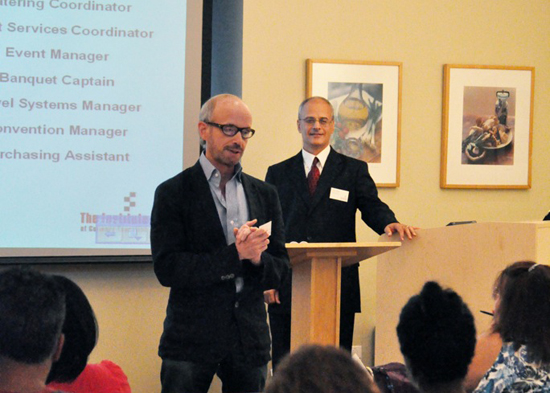 It’s hard to believe that six months have gone by so quickly! I remember how nervous I was about committing to the schedule while working a full-time job, and yet I did it. I didn’t miss a single day and it was completely worth it.

In these last few weeks, we received a lot of information to help us complete and finish our business plans and now I know that the timing was intentional. For example, if the attorney, Jack A. Gordon from Kent, Beatty & Gordon, LLP, came in to talk about his practice two months ago, we would not have known enough about our own needs for our business to ask the right questions.

Since he came two weeks before the end of the program, we could ask him detailed questions on setting up our business structure, investor contracts, leases and non-compete agreements. Recently, we also made a special field trip down to Tribeca where we met with Steve’s former student, Zach Kutshers. Zach and Jeffrey Chodorow are bringing Zach’s family restaurant — Kutsher’s Country Club, a Catskill staple that has been around for over a century — to Tribeca.

The new location is set to open within the next few weeks and we were able to talk to Zach about what he did after his program ended, how he got involved with his business partners, the build out, and everything we could possibly want to know about the place. We also got the grand tour and after seeing it, I can say that space is going to be great. The kitchen was done but the dining room was still empty. It’s amazing to imagine that in a few short weeks, the space will be full of furniture and guests.

I love that we are able to meet former students and see what they have been able to accomplish since their graduation. I hope that one day, I can share my story to a future Culinary Management class! Once we completed on in-class lessons, we presented our business plans. Each of us went before the class and presented our projects that we have been working on for the last six months. Everyone did a great job and it was amazing seeing the transformation that happened —students who had a very general idea of what their plan was on the first day became real, savvy industry insiders who spoke about locations, leases, and projected financials.

Even though I have a business that is up and running, I was still very intimidated by this project. I had nervously put parts of it off while I focused on other things. I was worried about how to put together financials in a way that made sense — what could I really project to make by selling coffee? What is the appropriate size for a bakery café? I had always imagined having a tiny place with a lot of take out because I rarely stay to hang out when I go out to a bakery, but with the information we learned in class I realized, the numbers didn’t work.

That being said, once I actually started to put together the project, I realized that during the course of the program, we had actually been writing up parts of it for class. It was a matter of taking those parts, putting it together, and making adjustments for things we have learned along the way. It was really amazing when I discovered how much I actually knew and that I was able to put it all together in a way that made sense to go forward with this business plan. After that, the presentation was a breeze. It was a very proud moment for us all to stand before our classmates and to be able to say, this is what I know, and this is what I am going to do with it.

On Halloween evening, we had our graduation. We chatted with our friends, received a copy of Danny Meyer’s Setting the Table, and went out afterwards. Many of us went to Mother’s Ruin, a place that got its start with the help of two of our classmates. While we are no longer in the classroom together, I expect to stay in touch with many of my fellow classmates. It was a wonderful celebration of everything we’ve learned and accomplished, as well as a great send-off into the industry.

As for Macaron Parlour, when people ask about our storefront, I used to answer, “We don’t have one.” Now that I've been through ICE's Culinary Management program, my new answer is, “Not yet!” I’m not sure when it’ll happen, but keep your eyes open. In the meantime, we’ll be at the Union Square Holiday Market starting in two weeks.