Life as a Hospitality Student

Rebecca Blair Roth is a student in ICE’s Hospitality Management Program. Her class is learning about the business of the travel and tourism industry. The class is frequently visited by industry experts, helping guide students on the track to culinary careers in the industry. 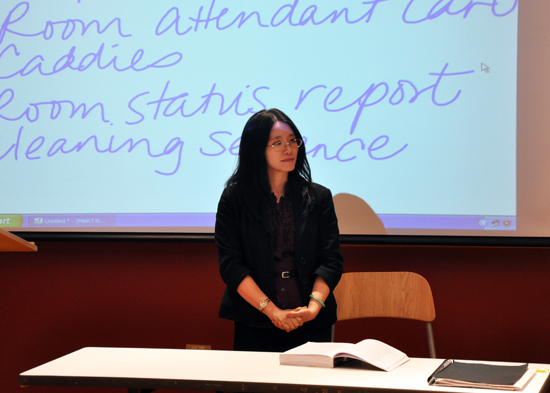 With the song “Walcott,” by Vampire Weekend still playing in my head, (and it has ever since I found out where my field trip was taking place) I approached The Hotel Wolcott for a two-day excursion to assume the role of a housekeeping attendant. The Wolcott, fashioned in big, bold, Beaux-Arts style, opened its doors in 1904 on 31st Street and is just a hop, skip and a jump away from the Empire State Building — making it a popular place to stay for many tourists. After speaking to our class a few weeks ago, Evelyn Chun, the executive housekeeper of the Wolcott, was our fearless leader for all our hands-on housekeeping training. She started off her career at the Affinia Hotel and even worked at the (now infamous) Sofitel where she was a floor supervisor.

Evelyn has been overseeing the housekeeping department at the Wolcott for the past five years. The Wolcott is a privately owned hotel and getting to work in this type of environment is very different from your typical corporate structure. All the little perks that Evelyn enjoys, such as directly purchasing supplies to doing something as she sees fit, are very rewarding. Evelyn, with the help of her two assistants schedules all the workers, controls the budget, orders supplies, and handles any maintenance issue or guest problem that needs immediate attention.

On a side note, The Wolcott still uses an in-house laundry service, a rarity these days as most properties tend to outsource to cut costs. This process makes it much easier for Evelyn to be in command of linen inventory. Housekeeping is easily the largest department of a hotel and it is called “the heart of the hotel” in the industry. Being a housekeeping attendant is more than just placing a mint on your pillow. Performing the daily duties of folding linens and towels, having a spotless sink to creating the perfect hospital corner is not an easy feat by any means. That wild night out with your friends may lead to all kinds of aftermath in how you may leave your room (think "The Hangover").

Creating a room that is always crisp, clean and tidy takes lots of hard work and it can make the difference of someone returning to the hotel for future stays and recommending it to others or not. For our hands-on training, we were paired off with a housekeeper and I had the pleasure of working with Violeta. She has been at The Wolcott for the past six years and she greeted me with open arms and taught me how to fold a pillowcase in so it looks neater, make that perfect crease on a roll of toilet paper and create streak-free mirrors by using hot water rather than Windex — all tricks that I will now attempt at home and put into my own cleaning repertoire. So, many thanks to the Evelyn and her patient staff at The Wolcott for showing us what really happens behind the doors after someone says, “Knock, knock. Housekeeping!”

Day by Day is a Double-Edged Sword