Jenny McCoy's "Desserts for Every Season"

The Birth of a Cookbook

It's the day after the launch of her first cookbook, Desserts for Every Season, and Jenny McCoy's voice is a little hoarse. She’s trying to remember a story about Emeril Lagasse—one of her first jobs was working for the chef at Delmonico, his restaurant in New Orleans. As she reminisces about him, she chuckles, and when she does her eyes are bright, her friendly dimples more pronounced. “He’s been the best chef I’ve worked with. He made a point at the start of every night to walk up to every employee, from the person washing the pots and pans to the chef de cuisine to say hello. He’s so human, generous and approachable. Those are things I took away with me.”

Today, Jenny, ICE’s newest Pastry and Baking Arts Chef Instructor, is an impressive chef in her own right. At age 17 she started the Pastry and Baking Program at Chicago’s Kendall College. Her parents wanted her to go to college or get a job, but she didn’t want to go to a traditional college right away. Despite her parents' worries, Jenny learned a number of important things—about herself—in culinary school.

For example, she works really well under pressure, creating her best work in practical examinations that required her to demonstrate skill and knowledge under the knowing, scrutinizing eye of the chef instructor. “Scare the crap out of me and you can see me do good work,” she jokes. She also learned how to balance confidence and humility—working with a sense of her own skill and understanding, but acknowledging the constant potential to make a mistake. 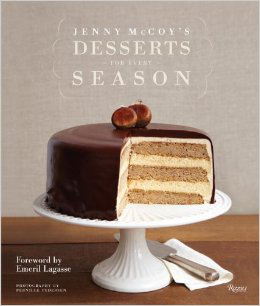 After culinary school, she pursued a degree in food writing at DePaul University, in an effort to overcome the intimidation she felt about creative writing. She then worked for Emeril Lagasse at Delmonico and in his test kitchens, writing for his blog and developing ideas for his television shows as well.

When it came to evaluating her own career trajectory, it came as no surprise that Jenny liked the diversity of doing different (and often new) things every day. “I couldn’t really say I wanted to do one thing over another. I was just interested in everything,” Chef Jenny explains. “I really wanted to be more well-rounded in the industry.”

Her diverse interests and talents have led her to a wide range of impressive accomplishments. In 2011, Jenny helped the team at Craft in New York City earn its second 3-star review from the New York Times.

The following year, she co-founded Cissé Trading Company, a successful line of hot cocoa and baking mixes sold at 500+ national outlets, and was named a StarChefs.com "Rising Star Pastry Chef".

Just this month, she was nominated as a 2014 finalist for the International Association of Culinary Professional's cookbook awards. She has also appeared numerous times as a guest or judge on the Food Network and is in production on a new show slated to air later this year.

Her latest role, Chef Instructor at ICE, springs from a passion she discovered while working with celebrity chef and ICE graduate, Missy Robbins, at A Voce. In addition to developing recipes for the restaurant's menu, Jenny was spending a significant portion of her time teaching the staff how to recreate each dish for service.

In the midst of her hectic schedule, she realized that she particularly enjoyed teaching and thus reached out to ICE about joining our roster of recreational cooking instructors.

“A light bulb just went off—I realized teaching was something I wanted to do,” she says. “I grew to love it more and more.” When a Chef Instructor position for professional Pastry & Baking Arts students opened up, Jenny sprung at the opportunity.

Teaching career students has been a unique opportunity for her to revisit the core recipes that form the basis for any pastry chef's career—and to share her own innovative approach to seasonal baking in our teaching kitchens.