From Isaac Newton to 3D Printed Pizzas: The Science of Food

What do you get when you cross a group of high-achieving specialists in molecular biology, physics, and fine arts with a burning curiosity for the science of cooking? Three best-selling authors and culinary pioneers who are forging our current understanding of the science of food.

At this year's World Science Festival in New York City—an annual series of public events celebrating and exploring the scientific advancements of the past, present, and future—ICE was host to a fascinating panel on the shift in culture, tools, and technology in food sciences over the last 30 years.

Aptly titled "The Science of Food: From Geek to Chic," the event was moderated by Anne McBride, Director of the Experimental Cuisine Collective. The key speakers included Harold McGee (author of renown reference text, On Food and Cooking),  Marion Nestle (author of Food Politics) and ICE alum Maxime Bilet (co-author of Modernist Cuisine). Examining the evolution of society's growing interest in the application of science in cooking, the panel took the audience through the course of time, recounting the catalysts that propelled them from their non-conventional backgrounds to careers in food writing, ultimately renewing society's interest in food.

The talk was peppered with plenty of geek humor while covering a number of interesting topics. A perfect example was Harold McGee's introductory tale, speculating that Isaac Newton probably partook in pressure cooker parties in the 17th century. Unknown to many, the pressure cooker was invented in Newton's time and based on the ideal gas law (remember PV=nRT?). One can only imagine the wild and crazy tailgate parties Newton might have hosted in his time.

As an ICE Culinary Arts graduate, currently externing at Good Housekeeping magazine, what I personally found most interesting were the diverse career paths of each of the speakers. Harold McGee initially studied Physics, Astronomy and English Literature, before receiving his Ph.D. in English Literature from Yale University. He actually stumbled on the topic of cooking by accident, when a friend asked him why red beans and rice gave him gas. While researching the answer, he discovered that science had a lot to do with food and cooking.

From there on, he went on to write a number of best-selling books which have paved the way to our better understanding and appreciation of how to become better-informed cooks.   Marion Nestle earned her Ph.D. in Molecular Biology from Berkeley before becoming an expert on the science of cooking. After being asked to develop some of the first courses on nutrition at New York University a few decades ago, she quickly realized that her scientific background had many ties to contemporary questions about food. Today, she is one of the world's leading experts on nutrition, has authored several award-winning books, was ranked Forbe's #2 most powerful foodie in America (behind Michelle Obama) in 2011, and is one of the world's top tweeters. 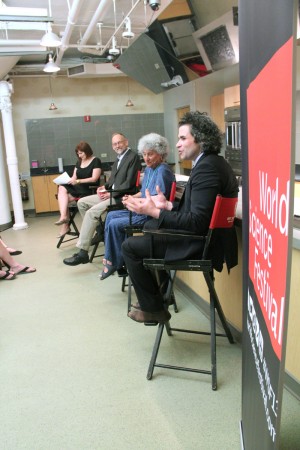 Maxime Bilet is a culinary legend in his own right as well. An alumnus of ICE with a bachelor's degree in English and American Literature, Bilet is best known for co-authoring the revolutionary six-volume book series titled "Modernist Cuisine: The Art and Science of Cooking." Bilet believes the catalyst that shaped his passion in food began at the early age of 2 when he tried to figure out how to use a stove in the middle of the night in an attempt to make hot chocolate. Since then, Bilet never gave up on his quest to learn more about food and cooking. Named by Forbes as one of the "top 30 under 30" in the food and wine industry in 2011, he is one of the leading proponents of the latest movement in molecular gastronomy.

The speakers also addressed the changes that they feel have brought food to the forefront of our contemporary conversations. Food may be fundamental to life, but it used to be treated with such discontent. Yet as the ability to travel and explore the world became more accessible, we learned about more ingredients, realized that food could be cooked a variety of different ways, and used these techniques to create better-tasting dishes.

In addition, the speakers addressed the added visibility the media has given to the question of what to eat. Notably, the rise in national obesity levels and its link to public health risks has spawned a growing movement of food advocacy.

However, our growing interest in food doesn't apply solely to nutrition and health. Involved in a number of initiatives to teach children about food science, Bilet loves to see the excitement of his protégés when he shows them how to make Fizzy Fruits. Made by carbonating fruit with a soda siphon, he uses this as an example to teach them about the scientific properties of CO2 being water soluble.

To Bilet's point, education is key. It began with influential writers and researchers, and today, many colleges and universities are developing food studies programs (Marion Nestle herself is one of the original founders of the New York University's Department of Nutrition, Food Studies, and Public Health).

All the panelists believe the application of science to cooking is only going to grow in the coming years, and that we will see a new kind of chef emerge—one who is not only talented in the culinary arts but who will also able to be an advocate for change. The future lies with more collaboration between science and food, and as this happens, we will see new careers and advancements in food science.

When asked about what they thought about NASA’s latest project to make a pizza from a 3-D printer, the panelists unanimously agreed that it could be interesting. But they did want to know a few things about it first. Would it taste good? Is it nutritious? And if this is a healthy and economical food source, could it pave the way to help end world hunger?

Embracing my inner science geek, I began to ponder everything from the worldly applications of NASA’s 3-D pizza to what kind of dishes Isaac Newton might have made with a pressure cooker back in his day. Inspired not only by the topics covered at this panel discussion, I left the event in awe of the talent and accomplishments of these three authors. I can't wait to dive into all of their books to open my mind to the science of food even more…and maybe attempt to make some of those Fizzy Fruits along the way.