ICE alum Allison Fishman Task is no stranger to the "nine lives" of a food professional, having braved a number of exciting, challenging and dynamic jobs in a relatively short time. 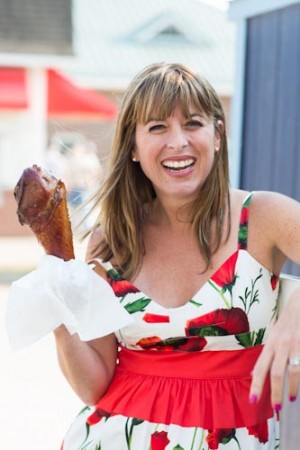 industry, it's easy to meet highly successful individuals who haven't followed a conventional career path. Many food professionals are career changers, and if they go on to work in restaurant kitchens or the media, the turnover rates can be very high, as companies strive to manage the delicate balance of creativity and economics. ICE alum Allison Fishman Task is no stranger to the "nine lives" of a food professional, having braved a number of exciting, challenging and dynamic jobs in a relatively short time.

What were you doing before you enrolled at ICE, and what attracted you to the program?

Before enrolling at ICE, I was the Marketing Director of Viant, an Internet Consulting firm. When I met with ICE Admissions Rep Linda Simon in 2001, she asked me why I wanted to go to culinary school. I told her that I was a terrible cook and had no kitchen confidence, and many of my friends felt the same way. We were well educated, moving up in the corporate world, but had no idea what to do when it came to the kitchen. I knew there were a lot of women out there like me, and I wanted to help my generation become comfortable in the kitchen, and have fun doing it.

My externship was at Jean Georges and Nougatine. The first few weeks I didn't think I could make it, but then I did. It was up there with the experience of running a marathon—I didn't think I had it in me but came out the other end and it was a life-changing experience. A lot of the chefs I worked with there became big, fancy names; Quinn Hatfield, in LA, Gregory Branin, who is still with Jean Georges, or Ryan DePersio, who is a local celebrity chef in New Jersey. Of course, they wouldn't know me if I walked into them, but I still feel like saying "Yes, Chef!" whenever I read an article about them.

After Jean Georges, I took a second externship at Saveur Magazine, then I started recipe testing for cookbook authors James Peterson and Francine Segan. Next, I was hired to my dream job, working for Martha Stewart, where I helped create and launch Everyday Food magazine. From there, I began to work as a TV segment chef at her studio and was cast in the Everyday Food tv show. I left Martha to become the food editor for Atkins—in part, to shorten my commute. (Brooklyn to Westport on a bad day is 2.5 hours each way.) After that, I went out on my own and created The Wooden Spoon Cooking School. I gave private cooking classes to people all across Manhattan, Brooklyn and the tri-state area. I had a blast. That experience led to my being cast in TLC's Home Made Simple, where I traveled the country teaching people to cook. It was a fix-it show, so there was me, a handyman and a decorator; we helped people take charge of their homes.

Next, I was cast in a different kind of fixer-upper shojavascript:void('span')w: Lifetime's Cook Yourself Thin, where I helped women re-create healthier, homemade versions of their guilty pleasures (think: enchiladas, pizza, lasagna). It was a blast.

Most recently, I was asked to host Yahoo's Blue Ribbon Hunter, where I travel the country looking for unique, outrageous, and blue ribbon winning food. I've been doing that for the last two years, while also working as a columnist and spokesperson for Cooking Light magazine, and a spokesperson for LeCreuset cookware. I've also published two cookbooks during the last two years: You Can Trust A Skinny Cook, and Cooking Light Lighten Up, America! 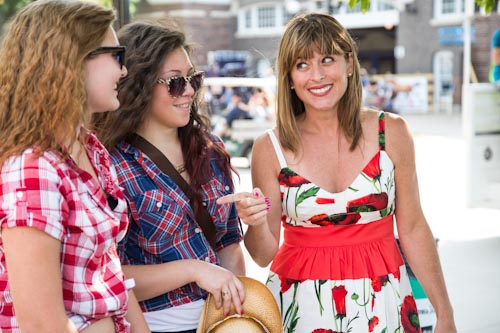 Depends on the day. Gosh—really, every day is different. Last Sunday I drove down to QVC for the first time and was an on-air guest on David Venable's show. (He's a force of nature! I was there representing LeCreuset and in 8 1/2 minutes, we sold 1,000 pots. That was a pretty crazy experience.) Other days I'm on the road, heading to food festivals like the Memphis Barbeque Cookoff, the Eelpout Festival in Walker, Minnesota or the Great American Pie Festival in Celebration, Florida. Every day is different. It's a blast. It's a joy—and I know that I'm lucky to have it. I am thankful for every single day that I get to work.

Five years ago, did you ever think you¹d be doing what you¹re doing now?

No. But then again, I remember talking to a friend, and saying (and I'm pretty sure I'm not the only one who has said this), "I'd love to have a show where I travel around, tasting the best food in America." When the opportunity presented itself—and I literally had to get on a plane for our first shoot in 24 hours—I knew enough to say yes. I think that's what's key. As they say, luck favors the prepared mind. So you've got to dream big, move towards it, then say "yes, please!" when the opportunity presents itself. 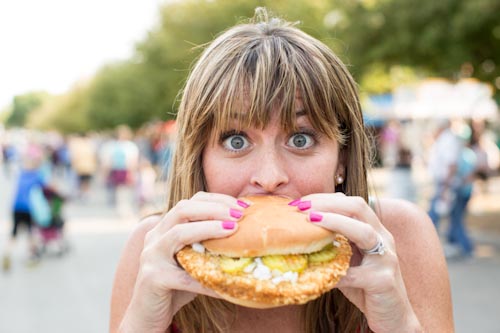 Man. You just called my bluff to the last question. Hmm...2018. My twin boys will be five. I hope I'm still standing. I'd like to have a radio show about feeding the family. I've been talking about having a radio show for years, but now I'm putting it out there. Everyone tells me it's hard, but then again, they said the same thing about TV and cookbooks. I am not afraid of doing something hard!