ICE at Beard on Books

One Wednesday each month, the famed James Beard House opens their dinning room to an author who comes to discuss their book with the audience. Beard on Books has hosted famed chefs such as Thomas Keller and David Chang as well as renowned writers such as Betty Fussell.

Yesterday, they hosted ICE’s own Rick Smilow and Anne E. McBride, who discussed their book, Culinary Careers: How to Get Your Dream Job in Food. ICE has a close relationship with the James Beard Foundation. ICE’s founder, Peter Kump, also helped found the James Beard Foundation. Nowadays, ICE students frequently volunteer at Beard House events and often receive scholarships from the foundation to work on their educational goals.

Yesterday, the tone remained educational as Smilow and McBride talked about the lessons in Culinary Careers, a guide to the world of working in the culinary industry, with 89 interviews with professionals working in a wide variety of positions. For example, Smilow described the four types of motivating passion he felt are used as “entry ramps” to the industry.

The first is a love of the action, energy and teamwork in a kitchen, saying, “It’s almost like a sports team.” The second is a love of food and eating. Third is a love of hospitality and making people happy. The last is a feeling that this is what you are meant to do. Smilow felt that any of the types of passion could lead someone to the culinary industry, but people who are the most successful in the field develop all four at some point in their career. 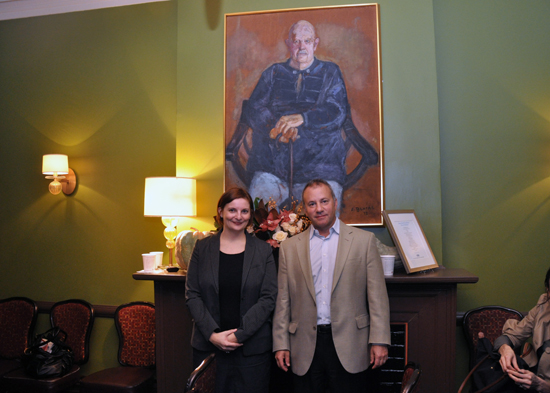 Not only did they discuss the content of the book, but also their experience writing it. They described the process of interviewing the professionals as a chance to have them speak in their own words. McBride said it was a chance to “hear the voice of someone who had been doing it a long time.”

In the process they found that everyone loved their jobs and being part of the food world. McBride said, “I was able to take away a lot of positive energy by talking to these people.” When asked what they took away from all those interviews, she added, “I took away that everyone loved what they were doing. Everyone was happy. It sounds corny, but that really touched me.”