The annual Action Against Hunger Gala was held at Guastavino's this week.

For almost a decade, ICE students and chefs have participated in the event, working to raise money and awareness for Action Against Hunger’s efforts to alleviate world hunger. 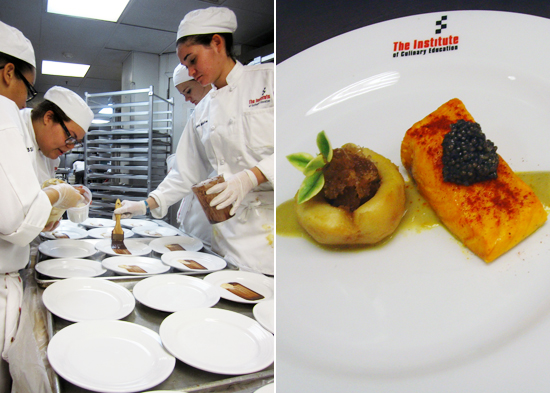 ICE President Rick Smilow sits on the organization’s Advisory Council, working with philanthropists from across the world to help save lives and end malnutrition. Proceeds from the evening go to support Action Against Hunger’s programs to provide emergency food relief, clean water and sanitation, as well as long-term hunger solutions in over 40 countries around the world.

This year, Chef Philippe Massoud of ilili combined his passion for food with his dedication to giving back and took on the role of head chef for the evening. Massoud has been closely involved with Action Against Hunger since he founded the Dine Out Haitifundraising campaign in 2010 and raised over $90,000 to help feed the people of Haiti after the devastating earthquake in January of that year. This summer, he spearheaded Dine Out Irene to help devastated farmers in upstate New York.

Next, Massoud is hoping to create Dine Out Africa to raise funds for the food crisis in the Horn of Africa. He said, “This is not so dramatic as Haiti, but it is such a terrible tragedy and it is still going on.” The Gala was a chance for Massoud to use his culinary talents to raise funds for the causes he cares so much about.

ICE students showed off their skills helping with the menu, working with the three chefs preparing the menu to serve over 300 people who gathered for the benefit. To start, the students worked closely with ICE Director of Student Affairs Chef Andy Gold to prepare his dish of Saffron Dusted Salmon and Poached Pear with Raz el Hanout, Smoked Yellow Pepper and Eggplant Puree Preserved Lemon and Shallots, Emerald Crystal Lettuce, and Paddlefish Caviar. For the main course, Massoud prepared Steel Cut Oats Bi TFine with Five Onion Confit and Pickled Zaatar.

Ilili pastry chef and ICE alum Melissa Camacho prepared a Date Cake with Coconut, Carob, and Chocolate for dessert. We are always proud to be part of an industry that gives back to others and this was no exception. ICE students and staff were grateful for the opportunity to be part of the benefit and support Action Against Hunger’s powerful work.