The drizzling rain didn’t stop over 225 alumni from celebrating their achievements. Guests traveled from far and wide and included alumni spanning ICE’s rich 35-year history, to remember where it all began and reunite with old classmates, friends and teachers. Highlighting the evening was the induction of 27 alumni into ICE’s Alumni Hall of Achievement. This year saw the total number of inductees rise to 77.

Among them are James Beard Award–winning chefs, respected caterers and famed food writers, as well as educators, sales managers and others finding success in the culinary world. The event showcased the diversity of career paths taken by ICE alumni. Graduates from our programs are also using their education to go many different places and the Hall includes representatives from as far away as Singapore, Dubai and Japan. 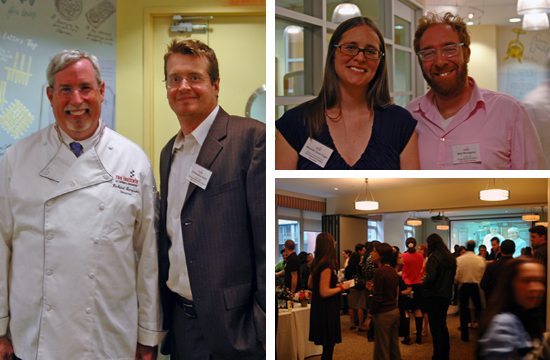 The inductees also included Gail Simmons (Special Projects Manager, Food & Wine, Judge, Bravo’s Top Chef series, NYC), Juliette Pope (Beverage Director, Gramercy Tavern, NYC) and Edward Behr (Founder, The Art of Eating, Peacham, VT). The party was more than a chance to celebrate our most notable graduates; it was also a chance for alumni to reconnect with their Chef Instructors, friends and ICE Staff. Guests quickly found their way into the 6th floor kitchen, mingling and tasting right over the very stoves by which they learned the ropes of the culinary world. The school couldn’t be prouder!

To see all of the inductees, check out the Alumni Hall of Achievement.