How to Become a Personal Chef

ICE alumni start their own businesses.

Two ICE alumni have recently started their own personal chef businesses, taking lessons from the classrooms into their careers. They explain how they got started and share their thoughts on pricing and kitchen must-haves.

Kathleen Lewandowski (Culinary, ’07) started her career working in magazine publishing as an art director and could often be found styling food for photo shoots. Her colleagues consistently asked her why she didn’t pursue culinary school since her food creations always looked so good. Then one day a brochure from ICE landed in her mailbox. “I was like: ‘It’s a sign,’” she says.

Kathleen, who enrolled at ICE at the age of 42, kept working in media until she was laid off in 2009. That was the push she needed to pursue a culinary career full-time, and last May she started her own health-focused personal chef business, Kathy Is Cooking. 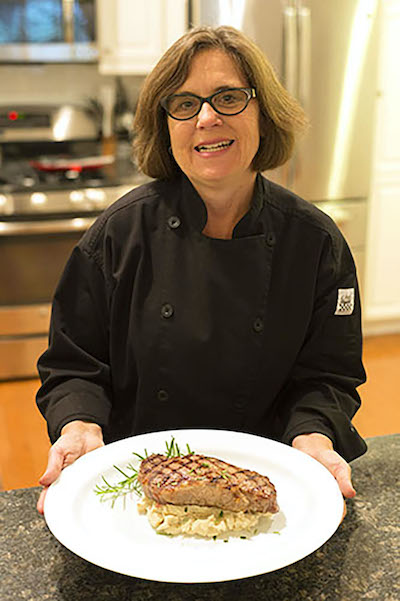 Stephen Lampshire (Culinary, ‘19) was working in ad sales for a science journal in London, eventually moving to America when a position opened up in New York City. But he hated his job.

Stephen’s mother was his culinary inspiration. While his dad was in the army, his mom would cook huge meals for all the officers and their wives. At home she made an amazing lasagna. So when she died of cancer, Stephen thought, “Why am I doing a job I’m miserable in?” — so he enrolled at ICE's New York campus.

“Unless you’re some savant, culinary school is absolutely necessary,” Stephen says. “You have to go and learn the skills and get the advice from people who have worked in kitchens all their lives.”

Stephen took what he studied at ICE and is now applying it to his personal chef business, The Private Kitchen, which he launched this August. He’s still making some of his mom’s recipes, like her moussaka, and is using her 40-year-old cookbook to help him with his new venture.

Culinary school isn’t just for people who want to train to become head chefs at Michelin-starred restaurants. Kathleen and Stephen enjoyed cooking in their personal lives but neither had any professional experience before coming to ICE, and neither aspired to work in restaurant kitchens after graduation after completing their Culinary Arts degree programs.

Stephen, who came to ICE in his early 30s, externed at Marley Spoon, Martha Stewart’s meal delivery company, and would work there full-time after graduating. He liked the idea of creating his own recipes so later he worked for a personal chef service in New York. After doing that for two years, he decided, “I could be doing this on my own and keeping all the money.”

Kathleen got her start as a culinary demo specialist at Whole Foods, cooking both in-store and off-site. Her position got axed after Amazon bought the grocery chain, and that’s when she started thinking about running her own business. It wasn’t until a friend told Kathleen they knew someone in need of a personal chef that she would go down that route.

Getting Started as a Personal Chef

Stephen was able to take some clients with him from his old personal chef gig when he started his solo venture. He said the first thing he did was file an LLC and learn how to keep client records and finances.

“What I’m trying to do is just take on a few clients at first, see how it goes and just learn from that,” says Stephen. “Just try and not overdo it straight away.”

For Kathleen, the most important thing she did at the start was hire a good accountant.

“Think about every move you’re making with your business,” she says.

Kathleen got her first client with the help from a friend, but to get — and keep — the business running, she needed to know what to charge. So she called ICE’s then-Director of Career Services Maureen Drum Fagin (who’s now Director of Compliance for both NY and LA campuses) to get some advice.

“Alumni affairs have been really helpful in getting some of these gigs that I’ve gotten,” Kathleen says.

ICE’s career services team helped Kathleen understand what to charge for her work when she first started her business, and ICE’s job board was a helpful tool she used to find new clients.

“You can’t start out the gate thinking you’ll be getting over $60 an hour. Now that I have almost two years of experience under my belt I’m going to go into that range,” says Kathleen, who works in Northern New Jersey. “You can’t undervalue your time. That’s the most important thing.”

Keeping clients isn’t all about the quality of your product. It’s also about personality, adds Stephen, who also works out of New Jersey, emphasizing the importance of getting clients to like and trust you since you’re going into their homes. “You can’t just be a good chef. You have to be a switched-on person,” he says.

Kathleen also recommends meeting and speaking with other personal chefs in your area. “Once you get involved with other people, they pass along people your way when they can’t do jobs.”

The Tools You Need for Personal Cheffing

Stephen works out of his home kitchen and drops batches of meals off to his clients, saying it’s more efficient to work from home and that his customers actually prefer he work elsewhere, as kitchens are often a household hub and people can be in the way.

He says he’s using eco-friendly bags for his drop-offs, and that he’s considering hiring a driver to manage deliveries so he can spend more time cooking in the kitchen.

Kathleen does some prep work at home, but she works mostly in her clients’ kitchens. She’ll bring anything she thinks she might need on the first trip to a client’s home, and she’ll continue to do so until the customer gives the OK to use their equipment.

“If people offer, then I’m comfortable with [using what’s in their kitchen], but I’ll probably still bring my knives, my towels, things I feel comfortable with,” Kathleen says.

Developing a menu is a collaborative process. Both Kathleen and Stephen will go back-and-forth with their clients to understand their likes, dislikes and any dietary limitations to create a custom meal plan.

For Stephen, one of his most essential kitchen tools to create satisfying meals for clients is his cast iron pan, something he uses for searing and roasting meats and vegetables. And since he’s running his own business, he also understands the importance of food safety — how to heat up foods to a certain temperature and cool them down properly — knowledge he picked up at ICE.

“All that’s not stuff I would’ve known before coming to school,” Stephen says. “Now I’m on a different level.”

Beat The Chef: ICE Student and Chef-Instructor Battle in the Kitchen