Julie Resnick (Culinary Arts) didn’t start the feedfeed with the goal of creating a behemoth crowdsourced food Instagram account with a following of over one million enthusiastic foodies. Her initial motive was simply to swap recipe ideas and to find inspiration for ways to use her weekly allotment of CSA (community supported agriculture) goods. Something like, How about a new way to prepare those sweet potatoes? But her education from ICE — which helped give her the ability to recognize truly good food and innovative preparations of it — along with her background in digital marketing, led to the creation of a community that self-selected foodies and talented photographers were clamoring to join.

Luckily, the barrier to entry was easy — simply tag #feedfeed in your Instagram photos. Feedfeed seemed to fill a void in the food media realm. It was a call to action for home cooks and food photographers to share gorgeous images of meals made with vibrant, seasonal ingredients. We were thrilled that Julie took the time to chat with us for the ICE blog, to reveal what it’s like running a massively popular Instagram account and website, and to disclose her “worst nightmare” of a meal (a bowl of cereal).

When did you decide to study at ICE?

That seems like a big commitment. You have to really want it.

It was competitive because most people were professionals who were in that same state of trying to decide or had made a decision to no longer be an accountant or a lawyer or dentist. Also, everyone was a little older than the typical student age because they had already had a bit of a career.

What was your weekday job? I worked at a digital agency, which I had founded. My background was in digital marketing. After college, I started out at a big agency that was one of the first to build websites, back when e-commerce websites were just starting up.

That’s what ultimately led me to create feedfeed. I was one of the only people in my culinary school class who didn’t end up making the career change. I was super excited to finish the program and graduate with my classmates, but by the end, my career in digital had taken off, and the agency where I was working was doing exciting things. I continued cooking at home.

I went on to get married, had kids and then we moved out of the city to Amagansett. I started changing the way that I cook and the way that we eat when we became part of the local farms and CSAs where you get a weekly share from a farm.

So I basically stopped going to the grocery store. Each week you get a bag with onions, carrots, sweet potatoes, chicken and having to work with just those ingredients is what inspired me to start feedfeed. I was using the same ingredients week after week, and with three kids you want to make sure everyone is excited about dinner and not just like, Mom, I don’t want to eat sweet potatoes again.

That was what ultimately led me to connect with other people on social media who cook the way I cook and who were using local and seasonal ingredients in their day-to-day cooking. It helped me get ideas for ways to cook instead of leaning on major food publications. Because really, how deep are they going to go with ideas of what you can do with sweet potatoes. I came back to food through a need I had and a connection with other people through social media.

I came back to food through a need I had and a connection with other people through social media.

It started on Instagram as a call to action. Initially, I began posting pictures of my own food and then asked people to share what they were making by also tagging their food with #feedfeed. That started to develop that community of people who were cooking the way I was.

So I was connecting with people from all over the world. Maybe I would do a search for sweet potatoes and find some really cool sweet potato dishes, and I would follow those people and engage with them and comment on their posts.

Then I would say, Hey, by the way, don’t forget to add #feedfeed to what you’re cooking and that way we can all share with each other. It was my need that was driving it. It took off from there.

That was back when no one else was tagging. Now I feel like everyone is tagging and asking people to tag whatever to be featured. As more people started sharing with the hashtag, it became obvious that the content was amazing, and I didn’t want it to disappear in feeds and get forgotten.

If someone makes something really amazing with sweet potatoes, why shouldn’t we catalog that and organize it on our website? Once we had a lot of content on the hashtag, we decided to start the website — to catalog all of the great recipes by ingredient or by topic. 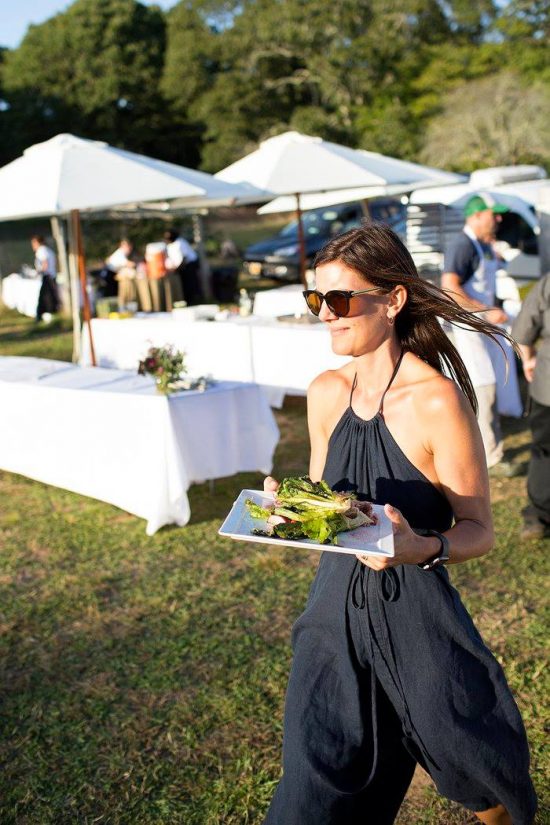 The feedfeed seems to have been one of the first to utilize hashtagging. Then you have others like Infatuation, but that’s a different audience.

The hashtag #eeeeeats existed as a hashtag and was out there before we were, but because we didn’t live in the city, I wasn’t aware of them when we started feedfeed. Later we realized they were doing the same thing but on the restaurant side.

With all the different editors and types of feeds — from vegan to cold soups to French food to sandwiches — how do you manage to control the aesthetic and the content?

First, we reach out to people or they reach out to us because they have a passion or expertise, like brownies or chocolate or Spanish food. We use those people to help us find really good posts. Then once everyone sends in their selections, we have an internal team vetting the content and making sure it’s meeting our standards.

Molly [Adams], who works for me, also went to ICE (she graduated from the Culinary Arts program in 2009). I found her by reaching out to ICE Career Services and asked them to post a job. At the time she was working as a private chef and reached out to me. It’s hard to find people who really get food. They cook but not at the level of someone who attended culinary school.

So that was really important to me from the beginning — to find someone else who could look at a recipe or a picture and say, That’s really good and interesting and here’s why. Molly looks at everything and we have a couple of other people on our internal team who help us.

Right, because there are a lot of things that are popular, but that doesn’t necessarily mean they’re good. Like if I see another picture of a rainbow bagel…

That’s a good example — if we were to post a rainbow bagel, we would find one that we think is interesting or a story behind it. Like the person used freeze-dried blueberries and beets to dye the dough. That’s the other thing about us as a publication: When we look for something to post on our website or Instagram, we think, What is it that makes this unique?Would you have ever thought to make this?

But we have amazing vegan cooks in our community who are pushing the boundaries. We see that post as an opportunity to tell people that they can do more with spaghetti squash than treating it as an alternative to pasta.

I guess you could say you have more freedom because you don’t have bottom lines to think of as much as a big publication under a larger media company.

We’re looking at content and creativity. Obviously the visual, too: The photos have to be at a certain level to post it. Often we’ll see something we love but the picture isn’t at the level we need it to be. We’ll remake it and develop a recipe for something we saw on our feed.

Did you have a social media strategy or has it been an organic process?

Definitely organic. My career has been in helping brands to translate their real-world brand into the digital space, and as digital developed into social, I’ve figured out social media strategies for brands. I think like most startups, we look at what’s working and do more of that, and look at what’s not working and think of ways to make it work better. Our main focus from the beginning has been making connections and building a community of people who really enjoy each other’s food content and like to share.

Growing up, was food a big part of your family life?

Yes. I grew up in Texas and my mom made dinner every night. I always loved to eat, I love good food. When people ask, what do you hate, there’s really nothing I can think of. I helped my mom in the kitchen quite a bit. Then when I went to college, I couldn’t eat the food in the dorm, and I wasn’t one of those people who would say, Oh I’ll just have a bowl of cereal for dinner.

That’s my worst nightmare. If our kids are in trouble — all of our kids love to eat — we’ll say to them, If you don’t listen, you’re going to get cereal for dinner, and they’re like, Noooo! That’s how I was, too. I need something savory and delicious. So in college, I started cooking as a necessity.

How did ICE prepare you for your current role as founder of feedfeed or other aspects of your life?

It helped me with the ability to throw together a really nice meal quickly. Having the basis of the techniques, plus knowing the flavor profiles and pulling them together. Another thing: I’ve always had an idea for a restaurant — especially living out here, because we don’t have a lot of options. When we go to the city, I always say Let’s have Indian, or let’s have some Korean food or Thai, because we don’t have those types of restaurants out here.

For our readers that are trying to build their brands via social media, what advice can you offer?

First, I would say that it’s important to be active on social. Don’t just spend time composing a beautiful, well-lit shot, posting it and then logging out of Instagram or whatever social media platform you’re using. Spend the time looking at what people you follow are posting, like the content and comment on the content.

I think there’s also this perception that you shouldn’t be following too many people — I disagree with that. If there are people out there who are putting out nice content that you’re interested in, follow them, engage with them and get to know the people behind these accounts. Read what these people are writing, don’t just look at the pictures. It’s about relationship building.

ICE Alumni Had Some of the Best Restaurants in 2021